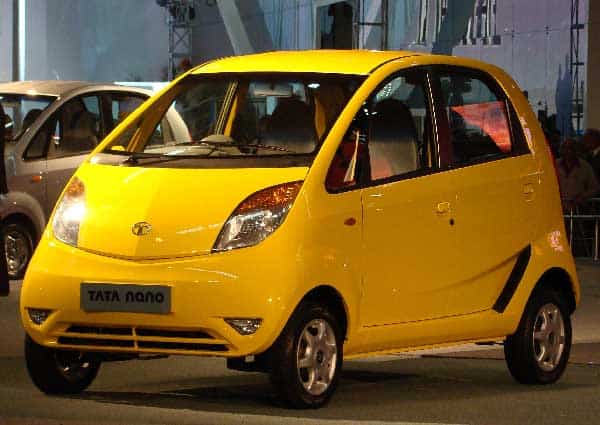 In today’s struggling economy, when prospecting the market to buy an automobile, most people want to know what is the cheapest automobile in the world is. Often times, what people fail to realize is that less expensive vehicles don’t necessarily mean good cars. Or safe ones. Or even reliable ones. Also, because of poor functionalities, low-priced vehicles can end up costing more, because of poor quality failure and expensive insurance policies. That is to say that the automobiles we’re referring to aren’t the cheapest cars to insure. Read more about Tata Nano, the cheapest car in the world.

So what is the cheapest car money can buy?

With an impressive base price of around $1,600, Tata Nano was the first small-sized automobile that was especially designed for India’s middle class. In a way, it was an attempt at convincing Indians to quit driving 2-wheel motors.

Before creating the Nano, Tata Motors had previously launched a truck, the Tata Ace, which also came at a competitive price and which benefited from a high degree of popularity. Consequently, the brand produced the Nano, which has been in production since 2008.

This model’s specs include a 2-cylinder SOHC petrol Bosch 624 cc engine, responsible for delivering 37 hp, and a 4-speed manual transmission. The maximum speed of the vehicle is 65 mph and its combined fuel efficiency stands somewhere around 60 mpg.

As a small-sized automobile, Tata Nano was initially considered to be among the most popular choices of India and the rest of the world. During the first 2 to 3 years that followed its launch, it was sold in decent numbers, but, as of 2012, it was announced that its sales had notably dropped. At the end of 2013, The Wall Street Journal wrote an extensive article about the reasons why the world’s cheapest vehicle Tata Nano had flopped.

What Tata Motors failed to realize was that people who have the money to buy an automobile and choose a model for the first time in their lives are indeed focused on spending as little money as possible, but they won’t go to the extent of endangering their safety or of lowering their overall driving experience. The Tata Nano was designed so basically that it featured only one windshield, no air conditioning whatsoever and no integrated sound system. Moreover, the vehicle had a low amount of steel, which automatically made it less safe to drive. The Guardian speaks about the safety tests that the Nano miserably flunk.

Another noteworthy detail is the fact that the model came equipped with one type of engine alone, which ran on petrol. Since diesel was always a popular option among people focused on fuel efficiency, its complete absence is a serious disappointment. In January 2014, it was announced that Tata Motors had set on revolutionizing the Nano, by turning it into a brand new model which also featured a diesel engine, says CSMonitor.com

How about a cheap vehicle that you actually like? Here is a list to help you choose :


The truth is that cars that are safe, fully functional and reliable don’t come too cheap. Almost all models we’ve looked for are close to $13,000 or over. However if you don’t want to spend too much money on a car, but still want to feel like you’re in a car instead of a cardboard box, The Telegraph recommends you purchase one of the following vehicles:

We stand by the list developed by The Telegraph, as it contains most of the automobiles that are cheap but don’t fall off standards. For people with more than a limited budget at their disposal, other three remarkable options could be: Toyota Yaris, Nissan Versa, or Ford Fiesta.