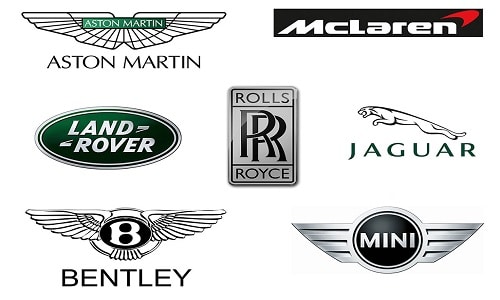 British cars are an integral part of the European automotive industry. Mostly known for luxurious models, they remain nonetheless popular for their design, quality and overall performance. The list of British car brands include Jaguar, Mini, Aston Martin, Rolls Royce, Land Rover and Bentley. One of the largest mass-produced car manufacturer remains Vauxhall. McLaren is most famous for the sports vehicles it has been producing for decades.

These are the top currently active auto manufacturers to date.

Part of the Jaguar Land Rover consortium, this manufacturer has known a very complex history. Founded short after the end of the first World War, the whole Jaguar Land Rover knew 2 consecutive mergers, before being acquired primarily by Ford and recently by Indian Tata Group.

A trademark in the area of luxury cars, Jaguar is planning on developing new models that use recent technologies (most certainly, the possibility of electric vehicles will be explored). For fulfilling this purpose, the group will be opening an extensive research centre within the university of Warwick, Coventry.

For the time being, however, the brand enjoys public acclaim thanks to its XE version, the first model built using modular architecture. It is the same model that will be the object of a Stella McCartney collaboration: a number of models will be draped and sold in a distinctive Superhero print, part of her 2015 collection.

The other half of the famous namesake consortium (Land Rover Jaguar), Land Rover is the only brand that dared to challenge powerful American SUVs when it first came out.

The brand found inspiration in the American Jeep for the creation of the first all-terrain vehicle.

Newer models, such as the Range Rover, the Range Rover Sport, Range Rover Evoque or Discovery benefit from immense popularity, especially due to association with famous stars such as Victoria Beckham (for the Evoque).

In spite of being a pricier vehicle, its well-renowned performance and exquisite design place it among top preferences when it comes to modern SUVs.

Moreover, the Range Rover occupies second place in the top automobiles in 2014 worldwide.

In its early beginnings, the Mini was a small economy automobile, iconic for the middle class in UK. Nowadays it is manufactured by German BMW, which has only kept the name, but radically transformed the entire structure.

Its distinctive design, combined with the above average performance, made the brand extremely popular to people living in urban areas. With 8 different models undergoing continuous production, this automaker looks like it’s here to stay.

2014 also comes with a reinvention of the former Mini Cooper, the Mini Cooper S.

Another famous sports car from Britain is the Aston Martin. Part of many Hollywood productions that underline the brand’s exquisite design and dynamics, this car remains emblematic for luxurious expensive vehicles.

Beginning in Great Britain, the brand has also known American ownership from the auto giant Ford, for more than a decade.

The 12 models that this company is manufacturing at the moment are sold worldwide. The older models continue to be auctioned for flabbergasting prices, while newer ones give buyers the possibility to personalize them. For instance, the Vanquish Carbon Edition shows off with a unique identity, combining carbon fiber in the exterior and a Bang & Olufsen audio system in the interior.


Bentley has been known as destined for the financially potent ones. Being the sole provider of limousines for the royalty in UK, one may be inclined to believe it’s exclusively the apanage of the rich.

Nonetheless, more and more high-class vehicle lovers worldwide indulge in the pleasure of buying a Bentley, notably known for its lush and spacious interiors. The Mulsanne luxury sedan was chosen as the “best luxury car of the year” in 2013 by the public in Great Britain.

This automaker was part of the Rolls Royce consortium, before being finally acquired by Volkswagen in 1997.

Volkswagen ultimately acquired Rolls Royce Motors, the company founded in the seventies. In 1998, the brand was sold to BMW, which continued to sell the Rolls Royce limousine under the same name.

Rolls Royce sales are known to be less substantial than the Bentley ones, proportion being 1 to 2. Nonetheless, the company remains emblematic for exquisite luxury. In fact its newest version of Phantom even features an 18 karat gold exterior and interior. Rolls Royce took British cars to an exception height.

McLaren has mostly been known for its involvement with Formula One. By using the technology specific to race cars, McLaren managed to achieve impressive performance. It was this technology that ultimately imposed this vehicle as a trademark for sports cars, in general.

Present model P1, remembering McLaren’s F1, brings a dramatic improvement to both look and feel. The majestic, futuristic design, combined with the charismatic carbon filter interior, definitely make it one of the most desirable sports cars to own.

Other Active Auto Manufacturers from UK

These are some other currently active automakers from UK that are not very popular but they exist in the market.

AC Cars, formerly known as ‘Auto Carries’, is the oldest British car manufacturer. It has been manufacturing vehicles for more than 110 years and still continues to create impressive rides that will simply blow away your mind. For now, the company hasn’t been manufacturing any vehicles, but after signing an agreement of a joint venture with the US, it might be possible that a new model might be released this year.

Ascari Cars is an automobile manufacturer based in Banbury, UK that mainly specializes in creating sports vehicles. The company was established back in 1995 and introduced its first model in 1998. Soon after releasing the Ascari Ecosse, the company was purchased by a businessman and now focuses on manufacturing road and race cars.

The BAC is a sports car manufacturing company based in Speke, Liverpool. The company was mainly created to manufacture sports vehicles with a central-seat format to provide a better racing experience for race enthusiasts. The company introduced its first vehicle in 2011 which has even made its appearance in the popular racing game ‘Need for Speed: Most Wanted’.

Caterham Cars is an auto production company that specializes mainly in producing the most lightweight sports vehicles. The company was founded in 1963, originally launched in 1973 and introduced its first vehicle in 1974, named the Caterham 7, which is regarded as one of the most iconic sports car of the 20th century. Apart from sports cars, the company manufactures normal road vehicles, the most popular being the Caterham 21.

Ginetta is another company that manufactures sports and racing cars. The company was founded by the Walklett brothers back in 1958 and introduced its first vehicle, the Ginetta G1, in 1959. The company originally started gaining popularity during the 70s and 80s and now holds a good position in the auto racing industry.

Invicta is a popular automaker that has gone through many incarnations. It was first founded in 1905, but didn’t last a year. Then, it was bought back again in 1913 to 1914. After that, the company shifted to Chelsea where it lasted from 1925 to 1950. Then, after 54 years, the company was reincarnated once again in 2004.

These are the defunct automakers from UK, who could not survive and ultimately had to close down. Nonetheless they were an integral part of the British automobile industry.

Alldays & Onions was a merged automotive organization of William Allday & Co. (formed by William Allday in 1720) and Onions (formed by John Onions in 1650). The company started manufacturing vehicles back in 1904 and went on till 1914. Soon, after gaining a lot of success, the company decided to merge with Enfield.

Belsize Motors was an automobile manufacturer based in Manchester, England. The company first used to build and sell bicycles, but then soon enough, after joining with Marshall & Company, introduced its first vehicle in 1901. The manufacturer continued production till 1917 and introduced an after-war vehicle that gained a lot of popularity. However, due to some unknown reasons, the company was told to seize production and soon ended in 1925.

Chater-Lea was initially a motorcycle and bicycle manufacturing company in Letchworth, Hertfordshire. The company made cars between 1907 and 1922 and bikes from 1903 and 1935. The company shut down in 1922, but stopped manufacturing vehicles. Later, in 1927, after William died, Chater-Lea was taken over by his sons. However, it was unable to meet production deadlines and ended up in loss, thus causing the company to come to an end.

James and Browne was a popular automobile manufacturer that was based in Hammersmith, London. The company manufactured vehicles from 1901 to 1910 and was one of the first few companies to introduce the steering wheels in their vehicles.

Hope you learned about the all British car companies from this list and enjoyed seeing the logos and pictures. We also have a list of all car brands by country that you might want to check out.