Skip to content
Home » Car Brands that Start with U 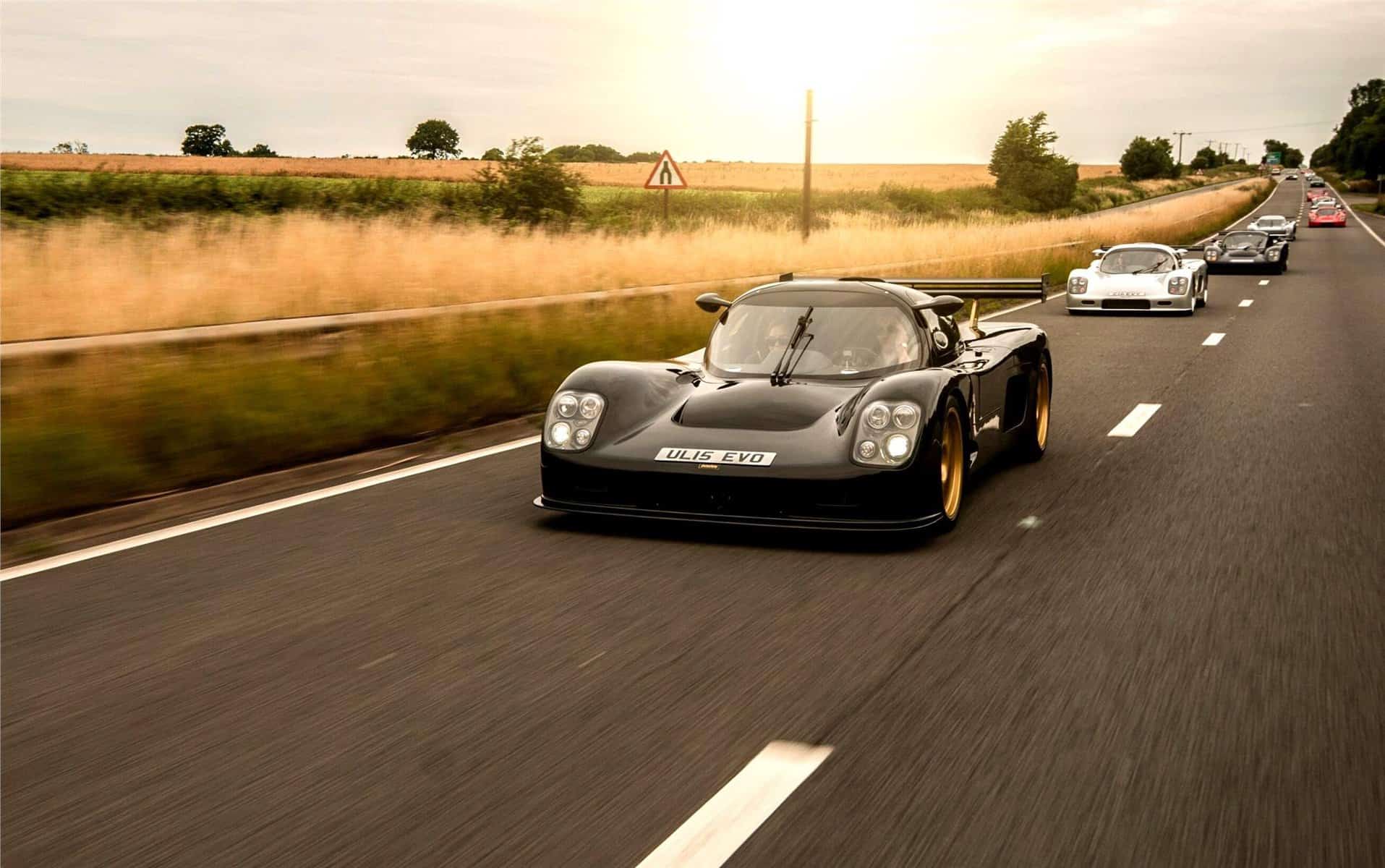 A good day to you, car enthusiasts, wherever you may live. Are you in a good mood today? You will be shorty, because as it turns out, we’ve got an interesting challenge for you.

Here’s a question: how many car brands whose names begin with the letter U do you know?

If the first five seconds seem like a breeze, as you feel confident enough some names will pop on your mind, you will quickly realize this is one tough job.

As you brainstorm to come up with at least one name, allow us to make it easier for you, as we all learn together more things about the car brands bellow.

Truth be told, there are only a few manufacturers that fit this criteria, so feel free to offer any other suggestions, if you feel like some names are missing from this list.

Ulyanovsky Avtomobilny Zavod, better known as Russian company UAZ, is an automobile manufacturer based in Ulyanovsk, that’s known for manufacturing off-road vehicles, as well as buses and trucks.

The UAZ facility was founded in 1941 following the German invasion of the Soviet Union in WWII. As a direct response to this threat, Joseph Stalin ordered the evacuation of strategically crucial industrial centers to the East and the relocation of automotive manufacturer ZIS to the town of Ulyanovsk.

Safely out of reach of the German army, the company initially focused on delivering artillery shells and automobiles, with the ZIS-5 three-ton truck being the first to roll out the factory gates.

In 1954, production was expanded to include the GAZ-69 assembly by using GAZ components, and by 1956 the entire manufacturing process of the model was handled in-house.

Although UAZ is best known for the UAZ-469 utility vehicle, modern times has seen the company made an impression, as well.

In 2005, the UAZ Patriot trucks were being launched – the first brand new models of UAZ since the fall of the Soviet Union. Following various updates and upgrades, the Patriot would end up receiving the first Russian diesel engine to meet Euro-4 Standards.

In 2014, a test drive proved that the UAZ Patriot is a very reliable truck. It crossed winter roads and frozen tundra of the Sakha Republic, becoming the first vehicle to cross the 73rd parallel north moving under its own power.

Ukrainian Automobile Corporation JSC or UkrAVTO is a Ukrainian automobile manufacturing and service company but more importantly this company is the country’s largest automobile distributor.

The Ukrainian automaker can be traced back to 1969, with the Ukraine Motor Vehicles Maintenance Department representing the starting point of this car brand. The conglomerate was meant to handle various car manufacturing, parts, sales and maintenance agencies and, by 1995, it was fully privatized.

By 2002, this brand was taking over automobile manufacturer ZAZ and a few years later the Polish Daewoo subsidiary.

In 1992, British car manufacturer Ultima Sports Ltd was formed by Ted and Richard Marlow. Ultima was based in Hinckley, Leicestershire and the British firm was focused on the design and manufacture of high-performance automotive components and their own sports cars as well.

In the beginning, the company’s goal was to produce an affordable supercar and assembly took place at Noble Motorsport’s facilities, but the Ultima GTR and its various upgrades ensured a high level of popularity for the brand and that meant orders kept coming in.

The Ultima was meant to be faster than any other road car around, but more interesting: the straightforward design and construction would allow rivers to build ta supercar of their own, at a lower cost than other established companies would allow them to.

Delivered in component form, the Ultima GTR featured an engine from the specialists from American Speed. It all started with 640-hp Chevrolet small-block V8 built, although recent upgrades allowed the Evolution variant of the model to benefit from 1,020 hp.

The Ultima GTR720 managed to set the lap record at the Top Gear Test Track lap with 1 min 9.9 secs, which was faster than the 1 min 10.7 secs Michael Schumacher achieved behind the wheel of his 1.8-million Ferrari FXX.

Who would have thought we would stumble upon a representative of the Portuguese automotive industry in this list? UMM – or União Metalo-Mecânica – was a steel plant, which also had an eye on automotive manufacture.

Founded in 1977, the company’s cars were mostly all-wheel drive vehicles meant for agricultural purposes. although some of their machines have also found a place in public utilities and industry domains.

It all started with the UMM 4×4 vehicle, a durable machine inspired by the Hotchkiss-JEEP and featuring an all-wheel-drive sourced from Ferguson Diesel. It was so impressive, that even Pope John Paul II took a ride in it.

But it was in the Paris-Dakar rally that this vehicle made a name for itself with all UMM vehicles able to get to the finish line safely.

This is why most specialized divisions – army, police and so on – have invested money in these incredible machines. Nowadays, you won’t find many second-hand UM vehicles to often; but, if you do, you’d be lucky to own one.

French automobile manufacturer Société Anonyme des Automobiles Unic was founded by Georges Richard in 1905. Mostly known as a commercial vehicle manufacturer, the company initially begun life as a bicycle brand, way back in 1893.

The French company was also involved in manufacturing taxis and light vans, at least in the beginning. Starting with the 1920s, trucks capable of handling up to eleven tons of payload were being rolled out the factory gates.

In 1930, Unic introduces a French first: a large diesel engine manufactured in the country, with later products including Mercedes-Benz engines. However, by 1937 a 20.3-liter 6-cylinder engine developed in-house was being used on all trucks.

The Second World War came with some changes, with the firm now focused on the production of military vehicles for the German Wehrmacht. By 1948, Chrysler Europe has acquired Simca and Unic followed in 1958.

Starting with 1960, the Simca Cargo truck was to be marketed as Unic Cargo. In 1966, Fiat takes over the truck sector of Simca, which is why Fiat and OM trucks were to be sold in France by Unic.

In 1975, Unic became part of Iveco. The firm’s logo adorned truck models originally developed by Fiat, OM or Magirus-Deutz until 1987, when Unic disappeared from the scene.

Founded in 1934, with a factory in Perivale and headquartered in Aldwych, London, Universal Power Drives manufactured special-purpose machinery and trucks under the Unipower brand name.

Until the 1950s, Unipower was focused on delivering 4×4 forestry logging trucks. In 1972, the 4×4 Unipower Invader was introduced; it was developed for fire-fighting efforts as well as construction use.

At the 1966 Racing Car Show, the company unveiled the Unipower GT sports car. No one knows for sure, but it seems that 72 units of the GT were produced over the next decade.

However, Alvis plc acquired the company in 1994 which is why all trucks began to be branded as Alvis-Unipower shortly after.

Japanese company UD Trucks Corporation has always been focused on the manufacture of diesel trucks, buses, and various other specifically-designed vehicles. Founded in 1935 by Kenzo Adachi as Nihon Diesel Industries, Ltd in Kawaguchi, Japan, the firm is nowadays headquartered in Ageo, Saitama and it’s a subsidiary of Isuzu since 2021.

UD Trucks are marketed in over 60 countries, some of the main markets being Japan, South Africa, Australia, Asia and the Middle East.

The company’s name would stand out of a crowd back in November 1939, when the firm conducted a test to ensure people of the durability of their LD1 truck, with drivers taking on a 3,000 km (about 1864.11 mi) route across Japan.

The truck handled everything the environment threw at it and returned 13 days later without any mentions of failure. In 1940, the production of the TT6 series trucks began, and in 1942 UD developed the TN93 series trucks which bragged about the largest payload capacity on the Japanese market.

Another Japanese first, this brand also introduced the monocoque-type BR3 series buses, which featured engines at the back. The innovative engineers within the company also managed to reveal Japan’s first RFA series air-suspension buses in 1957.

Over the years, the company continued to design and develop new engines and vehicles. As of 1985, a wide range of light-, medium- and heavy-duty trucks was displaying its logo. There were also plenty of buses and special-purpose vehicles to choose from, as well.

However, Nissan Diesel was purchased by the Volvo Group in 2007, becoming a subsidiary, with no changes to the brand name or operations. By April 2021, Isuzu Motors became the owner of UD Trucks, putting an end to this impressive story.

We felt a bit disappointed about the fact that there weren’t as many companies with their name starting with the letter ‘U’ as we hoped for, but this article was surely not boring. We found out new and interesting things about car brands we never even knew existed.

Obviously, names like UAZ were always on the map – whether we wanted it to be or not – but companies like UD Trucks instantly become worthy of our attention, when we find out just how much they achieved.

There’s a lesson to be learned here: geographical location, the amount of funds or the size of a company’s facility become irrelevant when passionate people and skilled engineers get involved with the research, design and development of unique and interesting automotive projects.

There are plenty of success stories of small automobile manufacturers that made a name for themselves by putting their soul into outrageous designs that took the world by storm.

We just wonder: where will the next best thing come from?