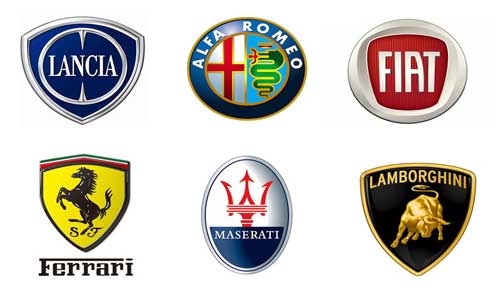 Italian cars have dominated the best sports cars rankings in the world with Ferrari, Lamborghini & Maserati in the Italian car brands list. You can also see the logos and pictures of these all car manufacturing companies from Italy in the post below.

Italy is home to all three giants, as it is to a few more affordable manufacturers, such as Fiat, Alfa Romeo or Lancia, that have been an integral part of the European car heritage for over a century. The Italian automobiles are also popular for providing the best fuel efficient cars in the world as a lot of people look for fuel-efficient cars due to hard economic times.

Most Popular Car Companies from Italy

Fiat is mainly known for the multitude of models it has designed over the years, as well as for maintaining a strong brand personality, in spite of numerous problems. Alongside Ferrari, Maserati and Alfa Romeo, the brand is part of Fiat Group, that has also taken hold of American Chrysler.

Most renowned models include the Punto, the Grande Punto, Panda, Uno or Bravo. Most of them are affordable, small to medium vehicles. Although Fiat has gained public acceptance in Europe, business isn’t equally profitable in the US. Unlike the Asian-made cars, Fiat still has to undergo major changes before achieving considerable notoriety. The rather obsolete models, in conjunction twiththe technical problems that many Fiat owners testified, result in a marketing deficiency that has been lingering for years.

The newer versions of the Fiat 500 model managed to lift up spirits to some extent, as it was really well received when first launched in the US in 2012. The new Fiat 500 meets both style and performance standards, making it one of the most positively reviewed versions of the brand; it is thanks to it that Top Gear reviews praise the virtues of the new Fiat, by naming it “a kind of Latin version of Ford”.

Alfa Romeo’s history is mainly connected to car racing. Models are split between luxury sports versions and Formula One cars.

In spite of its to-die-for looks and the technicalities that make genuine petrolheads wish to own it, the car is known to suffer from definite technical problems. This has caused numerous image problems over the years, which ultimately determined for this Italian sports car brand to only manufacture 5 models at the moment.

Part of the world famous trio of powerful Italian sports cars, Maserati was also born out of one family’s passion for cars. This car brand celebrated one hundred years of activity in 2014 and is definitely going strong for another several decade. All models make an impression with a distinctive combination of design and massive horsepower, but the last one – the Alfieri – is meant to challenge its exact equivalent from German car maker Porsche.

The brand has made the pledge to deliver luxury cars, that can become part of every person’s mission statement:  “What sets it apart from other brands is exclusivity. People recognize the exquisiteness of the Quattroporte, for instance, and its part in a beautiful lifestyle. Maserati is a different expression from every other premium brand.” The success of this brand is partly due to its two-fold acquisition by Fiat, in 1993 and in 2005. Unlike that of other rivals, their story was a successful one, the brand managing to declare profits for the first time in 17 years in 2007.

As it has become an icon, the brand partners with exclusive fashion designers and stores all around the world to advertise the latest watch or clothing collections.

Ferrari is believed to be one of the world’s best sports car. Beautiful, stylish, exquisite, it’s not for nothing that Top Gear names the brand “the most exotic, desirable and simply awesome builder of cutting-edge supercars”, thus also topping the Italian car brands list.

Not only is this impressive vehicle a trademark for luxury cars, it has also made history through its involvement with car racing ever since its beginnings, during the second half of the twentieth century. With a brand owner that has set up the grounds of the company based on his own car racing experience, it’s hard to imagine they don’t know what they’re doing.

Latest one is, of course, “Best Sports Car of the world”.

Lately, the car manufacturer has also set out to deliver one of the world’s most awaited hyper-hybrid car, Ferrari’s “magnum opus”, as Top Gear names it. In spite of the gigantic price, the 499 items the car was manufactured in have already found their possessors.

This more recent Italian car company was set up in the sixties, in order to compete with fellow luxury sports cars Maserati and Ferrari. After having surpassed ownership by Chrysler in the early nineties, the brand entered giant Volkswagen in 1998 and from then on managed to maintain a great reputation.

In 2001, this Italian car manufacturer was proud to announce the appearance of the Murcielago, one of the most renowned luxury sports vehicles of the 21st century. The model production was then quit in favor of the Aventador or the more recent Huracan.

Pagani is a popular Italian manufacturer of carbon fiber and sports cars. The company was established in 1992 and has gained a lot of popularity since then, having introduced its Zonda, Zonda Cinques, and Tricolore series. If you are a fan of ‘Top Gear’, you might even want to check out the episode in which James May tested the famous Zonda Roadster F Clubsport, which is said to be one of the fastest cars in the world.

Another classical representative of the elegant Italian cars style is Lancia. Founded in the beginning of the 20th century by a 25 years-old accountant, this car brand is evocative of the true Italian spirit, with an evident propensity towards beauty and well-traced contours.

The car has been credited with a reputation worse than that of Fiat or Alfa Romeo, which ultimately led Fiat CEO to claim that future plans for this Italian car brand only include the manufacturing of small Ypsilon.

These are some other car makes from Italy you will appreciate.

Abarth is a civilian car and racing car Manufacturer Company founded by Carlo Abarth in 1949. The company is like the “Mini Cooper” of Italy and produces some of the best compact race and road cars. It is owned by Fiat and most of the vehicles manufactured by the company have the ‘Fiat’ logo. Abarth has been AWOL for a while now and produced its last vehicle in 2012, which was the Abarth Punto Supersport.

Gruppo Bertone, simply known as ‘Bertone’, is an automobile company that mainly specializes in car manufacturing, styling, and coachbuilding. The company was founded way back in 1912 and has created some exceptionally beautiful redesigns of popular models of top car companies, such as Alfa Romeo, Maserati, and Lamborghini. Among some of the most popular cars to have ever been created by the company is the Bertone Nuccio.

Founded in 1999, Fornasari is an Italian car company that mainly specializes in manufacturing Buggies, SUVs and sports cars. Although the company hasn’t been able to produce many vehicles, they have been successful in introducing some famous concept and prototypes of vehicles that might be a huge hit in the future. The last car introduced by the company was the Fornasari RR99, which is a four-door SUV that has a horsepower of 610 and top speed of 174 MPH.

Covini Engineering is another popular Italian car manufacturer that mainly specializes in producing sports cars. The company’s most famous creation is the Covini C6W, which is perhaps the only vehicle with a 6-wheel configuration and two-front-axles. Apart from the C6W, the company is also famous for its production of the B24 Turbo-cooler and the T40 which gained a lot of popularity during the early 80s.

The DR Motor Company is a rather unique automobile manufacturer in Italy. The company sells vehicles that boast an Italian design using parts and components supplied from other production companies. The first car sold by the company is known as the ‘DR5’ which gained a lot of popularity in 2009. Now, the company has more than seventy dealers across Italy and a manufacturing plant with a production rate of 100 vehicles per day.

Autobianchi was an Italian automobile manufacturer that was jointly created by Pirelli, Fiat, and Bianchi in 1955. The company was incredibly successful during its early stages and had produced a handful of models. However, due to a few problems, the company was unable to keep up with production and came to an end in 1995 by merging with the popular manufacturer Lancia.

Isotta Fraschini was one of the most popular Italian car manufacturers way back in the 1920s, 30s, and 40s. The company was known for its production of the most prestigious and luxurious cars at the time and even now it is considered a great honor to own one of its vehicles. The company even produced marine engines, aircraft engines, and other items, but after World War II got seriously affected by the economic crisis.

De Tomaso was an Italian car manufacturing company founded way back in 1959. The company initially manufactured various prototypes of race and road cars, but then went on producing its own vehicles in 1970. The company even owned the famous Italian sports carmaker Maserati for quite some time, but then went into liquidation in 2004.

Bianchi is the world’s oldest bicycle manufacturing company in existence. The company went on producing bicycles and motorcycles for quite a long time, until it merged to form the famous automobile manufacturing company Autobianci, which was a joint venture between Perilli and Fiat. Autobianchi was sold in 1969 to Fiat and then came to an end in 1995.

This completes the list of Italian car brands. Let us know if we missed anything in the comments section! Check out the compilation of all auto manufacturers