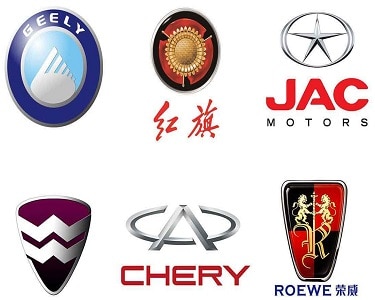 When people think of buying an automobile, Chinese cars are not their first choice. Usually, they go for Italian, German or American makes. At the same time, whenever we try to think of Chinese car brands list, nothing really comes to mind. We tend to associate China with bicycles, when it comes to locomotion, in spite of this country being able to produce everything, from food to industrial mechanisms.

Until 2008, the streets of Beijing were full of bicycles, but within the last few years they were replaced by vehicles. When it comes to Chinese car companies, the luxury segment seems to be the next new phenomenon for the global automakers. The economy of China lead to an impressive growth of the country’s automotive environment. Moreover, China already entered the USA’s market space, a space it had already occupied economically during previous years .

In 2011, 44,3% of the total number of automobiles were produced by local firms, including Geely, Chery, Hafei, Jianghuai, Great Wall and Roewe, and the rest of the vehicles come from global companies such as Volkswagen, General Motors, Hyundai, Nissan, Toyota, Mitsubishi.

These are the top Chinese car makes that are contributing to the auto industry. Who knows they might lead Chinese cars to a breakthrough to be sold worldwide.

Geely (which means lucky in Mandarin) is a Chinese car company known for its passion for innovation. They are now specialized in building products such as automobiles, motorcycles, transmissions and engines, but it started by manufacturing motorcycles in 1994. Their collection is characterized by safety and it gathers various models, as follows: MK, CK, GC7, GC5, GX2, GC2, MK Cross

Geely covers all there is from small, to sedan, compact and even SUV. Which is definite proof that Chinese cars stand a chance of reaching worldwide reach. These models are fresh, dynamic and remind of all actual popular European makes.

Chery is by far the best automobile manufacturer in China. Founded in 1997, the company’s production increased dramatically during the past years, achieving a total number of 500,000 units. This is how it became the sales leader of auto manufacturers from China for 9 years in a row and the biggest passenger vehicles exporter for 8 years in a row. At the moment, the Chinese auto manufacturer exports its products in more than 80 countries in Eastern Europe, South America, Southern Asia, Middle East and Africa.

Hongqi is one remarkable luxury auto manufacturer that started producing vehicles in 1958. Back then, vehicles were used only by high-class people and it was a definitive success until 1981. At the moment, the brand incorporates an executive vehicle that is based on the Toyota Crown, the H7.

In 2011, a press release stated that the company is keen on developing self-driven vehicles that would eventually help avoid mistakes committed in traffic. Not much has been disclosed to the public ever since.

Another top version of HQ3 seems to be reminding of the British Bentley, with a high-class design and top notch performance. It looks like the brand is determined to make a pledge in the area of luxury automobiles. This is probably why it managed to sell 2,534 vehicles in China in 2013, which made it the 67th largest-selling car brand in the country.

Another Chinese automaker worthy of mention is Brilliance Auto. Although of more recent descent than its European or American counterparts, this vehicle manufacturer shows impressive results over the years.

Its origins can be traced back to bus production, but, momentarily, the manufacturer sells various models that compete with European sedans and smaller vehicles: the H320, the H330, the M1 and the FRV. Minibuses and vans are sold under the Jinbei marque.

The alliance with BMW helped the company achieve notable popularity, by selling famous Series 3 and 5 sedans as luxury vehicles. The X1 version of BMW even started to be manufactured in China, thus transforming China into one of the multiple plants BMW owns worldwide.

Alliance with Toyota managed to deliver microvans starting with the nineties, but the collaboration has not managed to be transposed into an effective joint venture, due to regulatory issues.

Last, but not least, BYD Auto completes the list of top Chinese auto manufacturers. The company was founded in 2003 and is 50% owned by Daimler AG.

The brand produces multiple models, among which a compact hatchback (the BYD F3-R), a compact saloon (the BYD L3), an MPV (the BYD M6) and an SUV (BYD S6).

Collaboration with Daimler AG is really fruitful, as this manufacturer closely follows international trends in terms of auto production. Interest in newer technologies will definitely contribute the worldwide development of the brand: the F3DM is a plug-in compact saloon and the BYD e6 is an electric MPV.

The brand is already present on all continents and is proud to announce the manufacturing of electric buses and a new, exquisite electric luxury vehicle, marketed under the Denza brand. Although not very affordable for the time being, it definitely is a promising one.

These are the other active automakers worth mentioning. These may not be as popular as the ones above, but they are making progress, and are an important part of the Chinese auto industry.

SAIC Motor Corporation is a state-owned automobile manufacturer headquartered in Shanghai, China. The company is ranked among the ‘Big Four’ Chinese automakers, namely Dongfeng Motor, FAW, and Chang’an Motors. It is famous for manufacturing some of the most fuel-efficient and luxurious vehicles in China and even has joint ventures with General Motors, Volkswagen, and Volvo.

Dongfeng is also a state-owned Chinese Automobile manufacturer that has its name in the ‘Big Four’ automobile companies in China. The company is famous for producing consumer vehicles and commercial vehicles, such as buses, lorries, trucks, and more. It has joint ventures all around China and even has manufacturing plants in the UK, Paraguay, Vietnam, and the Philippines.

The FAW Group Corporation, short for First Automobile Works is also a state-owned manufacturer in China that mainly specializes in producing auto parts, light and medium buses, and heavy duty trucks. The company even has joint ventures with FAWER, Volkswagen, Toyota, Yangzi, and many more and has numerous divisions in Otey, Hongqi, and Besturn.

The BAIC Group, short for Beijing Automotive Industry Holding Corporation, is a state-owned firm that mainly specializes in producing passenger and commercial vehicles. The company has a long history and is known to be one of the ten most popular automakers in China. It even has joint ventures with Hyundai, Benz, Jeep, and Foton Daimler. As of 2014, the company successfully manufactured more than 2.25 million vehicles, passenger and commercial both, listing it as the fourth largest auto producer in China.

The GAC Group, abbreviated for Guangzhou Automobile Group, is also a state-owned automaker. The company is headquartered in Guangzhou and sells passengers vehicles and commercial vehicles under the Trumpchi and Gonow names. It is famous for introducing some of the most reliable and fuel-efficient SUVs on the market.

Changhe, officially known as ‘Jiangxi Changhe Automobile Corporation’, is an automobile manufacturer engaged in a joint venture with Suzuki. The company mostly redesigns vehicles made by Suzuki and sells them under their own brand name. It even manufactures products that carry the Suzuki brand name. Nevertheless, Changhe is one of the most successful automobile manufacturers in China with an estimated yearly production capacity of around 260,000 vehicles.

Gonow, officially known as “Zhejiang Gonow Automobile Corporation”, as the name implies, is an automobile manufacturer. The company mainly specializes in producing the most reliable, powerful and fuel-efficient SUVs and commercial vehicles and is a subsidiary of the famous GAC group. The company produces more than 200,000 vehicles per year.

Foton Motor, also popularly known as Beiqi Foton Motors, designs and produces agricultural machinery, buses, trucks, and sport utility vehicles. The company is headquartered in Beijing and is a subsidiary of the BAIC Group. As of 2011, Foton motors, is known to have sold a total of 640,000 vehicles, making it one of the most popular manufactures in china.

Zotye Auto, officially known as Zotye International Automobile Trading Corporation, is a company that produces both commercial and passenger vehicles. The company is owned by the Zotye Holding group and plays an important role in exporting automobile components and parts to other countries. Some of the most famous cars manufactured by Zotye are the Z500, V10, T600, T200, Z300, Z200, Z100, JN Auto, M300 and Z200HB.

In the automobile history of China, there have only been a few automobile manufacturers that were unable to prosper. Fuxing Automobile Company, which entered the automobile market in 1994 and for reasons unknown was shut down in 1998. Liming Autos, which was established in 1996, but due to the inability to meet production demands soon shut down in 1999. These are the only two known automakers that are non-active now.

We hope you enjoyed the list and logos of the top Chinese car brands names. Check out more of the automakers list geographically