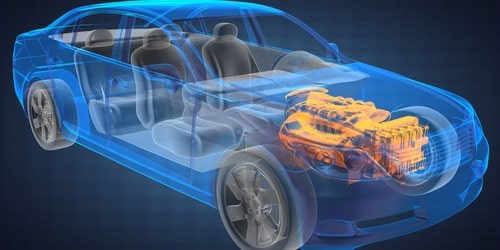 Have you ever just stared at your vehicle and wondered how the heck does it run? Perhaps not, right? Well, it isn’t your fault, nowadays we are so used to the presence of cars and the luxury and comfort it provides that nobody wants to know how they work anymore. Nevertheless, from each nut, bolt to huge automotive parts, the way a car functions is absolutely amazing and beautiful. Are you trying to figure out how a car works?

If so, then here is a complete guide on how the engine, drivetrain, and transmission, all work together to set the whole metal machinery in motion.

The Ultimate Guide On How Cars Work

In this guide, we will cover everything from a car engine to the transmission and drivetrain to give you an idea on how a car functions.

How Does a Car Engine Work?

Well, the principle of any reciprocating internal combustion engine is to put a little high-energy fuel, such as gasoline in a small enclosed space and ignite it. The ignition causes an incredible amount of energy to be produced in the form of an expanding gas, which thus powers your vehicle. Now, your engine uses what is called a ‘four-stroke combustion cycle’ to convert energy into gasoline and then motion.
These four strokes include intake stroke, compression stroke, combustion stroke, and exhaust stroke. Engine components include the crankshaft, rod bearings, connecting rod, pistons, exhaust port, exhaust valve, spark plugs, oil sump, oil pump, engine block, coolant, head, intake port, intake valve, valve cover, and camshaft.

The compression process makes the mixture more powerful and as soon as the piston reaches the top of its stroke, the spark plug emits a tiny spark to ignite the gasoline. The gasoline charge then causes the cylinder to release energy, thus driving the piston down. As soon as the piston hits the bottom, the exhaust valves then open, allowing the heat to be emitted from the tailpipe. The engine keeps repeating this process approximately hundreds of times per minute, thus producing enough energy to get your vehicle into motion.

How the Transmission Works

If you are still finding it difficult to figure out how do cars work, then please note the engine isn’t the only component needed for the operation of a car, as the transmission too plays a crucial role.

Coming back to the subject, it doesn’t matter what type of transmission system is installed in the engine, as each of them have the same function. This function is to transmit the mechanical power produced from the engine to drive wheels. Otherwise, how else would a car move? The transmission of the vehicle also plays an important role in reducing the revolutions of the crankshaft through the use of interlocking gears.

This reduced revolution then allows for the efficient use of the torque produced by the engine and helps maintain an appropriate speed. It does this mainly through the use of various gear combinations. In the first gear, the engine runs relatively faster than the drive wheels. On the other hand, in high gear, the engine is technically just loafing, even though the car may be going at a speed of 80 MPH.

However, this isn’t all. The transmission system, in addition to the various forward gears, also has a neutral position or gear. So, what is the use of this gear? Well, generally the neutral position disconnects the drive wheels from the engine and vice versa, so that the car doesn’t move, no matter how much you pump the gas. Usually, the neutral gear comes in handy at stop lights.

How the Drivetrain Works

The drivetrain of a vehicle is generally comprised of a collection of components that transfer energy received from the engine to the transmission to the drive wheels. These components include the U-Joints, axle shafts, the differential, the CV joints, and the driveshaft. The U-Joint transmits power allowing for varying angles of the driveshaft. The axle shafts deliver power from the final drive of the vehicle to the drive wheels.

The differential is where the power from the engine makes it last stop before being transferred to the wheels. The CV joints assist the drive wheels to bend in any direction while turning and the driveshaft is generally a long tube that connects the wheels to the transmission of your vehicle. However, these components may vary depending on the type of vehicle and transmission system.

Nevertheless, all drivetrains perform the same function and that is to transfer mechanical energy from the transmission and further to the wheels. This transfer involves the physical linking of two main vehicle components, the drive shaft and the differential. These components are connected to the wheels which rotate after receiving energy from the engine and transmission.

While it may seem complicated, there is no doubt that how cars work is truly amazing. Therefore, let’s give a thumbs up to all those car manufacturers out there, who put significant time in creating the most efficient, luxurious and safe vehicles.