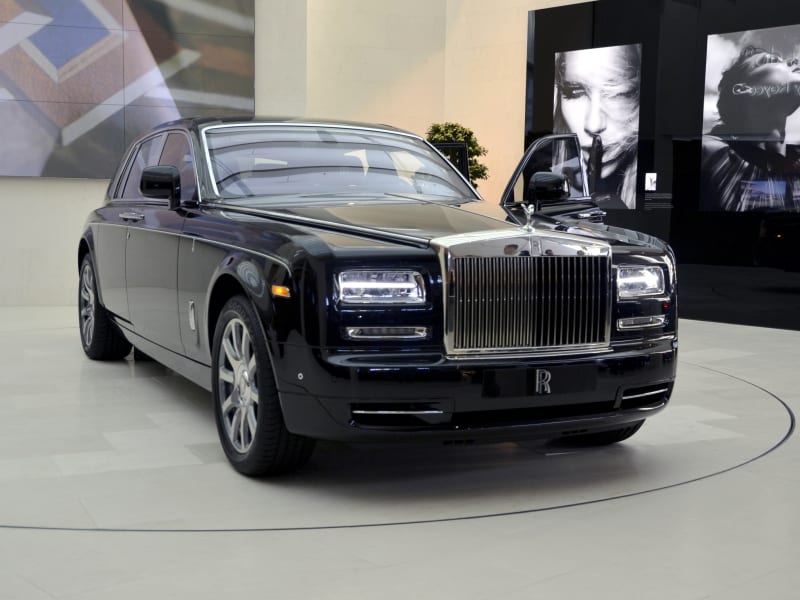 “About as perfect as luxury driving and passengering gets”- Top Gear

A marriage of tradition and modern innovation, the uniquely designed and iconic Rolls Royce Phantom has been often the first choice of CEOs, sheikhs, kings and millionaires all over the world, and this has ensured that the Phantom remains a symbol of luxury and class since it first came out of an English assembly line in 1925. Making its debut in 2003, the New Phantom is expensive, luxurious, large and a truly Rolls Royce car. It was awarded the “car of the year award 2013” by Top Gear and was a commercial success as well. Though the Phantom doesn’t claim out to be one the best cars in the world (although it has long be called the best car in England) but rather one of best luxury money could buy.

Virtually everything in the car was hand-built including the engine, a mighty 6.75 lV-12 engine that outputs 454 of Horsepower, allowing the 6000 pound luxury machine to go up to a max speed of 149 mph. All models apart from the series II comes with a ZF’s 6-speed automatic transmission and a double wishbone suspension needed for better load-handling capabilities and smooth driving. The series 2 comes with an 8- speed automatic transmission which gives it better efficiency. Even at full speeds, the experience remains smooth and controlled. Regardless of the condition of the road, the Phantom will ride with elegance and composure. One should not be fooled by the bulky and non-aerodynamic looks of the car, for it is very well capable of accelerating at a good pace, going from 0 to 60 mph in less than six seconds. The steering is also both light and precise. The Phantom is one car where driving and being seated as passenger are both guaranteed to be an enjoyable experience. Not surprisingly however, given the weight and built of the vehicle, her mileage isn’t very great, being at 11 mpg in the city and 19 mpg on highway.

The design is a unique mix of traditional classic and smooth modern standards. It makes use of aluminum heavily in its construction, giving it a light weight but a robust form. The windshield is made of highly durable and an electrically heated glass. The grille is made of solid stainless steel and the front and side windows trim is all chrome. The paint job is hand done, is amazingly detailed and of high quality. Overall, the exterior simply radiates quality craftsmanship. In fact, it has been observed that the Phantom beautifies the entire parking lot.
The 2009 model features some changes from the 2003 model.

The front has been made to look more similar to Phantom Drop head Coupé and Phantom Coupé, and the doors get a new and improved capping but overall the difference is not very noticeable to an average person. The new phantoms are massive cars, the Phantom saloon’s dimensions stand at 229.9 in (L) by 78.3 in (W) by 64.6 in (H) with a wheel base of 150.4 in. The aluminum alloyed wheels with chrome hub covers are also of proportions at 21″ x 8″ Front and 9.5″ rear.

“The attention to detail in the Phantom is beyond reproach”. – Matt Prior

The interior is a true definition of splendor and magnificence, from the hand-stitched leathers to the flawless designing to the exceptionally comfy seats to the thick carpeting; you are overwhelmed by the same feeling as a young Indian raja was when first riding a howdah! The switch gear is designed with a minimalist approach and the design of the dashboard might look ancient, but behind it lies some of the finest technologies available in auto engineering.

The color screen might be outdated, being the same as the first 2003 model it’s introduced with, which is a let off. The tachometer is absent in the instrument panel. Instead it gets a ‘power reserve dial’. The radio, climate, and navigation controls are located on the leather covered steering wheel. The cabin is spacious with plenty of leg room and the capacity to seat five people comfortably. It is also filled with all the comfort features characteristic of a high-end luxury vehicle. Overall the design of the interior feels vastly different from other cars, adding to the uniqueness of the Phantom. It has a total cargo area of 16.2 ft³.

No two Phantoms are alike. Everything from the leather works to the paint job is done according to the individual customer’s requirements. The amount of customization is unbelievable. For example, a person has a choice of 44,000 colors for the body paint. The rear doors of the car have compartments containing Teflon coated umbrellas so the passenger needs to not worry about forgetting his/her umbrella at home! But we can hardly imagine a person owning a Phantom ever having the need to get out of the car while it’s raining.

Owners now do not have to worry about the car’s iconic symbol “the spirit of ecstasy” ever getting stolen or damaged again as in the New Phantom, it comes with an automatic electronic retraction mechanism allowing it to retract if the need arises. The RR logo on the tires remains upright while driving the car, which is way cooler than having cup holders (the Phantom also comes with heated and cooled cup holders).

The HVAC (heating, ventilating, and air conditioning) and air filtration makes sure the car provides the right thermal comfort and air quality for the passengers and driver. Despite the traditional looks of the car, it would be a folly to assume it lacks all the fancy gadgets found in other expensive cars in the same category. It features:

It doesn’t shy away when it comes to luxury features as well, it includes a 26-speaker premium sound system including a 420w Premium Amplifier and Automatic Equalizer, 8-disc CD changer, 18-way power front seats and 16-way power rear seats, rear-seat tables, a DVD entertainment system, Bluetooth, Weather band, Audio Theft Deterrent, Illuminated Locking Glove Box, wireless headphones, and an air conditioning with 5-zone climate controls. Even a refrigerator and a picnic table, because, why not? And with the company’s bespoke approach to car manufacture, the number of features is only limited to the buyer’s imagination (and money).

Unlike most conventional cars, the Phantom features a non-standard door design. The rear doors are ear-hinged which although makes it more convenient for the passenger, it also raise safety concerns for a number of obvious reasons. At least they were considerate enough to pace an electronic lock to prevent it from opening while the car is moving.

The car will also slow down to a walking pace on its own if the rear door remains open while driving. Keeping the subject of suicide doors aside, the car makes no compromise when it comes to the safety of its passengers for it is an important requirement, given the status of people that travel in it. It comes jammed-packed with air bags in the Driver and Passenger Front and side Airbags, Driver and Passenger Side and knee Airbags, Curtain 1st And 2nd Row Airbags and also Airbag Occupancy Sensors.

“The quality will remain long after the price is forgotten.” – Sir Henry Royce

The primary competition for the Rolls Royce Phantom 2009 comes in the form of Bentley’s Mulsanne and Mercedes’ S class. However, so far the Phantom is enjoying continual success at the expense of its rivals. The Maybach was once trying to contend with the Rolls Royce but failed miserably. Although it is far expensive than other luxury sedans, the car is meant for and appeals to the super rich because for them price is not a factor, experience and status is. And this is something that the Phantom offers like no other. The Rolls Royce Phantoms have been on the road for almost a hundred years and it is most certain that the new Phantom will keep the legacy alive, while keeping other luxury cars on the sideline.