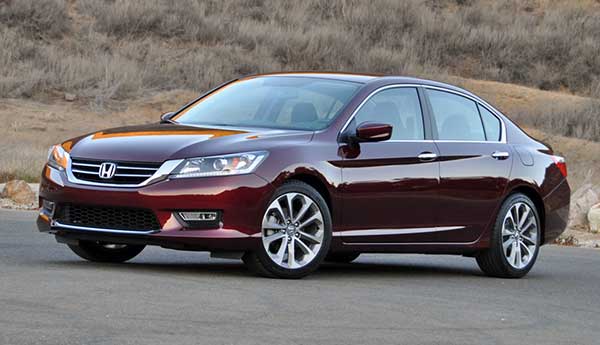 With the increase in traffic accidents, many car shoppers are now finding models that offer maximum safety. And there is no doubt that safety should be the top most concern for most buyers. Research shows that cars that come with exceptional safety features and earn good crash-test ratings from NHTSA and IIHS can offer fives time more protection, as compared to those that meet the medium standards. In simple words, the degree of safety that your car offers makes the difference between life and death.

Are you planning on purchasing the safest car on the road? If so, then here is the top 10 safest cars 2014 list that can help you determine the perfect choice for you.

There is a reason why Honda Accord is a popular choice among car buyers. The vehicle is highly fuel-efficient and is the safest sedan on the road. Its unrivaled practicality, great handling, composed ride, spacious backseat and trunk and reliability all make the Honda Accord the safest and most perfect family vehicle.

Safety features include daytime running lights, anti-lock brakes, electronic stability control, rollover sensor, and 7 air bags. The NHTSA crash-test ratings gave the Honda Accord Sedan 5 stars in overall safety. Additionally, the Accord Sedan gets the top ‘good’ rating from the IIHS, which in this car category is the highest rating.

The 2014 Mazda 3 is a compact car that is budget friendly, available for just $16,945. It has the same looks as the beautiful Mazda 6, but when it comes to safety this little beast proves safer than its big brother. The Mazda 3 comes equipped with a Forward Obstruction Warning System (FOW) that detects obstacles and cars in front via radar, thus warning drivers from afar about potential collisions.

Safety features include side and front air bags, electronic stability control, FOW, rollover sensors, and anti-lock brakes. The 3 earned ‘Good’ results in all categories of collision and ‘advanced’ in frontal crash prevention. Furthermore, this little baby achieves top five star ratings in all crash tests from the NHTSA.

Coming second in the Sedan Category of the safest cars is the 2014 Volvo S60 that is available for just $32,400. Although the vehicle is quite expensive than the Honda Accord Sedan, the extra costs cover up for the safety of the vehicle. Not to mention, the S60 carries forward Volvo’s strong reputation for safety.

Safety features include stability control, traction control, side and front airbags. Other advanced safety features include adaptive cruise control, driver alert control, lane departure warning, cyclist detection, and high beam control. The vehicle has been give top ratings across the IIHS and has also earned five-star ratings in all crash test categories from the NHTSA.

The 2014 Dodge Dart is a compact car that is available for only $16,495. The vehicle is highly fuel efficient giving 28 MPG in the city and 41 on the highway. It is by far the second safest compact car on the road with an exceptionally powerful body, distinctive sport styling, and class-leading safety ratings.

For a compact car, the dart has essential achieved a bulls-eye in all U.S crash test ratings. It has earned five stars in overall safety and all other crash test categories. Furthermore, the 2014 Dodge Dart has earned the Top Safety Pick status from the IIHS and earned ‘good’ in all safety ratings tests.

The 2014 Acura RLX is a luxury vehicle that is available for just $48,450. It is by far the safest vehicle in the luxury category and is popular for its smooth V6 growl, interesting new safety and advanced infotainment features, and exceptional gas mileage. Although the crash test ratings aren’t in yet, but due to the latest safety technologies there is no harm in saying that the Acura RLX has got your back!

These features include collision avoidance system, lane-keeping system, lane-departure system, adaptive cruise control, blind-spot monitors, and 8 air bags. Additionally, the vehicle can even grant a degree of autonomous driving. What more could a person ask for?

Coming second in the luxury vehicle category is the Volvo S80, the big brother of the S60. Similar to the S60, this baby comes with impressive safety features that can warn you about potential collisions from first. Although the vehicle isn’t very impressive on the styling, it has earned the Top Safety Pick from the IIHS and has scored ‘good’ in all tests and even earned ‘superior’ in frontal crash prevention.

The 2014 Acura MDX is a mid-size SUV that is available for just $42,290. It is clearly in the finest form of third generation SUV’s and comes with an exceptionally beautiful design with less edges and more safety than before.

The vehicle comes equipped with a special Collision Mitigation Braking System (CMBS) that warns drivers of potential accidents. Additionally, the vehicle has earned top ratings from NHTSA and even earned the status of Top Safety Pick from IIHS.

Coming second in the mid-size SUV category is the 2014 Mercedes-Benz M Class. The vehicle comes equipped with a Collision Prevention Assist system that activates as soon as you reach 20 mph. The system detects any objects or cars that could be a potential threat and employs Adaptive Brake Assist automatically to prevent collisions.

The Ford F-150 is a large pickup truck that is well popular for its towing technology and toughness. It is by far the safest pickup truck on the road for a reasonable price of just $29,575. The vehicle has earned IIHS’s status of the Top Safety Pick in trucks and has been given five stars in overall safety from the NHTSA.

Coming second in the large pickup truck regarding safety is the 2014 Honda Ridgeline. The vehicle is available for just $29,575 and is incredibly fuel-efficient and popular for its strong body and high towing capacity. The vehicle comes equipped with advanced safety features including adaptive cruise control, stability control, traction control and many more. Additionally, it has earned excellent results in both NTHSA and IIHS crash test safety ratings.

So, now that you are familiar with the safest cars for 2014, choosing the perfect option for you won’t be a problem.