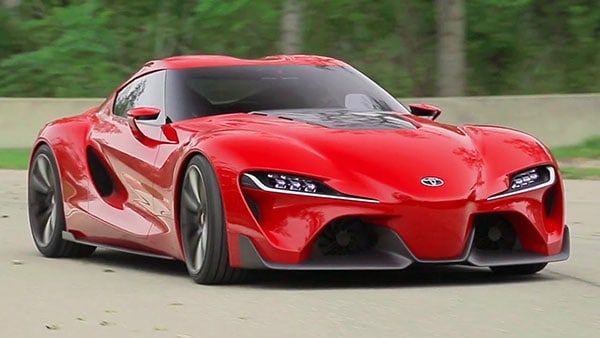 
When it comes to cars, some automakers constantly try to solve different problems. One of them is preventing the Earth from becoming a fiery globe. Another one of their goals is to push their limits. However, some of their ideas become reality through the manufacturing of concept cars, which are launched at showrooms. Whether they reach production phase or not, some concept cars remain the best. And we’ve collected the top 5 best concept cars of the last 5 years.

Are you convinced that all Toyota cars are boring? Let us knock that thought right out of your mind. How? By presenting you the FT1 concept cars, the best one of 2014, at least in our opinion. It is the most radical-looking sports car concept at the 2014 Detroit show. The automaker only revealed the fact that there will be an internal combustion engine under the hood. They did however reveal some other interesting details, like the use of a retractable rear wing on the back of the car. Aerodynamics are also an important factor on the FT 1, and Toyota says that airflow has been optimized around the car while at race track speeds.

Good things occur after playing a video game. Let’s say, a concept car? Is it possible? Yes, if it looks as marvelous as the Citroen GT Concept. Its French automaker and racing simulation developer Polyphony Digital established a partnership in which the GT was designed and created for Gran Turismo 5. This car looks like no other concept car we’ve seen. Its space-age interior looks video-gaming appropriate, as if it’d been pulled from the future. The large car weighs a mere 3,086 pounds with a V8 engine and 646 horsepower. Six versions, $2.1 million each, were planned for production. Those French…

Are you ready for a blisteringly, ridiculously real-world fast concept car? Hold on tight! We are presenting you McLaren P1. Its automaker tried to make “the best driver’s car on road and track”. And we think he succeeded. Here’s some technical details to prove it. Its power-to-weight ratio exceeds 600 bhp per tonne and it uses a carbon tub. P1 has all sorts of tricks to reduce the weight to 1400kg like aluminum panels or lighter wheels.

Unfortunately, P1 was limited to a production run of 500 cars. The concept car features a two-seat layout. Despite this, the P1 is nearly 30cm longer than the F1 (its predecessor) – measuring 459cm from nose to tail – and 13cm wider.

Let’s go back to 2011 in the Geneva showroom. It is here that we discovered a new type of luxury. Infiniti Etherea concept car designed in Japan. But for whom? For younger buyers. Part coupe, part luxury sedan, and part sports sedan, this car employs a potent but highly efficient hybrid powertrain. Let’s detail it. The Etherea is small, about 4 in., it has a highly sculpted shape and silhouette, unlike any others in its class. Under the hood, we find a 2.5-liter 4-cylinder engine and an electric motor. Thanks to the hybrid engine, it cuts CO2 emissions, while not compromising the fun of driving. What more? It is a spacious 4-seater with four wide-opening doors and a flat floor that creates a strong feeling of openness. Ready to hop in?

Do you want to discover more than just a concept car? Porsche 918 Sypder is the answer. At the 2010 Geneva Motor Show, the luxurious hybrid 918 debuted in the form of a concept. The Spyder has a 4.6 liter V8 engine under the hood, capable of reaching 887 horsepower and a lithium-ion battery pack. So, why does the Porsche 918 rank as the best concept car beginning of 2010? Because Porsche planned to manufacture 918 units as a 2014 model. It’s very rare that audacious  concepts like this are approved for production. If you have the chance to drive this car, be careful with the gas pedal because you can easily reach 210 mph.

Hope you liked our list of the top 5 concept cars in the last 5 years. Subscribe to get more interesting news right to your inbox!