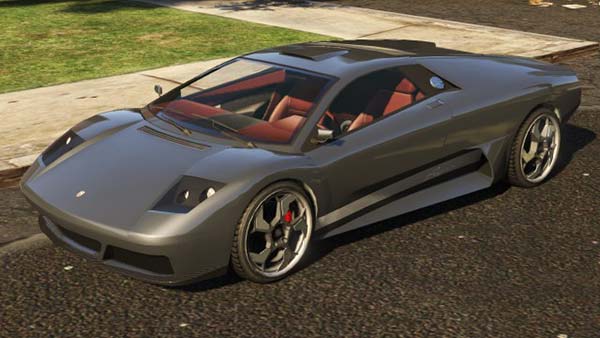 Developed by Rockstar North, (GTA) Grand Theft Auto 5 is an open world, adventure and action video game, which allows users to play with their own character and finish numerous missions and tasks. The game follows the story of three criminals and their efforts to commit heists. But, the story isn’t the only thing interesting about GTA 5. In fact what intrigues most users and game-fanatics to play this game are the classy vehicles and their exceptional graphics! So, if you plan on playing the game anytime soon, don’t forget to drive these best cars in GTA 5:

The 95 cabrio is one of the top cars in GTA 5 that is adored by many users. The vehicle comes into in the ‘Supercars’ or sports car category. The design of the 95 cabrio is inspired by Audi’s R8 Spyder and is dominated by the appearance of the aggressive and tough front face. The vehicle is incredibly stylish and is one of the best and high performing cars in GTA 5 in terms of acceleration and top speed.

The Zentrono is another sports car which is inspired by Lamborghini’s Sesto Elemento. The vehicle has made its first appearance in the GTA series and is distinguisged by its very low, sloped body and aggressive styling cues. The car is truly amazing in terms of acceleration, speed and handling and is well-liked by most game-players. The vehicle comes equipped with a V12 hybrid engine and is one of the fastest cars in GTA 5.

The Elegy RH8 is one of the top cars in GTA 5 that makes its way into the game as a 2-door sports car. The vehicle is inspired by the famous Nissan GT R35 SpecV and is incredibly stylish and luxurious. It borrows a few styling cues from Nissan’s other models as well and looks like a Skyline and GT-R combined into one. The Elegy RH8 features a V6 twin-turbo engine and is also one of the best and high performing cars in GTA 5.

The Blista hits the roads of GTA 5 as a two-door coupe. This isn’t the first time the Blista is making its appearance in the GTA series. In fact the car was well-popular in previous versions of the game as well namely GTA III, Liberty City, and Vice City Stories. The vehicle resembles a third Generation Dodge Caravan, but has a sportier touch. By looking at way things are going, it appears to be that Blista is going to be making its way in the next version of the Grand Theft Auto as well.

The Rhapsody is another two-door coupe that is popular due to its Muscle looks. The rear end and sides of the vehicle resemble an AMC Pacer which was manufactured way back in the 1970’s. And, it also borrows a few styling cues from the good old Volkswagen Golf MK1 with round headlights and a badge in the center of the grille.

For all those GTA fans out there, you probably do know about the famous SENTINEL! It was the most famous car in GTA III and ever since introduced, a high-performance variant has been present in almost every GTA game. Yes, the car has made its appearance in GTA Vice City, Vice City Stories, GTA IV, and in many other games as well. However, this time the Sentinel looks the most impressive of all and seems to be inspired by BMW M5.

The Dominator makes its way into GTA 5, as a muscle vintage car. Anyone upon noticing this vehicle in the name will be able to notice that the vehicle is inspired by the fifth generation Ford Mustang GT. The vehicle has an incredibly tough design and is the most perfect and the best muscle car in GTA 5. It features a high torque V8 engine that gives it fast acceleration and above average top speed allowing the vehicle to catch up with the sports cars.

Ah, of course how can we miss out on the good ol’ stinger? For those people who have actually played GTA right from the beginning, you probably might have heard about the stinger. The vehicle has made its appearance in probably every GTA game ever created and has been the favorite car of most users for a long time now. The stinger borrows design cues from the 1963 Corvette Split-Window and the 1968 Chevrolet Corvette C3 and is indeed one of the best muscle cars in GTA 5.

The Sandking, as the name suggests, is an off-road pickup truck. The vehicle is available in two versions in the game, namely Sandking XL and SWB. The SWB resembles army trucks and is much stronger and the XL looks like one of those luxurious pickup trucks that you can only dream of. The vehicle has made its appearances in Vice City, San Andreas, and Vice City Stories before, but this time the design is just deadly.

It seems like everyone loves the sporty touch that vehicles have in GTA 5. The Exemplar although is a 4-door coupe comes with a sporty design, due to which many users love driving it in the game. The car borrows a mixture of design elements from Italian and British cars. It features a powerful engine and is capable of providing exceptional balance with cornering at low and high speeds. It is often considered the best 4-door racing car coupe in GTA 5.

The Most Popular Car in GTA 5 – Infernus

This is the moment that you have been waiting for. So, what is the best car in GTA 5? Well, the car is none other than….. INFERNUS! Yes, the vehicle that has made its appearance in every popular GTA game. This time the vehicle comes with the most impressive design and features cues from Jaguar XJ220 and XJR-15.

So, now that you are familiar with the best cars in GTA 5, don’t forget to drive them on the open roads of San Andreas. Feel free to share this article with your friends to show em who’s in the game!