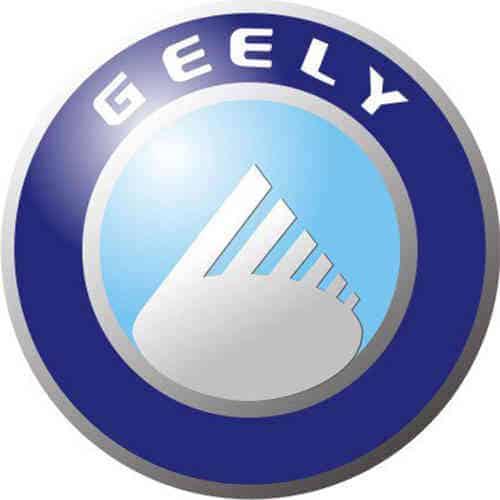 Geely, officially known as ‘Zhejiang Geely Holding Group CO. Ltd’, was established in 1986. The company was founded by Li Shufu as a refrigerator manufacturing unit. It is said that Li Shufu borrowed money from his family in order to start his refrigerator business. Regardless, ever since its inception, the refrigerator business was going exceptionally good. Let’s take a deep dive into learning more about the Geely Logo, history timeline and list of latest models.

Soon enough, the company began making huge profits and then decided to shift its attention to something different. Therefore, in 1994, Li Shufu purchased new machinery for his manufacturing plant and began producing motorcycles. In June of the same year, Geely introduced China’s first ever scooter motor and within a year, sales volumes exceeded 60,000 units.

In 1995, the company gained even more success and total sales volumes reached 200,000 units. A year later, Geely became popular as the main motorcycle manufacturer in China. In 1997, the company was reorganized and entered the higher education industry. It was during this time that Geely established three privately-owned colleges and universities.

That same year, Geely decided to expand its business even more and shifted its attention to the automotive industry. In 1998, the company introduced its first production vehicle, called the ‘Geely HQ’ (picture above), in Linhai City. Therefore, this led to the creation of “Geely Automobile Holdings Ltd”, a subsidiary of the Geely Group and the brand was now listed on the Hong Kong Stock Exchange.

Important Events in the History of Geely

Geely made an amazing start to the new century by introducing its JL6360, MR7130, and MR6370 series. All these automobiles proved successful in the Chinese automotive market and were listed in the SETC automobile products catalog, thus allowing Geely to become the first private company to be considered an automobile manufacturer.

However, in 2002 many claimed that Geely’s products resembled or were either ditto copies of different brands. These claims were true and many Geely cars introduced resembled other brands, especially the exterior design. In order to eliminate all conflicts, the company designed new cars by using new technology, outsourcing design, and reverse engineering tools.

In 2003, all problems had finally been sorted and the company began exporting its first generation models to overseas markets. Most of the cars gained huge success, especially in the Asian and European markets and were a success due to their reliability, fuel efficiency and performance. Following the success of its cars in the Asian and European markets, Geely decided to sell its products in the US.

In 2005, the company in order to pursue this goal presented its all new Geely LC at the Frankfurt Motor Show, followed by another showing at the 2006 Detroit Auto Show. However, exports to the US were postponed, thus the company focused on its sales in the European market.

In 2007, Geely applied for more than 120 intellectual property rights of other vehicles, two-thirds were utility models and one-third of the rights were patents. By mid of 2008, Geely approached the Ford Motor Company in an attempt to acquire the Volvo Brand. In 2010, after numerous meetings and negotiations, the deal was made.

Therefore, Geely was officially named the buyer and the new parent company of the Swedish automobile manufacturer, Volvo. That same year, Geely had total sales exceeding 400,000 units. However, it was less than the reported 600,000 yearly production rate. In 2011, the company announced it would begin manufacturing cars in the UK and by 2012 also began sales in Italy.

In 2013, Geely purchased Manganese Bronze Holdings and created the joint venture Shanghai LTI Automobile Components Co Ltd. In 2014, the company was reported to expand its overall retail outlets to 900 from 200 in 2004. The same year, Geely also announced it will increase its market share in China to almost 5.8%.

Geely started as a refrigerator-maker with money borrowed from Li Shufu’s family, but now exists as one of the most successful companies in China. It is a major manufacturer of automobiles, transmissions, engines and motorcycles. Additionally, it has its own Automotive Technology Center and Research Institute.

As you can see from Geely’s history, the company started off as a refrigerator-maker, but now exists as one of the most successful automobile manufacturers in China. Therefore, it serves as a perfect example and inspiration for any other start-up company wanting to reach new heights.