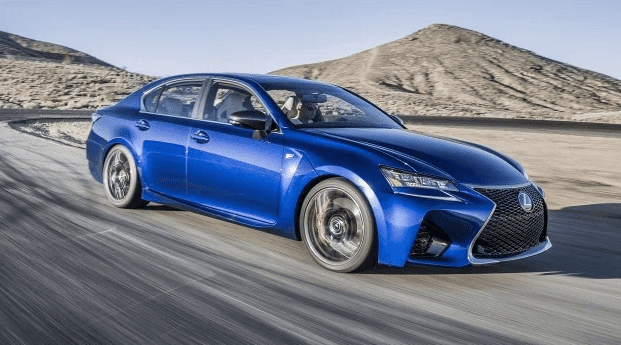 Lexus is ideologically a luxury platform of Toyota. Since the past, Lexus has been coming up with comfortable and pleasurable cars. Among them, we have the Lexus GS – F today. The GS – F is one of the advanced models of franchise Lexus GS. It is advanced in the sense of performance and luxury. As our GS – F is powered by a V8 engine which makes it a power machine.

The Lexus GS – F starts from $85,000. The version is the further division of the Lexus GS franchise Fourth Generation. While this one is the extreme model of the franchise with a V8 engine. Although the cosmetics of GS – F is even slightly different than the rest of the models in the franchise. As per the releases of Lexus, GS – F is one of the powerful sedans they have ever launched.

It may have been observed that all the variants of the Lexus consist a model with the letter “F”. The F is the flagship of the Fuji Speedway which is even the testing site of Lexus. While it is meant for “Fast”. The division Lexus F was introduced first time in 2007 with the legendary Lexus LF – A. Then was the IS – F, RC – F and our model GS – F.

While the GS – F is the second sedan from the Lexus that has the title of F. The first one was the Lexus IS – F. In terms of the franchise, the GS – F does not succeed the IS – F, but related to the F banner, GS – F does succeed it.

The performance division “F” was launched to challenge the performance leader Audi, Porsche, Dodge, and others. With the efforts of the mechanics and engineers of Lexus, they have reached that level. The only thing that matters the most is the price of the F – Division, which is certainly a bit high.

The Lexus GS – F comes with a 5 L V8 engine. Although Lexus has been using such powerful engines before as well. But this has been the first time ever used in a sedan by Lexus. The performance gets more add on with the 8 – speed transmission box which has the sports direct shift.

With such a high performance it is certainly required to have some handling enhancer equipment as well. And Lexus didn’t miss that at all. The Lexus GS – F comes with a Torque vectoring differential. Although the system is not much effective in a number of other vehicles. Although the comparison with and without the system has almost the same result. While the Lexus GS – F showed some effort with the system. The sharp curves and turns didn’t much affect the speed of the car, as the torque was balanced as per the effort put in by the steering wheels. This makes the car to lose less speed and maintain the acceleration. This resulted in fast lap times over the test drive.

The Lexus GS – F has one of the attractive exteriors in the market. The spindle grille between the signature LED Lamps makes it an attraction. The 2017 model gets the Triple Beam LED lamps. Either side of the front bumper have the air vents to provide air to the massive V8 engine to keep it cool.

The rear gets a spoiler which is helpful in maintaining the balance of the ride. It reduces the drag coefficient and the air friction, sliding from the top. This pushes the ride down over high speed for more road grip.

The wheels have the dual trim design, with a 19” dia. Michelin Pilot Super Sport tires are provided as the stock material for the GS – F.

Overall the exterior of the Lexus GS – F gives a supreme look. More like a ride for the CEO or Executive positioned personnel. But not to mention, the exterior more looks like an old fella rather than a sexy babe!

The interior of Lexus GS – F is quite luxurious. The carbon fiber trims have been used in abundance. The cockpit is pretty comfortable for driving. Precisely when it is meant for the speedy performance, the driving alignments are finely aligned. Front and back row seats are comfortable. Leather and carbon fiber have been combined in designing the seats and their stitches. Well, the back row seats are evenly spacious and comfortable. Generally mid – sized sedans offer less space in the back. But our Lexus GS – F has eloquent space for the back seaters.

While when we talk about the competition, the competitors of GS – F wear some good infotainment system. It’s the ideal thought for a performance car, that it should have a responsive system.

Whatever the model you pick from the Lexus GS franchise, the safety specifications are the standard for all. While our GS – F has the Enform Safety Connect, Smart Stop Technology, Vehicle Dynamic Management System and Parking Assistive components as the passive safety modules. When we talk about the handling safeties then the GS – F is equipped with Power Assisted Braking, Electronic power steering and Roadside Assistance features. While the active security panels have 10 air bags Whiplash Injury Lessening feature. It takes the front seats back when, God – Forbid, any accident takes place.

Our Japanese contestant gets the competition from the German Audi S6. The performance schedules of both the vehicles are pretty much relevant but not the similar. The S6 comes with lesser horses, lesser engine specifications, and lesser torque. The cosmetics, drivetrain, performance and handling make them the competitors of each other.

If you are looking for a performance sedan, then Lexus GS – F could be a good choice. Not just the performance, but the seating capacity and the spacious interior makes it a fun to drive car.