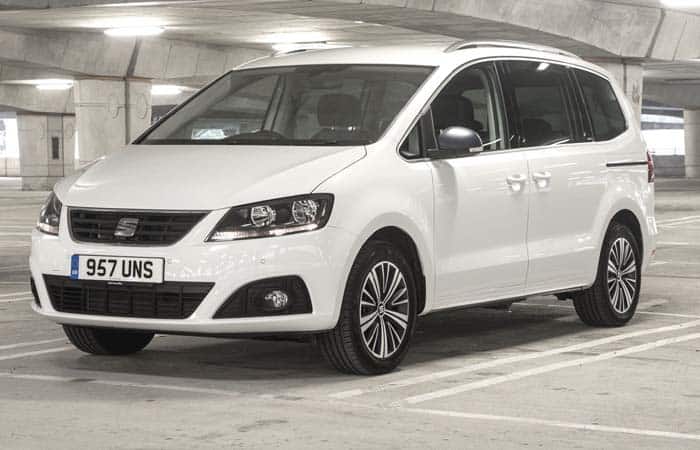 There is just a decent amount of population in the European countries. But they are a lot much concerned about the supercars and the mega cars. Besides the hyper dynasty of the cars, the Europeans even create the family rides with plenty of social, economic and political benefits.

Among the best names, you would meet the SEAT Alhambra. A lot the guys would not be familiar with this automotive brand called a SEAT. Well, it was once a national company for Spain. But after 1986 the Volkswagen took over this entity. Soon after that the company gained some progressive grip and went up the economic column.

In 1996 the Alhambra was introduced under the banner of the SEAT. And this car was mainly launched to tackle the market leaders of that time. Well, after two decades, the rivalry is still there and nothing much has changed.

The time it was introduced the Renault with its Escape, Citroen with the C8 and the Peugeot with the big 807 were the major shareholders. The Renault Escape is still present today. But the rest of the competitors have been disappeared.

Well, the SEAT Alhambra received a pretty good market response. Especially the Spanish market appreciated the design and spacing in this car. It was notably meant for the family rides. And with time it covered a major portion of Europe. By the year 2000, the Alhambra rated amongst the highly grossing vehicles for this company. And this kept Volkswagen to keep on with this car.

The present-day generation was introduced in 2010. And since then it has continuously received some improvements. A standard Alhambra is available for as low as $36,365. And the model range is divided on the basis of drivetrain and cosmetics.

The SEAT Alhambra comes with a pretty domestic kind of drivetrain. Basically, the daily usage has been targeted while creating this car. It has been designed for the family rides and economical robust solutions.

Well, the 1.4 L inline 4-cylinder engine is the starting point. It is a gasoline version available with 150 hp of power at 184 lb-ft of torque. This is the standard model of the SEAT Alhambra. And it is even the lowest fuel mileage version. It gives out almost 45 mpg as the combined fuel mileage.

The next one in is the performance version. It gets the 2.0 L 4-cylinder gasoline engine with 200 hp of power. We drove this model in our test. The performance was fine enough to meet the daily ride requirements. Along with that, the performance is even suitable for the speedy highway drives. The 0-62 mph lap for this car is 9.0 seconds. And the highest speed so far recorded is 133 mph.

The base models come with the front-wheel-drive configuration. While the upper trim levels even get the option for the all-wheel-drive. The 6-speed manual is the standard transmission available for the SEAT Alhambra. In addition to that, an automatic gearbox is also available.

Well, the handling is subtle for the city driving. The steering control is gentle with a decent braking power. And on the highways, the drive is fine but seems to be a bit leggy.

The SEAT Alhambra gets a decent exterior designing. The structure seems a bit hefty. But it houses a pretty massive interior scope. Well, the cosmetics are pretty modern. The base model comes with the 16-inch alloy wheels. The mid-level trims get the 17-inch while the upper scale enjoys the 18-inch wheels. Ahead of that the projector headlamps are available for this car. The second row gets the sliding doors. While the roof gets the rails. Along with that it even gets a sleek spoiler.

The SEAT Alhambra is quite spacious inside. It offers seats for 7 people including the driver. Well, if you bring in just five guys, you would get a decent cargo space. And if you just rely on the front row, there would be a huge cabin for the load. While if you have to go on with 7 guys, then you would have to sacrifice the cargo block.

Well, the interior ingredients include the cloth seats, leather-wrapped steering wheel and gear knobs and the dark tinted rear windows. Further, the upscale version gets the leather seats with some kind of massage function.

The SEAT Alhambra comes with the 6.5-inch touchscreen infotainment system. It is just a multimedia system for the base models. While the upper trim gets the navigation, Android Auto, Apple CarPlay and some other features. Further, the Alhambra features the tiredness recognition alert system. It aware the drivers to take a break if they are driving on a highway or have driven for long. Ahead of that the SEAT Alhambra is capable of recognizing the traffic signs. You would not have to look out of the window to see what that is. Instead, you could see it on your center console screen.

The SEAT Alhambra includes every necessary safety equipment. It comes with 7 airbags, Isofix child safety seats and the stretchable seatbelts. Well, in the active safety column the Alhambra gets electronic stability control, the anti-lock braking system, traction control and the lane keep assist. Further, the parking sensor and the rearview camera is also available for this car.

The Renault Escape is a decade old competitor of the SEAT Alhambra. They both are a similar caliber MPVs. And they even share the same level of market fame. Certainly, these are just an equal competitor for each other.

The drive quality and the interior spacing is quite fine in the SEAT Alhambra. And the updates are fine enough to match the competition.