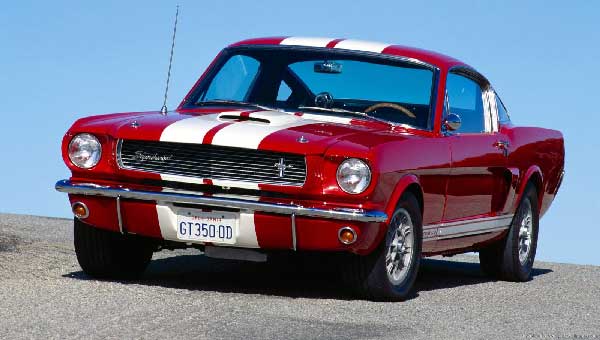 A classic car is a car that never gets old. Or, we could likewise claim, a car that is still in production, even after several decades (and sometimes even a century). Therefore, we will include in the best classic cars category the most well-known vehicles that have made history: The classic Chevrolet Corvette, Volkswagen Beetle, Porsche, the Fiat 500, the old Citroen and, of course Ford Mustang.

The famous Corvette can not pass unseen. It is beautiful, authentic, traditionally American and a genuine classic. If you haven’t seen a Corvette in the movies, you must have seen it on the streets of the US or even at some car auctions (sometimes for classic car parts).

General Motors started manufacturing these cars in 1953. Little did they know the car would become a legend, to be powerfully acclaimed 6 decades later.

This classic car is mostly reminiscent of the American Midwest, and this is why the brand suffers immensely from this image deficit. Younger generations may remember having seen it in cinemas, but they remain reluctant to purchasing it for their personal use. Instead, they look towards competitor brands from the same league: Porsche, BMW and Audi.

Nevertheless, the newest version – the C7 – received intense praise from critics. But hey! We will still love the good old Corvette.

Whoever travels through Europe will definitely sigh at the notice of the impressive number of Beetles parked in front of the older buildings. It looks like Austrians, Italians, Germans and French people altogether have developed a passion for this small, yet funny and sympathetic car that’s been around for ages.

And yes, the Beetle has been around for ages, at least in Europe. First developed before the Second World War, the car has been manufactured in more than 20 million items, out of which the vast majority were purchased by Germans.

This car is emblematic of the whole European heritage for the 20th century. The war, the raising economies (and then the recovery periods), the multiplication of manufacturing plants all over Germany and, of course, the ascent of Volkswagen. It is, after all, the brand with which the now global car giant has started its journey and made the pledge to manufacture strong, enduring cars that also have a soul.

With a history almost as old as that of the Beetle, this Italian car has also managed to capture Europeans’ hearts everywhere. The first model to be released – a two-door coupe with a sunroof – managed to meet expectations both in terms of budget and performance.

The D, the K, the F or the L models have all attracted attention, through their compact design and their cheerful spirit.

Even today, 50 years from the appearance of the first model, driving a Fiat 500 almost makes you feel transposed onto the winding roads of the Mediterranean coast. The car is evocative of the true Italian nature, while at the same time reminding of all things classically Italian: the sunny weather, wine, cheese, olives and, of course, joy.


If the manufacturer of the first mass-produced car can not be considered a classic, than no other car manufacturer can. The American giant has more than 100 years of history and has seen a formidable expansion throughout the world, ever since its beginning.

The Model T, the Mustang, the Lincoln are all definitive of distinct automotive eras, which Ford seems to have successfully initiated (if not simply took part in).

With manufacturing operations worldwide, an ever-growing number of sales and a plethora of models (40) currently in the making (plus 52 discontinued), Ford is definitely here to stay. Affordability, satisfactory performance and design are among the main qualities that will ensure its ongoing success.

The all-time French car is another classic of the 20th century. The small manufacturer from Saint-Ouen boasts on a performance that not many European car companies can assume: it was the first mass-producer of automobiles outside of the US, closely following the leads set by Ford.

Starting out with the Traction, the manufacturer continued to produce small compact models meant to compete with Italian Fiat and German Beetle.

Citroen still has more than 20 models in production, manufactured in several parts of the world. 2013 brought the giant over 2 million cars sold worldwide, which is less than in previous years, but nonetheless considerable.

Another German legend – this time from the luxury car division – Porsche completes our list of classic cars of the century. Dating back to the thirties, the car manufacturer encountered numerous financial problems during the war, but recovered immediately afterwards, to develop a completely innovative car.

The fresh design, unlike what Germans had been used to, attracted acclaim and situated Porsche among the noteworthy cars of the era. Initially designed as a sports car, the 911 model evolved gradually to encounter the needs for both speed and design.

The model is still being manufactured today, under the Carrera name. This can be considered a significant measure of its success.