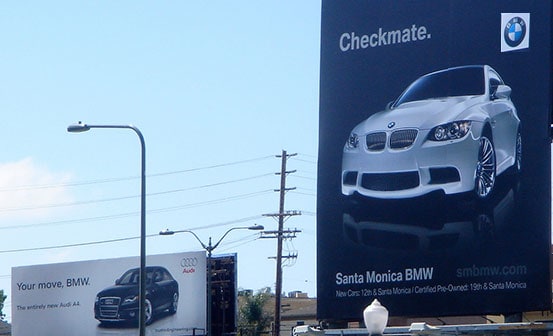 Creative advertising is a tricky business, particularly in the case of car commercials. Describing a new automobile, or an updated version of it would risk to become boring, unless producers think of an innovative way of launching it on the market. Car ads mostly focus on analyzing and emphasizing the design of a vehicle, and that occurs because viewers cannot comprehend its innovative features, unless the latter are delivered using visual elements.

What are the best car commercials of all times?

We have collected a number of ads that we think are the most captivating. Some were broadcasted in the 1960s, while others belong to the more present days, having been released in the 2000s.

The 1960s and Volkswagen

In the 60s, when it became one of the most acclaimed brands in the USA, Volkswagen focused its advertising efforts on the Beetle. Some of the commercials creatively underlined the small size of the vehicle, while others were vivid examples of self-irony.

For instance, a 1964 ad featured a Beetle with an absent headlight and a crushed fender, which indicated to husbands that if their wives came home with their cars looking like that, at least they wouldn’t be sorry. The feeling of a complete lack of regret had to occur because of the price of the Volkswagen Beetle, which was more than acceptable in the 1960s.

Yet another interesting Volkswagen ad from the 60s was the one based on the new Automatic Stick Shift feature of the Beetle. Charlie Chan starred in the video and it was composed as a thrilling short film. In spite of the cool publicity, the model failed to bring back any notable revenue to Volkswagen.

This 2012 commercial for Chevrolet Volt was an obvious reference to the LGBT community (“Mom, Dad, I’m electric.”). The image featured a Volt Hybrid letting its ‘parents’ know it changed its preference from gas to electric energy. Although some public voices stated that the ad was a bit too ‘risque’, Chevrolet clearly hinted towards a particular social category and surely won it over.

The Audi and BMW Billboard War

Audi and BMW have had a long-lasting feud for as long as we can remember. The billboard we’ve featured above is not only a declaration of war, but also an intelligent response to the attacks BMW has been receiving from its competitor for years. But wait, it’s not only Audi that’s taken the fight to another level.

See how BMW has also specialized in using sarcasm as a weapon.

One of the greatest comic strips of our time, Peanuts, was featured for the first time in a series of TV ads produced by Ford. Charles Schulz, the creator and main designer of the cartoon, was inspired by his personal experiences, which he reshaped and turned into the two main characters, Charlie Brown and Lucy. The cartoon also featured the widely popular pet dog called Snoopy, which all the children from the 60s and the 70s fell in love with.

Although the Japanese manufacturer has made a name out of building beautiful safe vehicles, publicity means everything when it comes to sales. The “Hands” commercial, which was launched in 2014, has been declared the best auto ad of the year by various publications and organizations: The Telegraph, AutoWeek and others. The video features a pair of hands that craft several Honda units, that are surprisingly diverse. The ad was a sure way of spreading awareness about the brand, particularly because most people out there have no idea that aside from cars, Honda also manufactures boats, motorcycles, mopeds, home electronics and even prototypes of robots.

This one’s a 2000 South African TV commercial for the Fiat Palio, featuring a driver and a cyclist. We all know it, sometimes cyclists have to hold on to something in order to keep on going. But this driver won’t allow it to happen to his car. As the slogan of Fiat suggests, those who have it, love it. And loving it too much interferes with other people’s lives.

Top Car Commercials Of All Time

These are the most recent best 2015 car commercials of all time. See for yourself in this video.

So this ends our list of best car commercials, most of them are not the most recent ones, but we aimed to cover all creative car ads ever made. Hopefully with the above video, you could see the top recent car ads on TV. We hope you liked it, and don’t forget to share it with your friends.