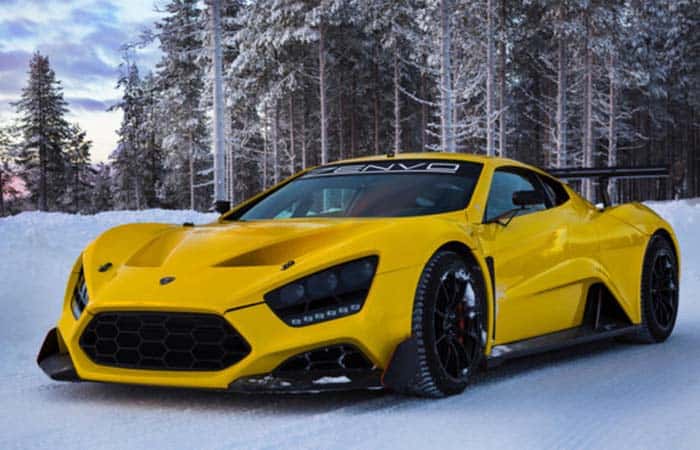 Everything at an auto show looks so good that you wish to grab that all. But the supersonic dudes take most of the attention. Like at a recent show, Bugatti introduced the La Voiture Noire which surely attracted the soccer star Cristiano Ronaldo to spend $1.3 million to buy this car. Well, that happens a lot at the auto shows.

The one we have here today is the Zenvo TS1 GT. It is yet another hyper-car that takes a rank amid the fastest cars in the world. But it is not as fast as most of its competitors. While it looks angrier than its rivals.

Before the TS1 GT, Zenvo used to run the ST1. That was even an angry fella, and it remained in service for 7 good years. But they were filled with a lot of trouble for the company. And the common issue was the fire, as ST1’s cooling system usually failed to cool the car and as a result, it burnt.

Well, the TS1 GT shares most of its structure with its outgone aunt. And let’s hope, it won’t catch fire. Further, the TS1 GT was introduced during the Geneva Motor Show of 2016. It did attract a lot of folks, but none of them made a bold decision to buy one of those on spot.

Ahead of that, the Zenvo is going to produce 15 of these, and the production run would include 5 units every year. While there is no official statement on the price. What is so far attained is $1.2 million.

The TS1 GT gets a 5.8 L twin-supercharged V8 machine, producing 1,104 hp of power at 840 lb-ft of torque. Further, the Zenvo has mounted the engine in the middle of the car, blessing it with a precise center of gravity. Ahead of that, the TS1 GT gets a 7-speed automatic transmission with the paddle shifter. Along with that, the limited-slip differential from Torsen in installed in this car for better handling.

Well, as per Zenvo, the TS1 GT could lap 0-62 mph within 3 seconds. Thanks to the professional, testing team, that lapped the TS1 GT within 2.9 seconds. Certainly, that is faster than its predecessor ST1 that had a bigger engine and a similar power rating. While the top speed as noted by the company is 233 mph (electronically limited).

The suspension gets a double wishbone in front and rear with anti-roll bars and adjustable shocks. Additionally, a hydraulic lift is installed in the front that raises the car height for additional ground clearance.

In a way, the TS1 GT is a lot similar to its predecessor. Though there have been numerous changes made in the performance mechanism. But it just creates a slight difference in the performance. Certainly, the TS1 GT lacks the performance in comparison to the competitors of the ST1, as there is nothing much better in this car. While there is just loud sound of the twin-supercharged V8 that could more likely attract the spectators to look it. But the way it runs is much attractive.

There is very few difference that makes TS1 GT look different than the ST1. Either it is front or the rear, everything is pretty much the same. Well, the front fascia gives an appearance as an angry and with an open mouth and erected antennas. But if the exterior is painted in contrast, the appearance gets a lot better. Well, this is a coupe, composed of the carbon fiber, weighing 3,483 lbs. While the chassis gets steel and aluminum. Ahead of that, the TS1 GT gets a pair of tri-projector beam headlamps, LED DRLs, 19-inch front, and 20-inch rear alloy wheels. Further, the aerodynamic application is kind of perfect, making the car take most of the benefit out of its body.

The Zenvo has not just used the carbon fiber in the exterior, instead, the interior even gets a hand full of carbon fiber. The console and the accent get the carbon fiber in combination with the Alcantara leather. Even the seats get plenty of carbon fiber on them. Further, the TS1 GT offers seating space for 2, while you glove box as the convenient spot in this car. And for the luggage, there is a compartment available in the front.

Inside you will find the Zenvo’s standard infotainment system, with a touchscreen display. Further, the system includes GPS based navigation, Bluetooth telephony, and automatic climate control. Ahead of that, the iPods could be connected to the system, but there is no support available for other Apple products and the Androids. In the entertainment column, you get the FM radio and the Alpine sound system.

The very basic safety ingredients, the airbags, and the adjustable belts are included in this car. While the TS1 GT is shy of other safety features. Besides, the only thing you get is the cruise control. And that is very less favored as a safety feature.

Thanks to Zenvo for adding an anti-theft alarm system to this car!

See Also: Best Upholstery Cleaner: 5 Products You Can Get This Year

The TS1 GT hardly gets a perfect match. If you start looking for a perfect competitor for this car, you may not find it, because either they are powerful then TS1 GT or smarter. While, we got the Pagani Huayra from one of our previous tests, and found that it has 238 mph as its fastest speed. And it can rock 62 mph within 2.8 seconds. But! Huayra only has 720 hp! Ain’t that smart?

The Zenvo’s TS1 GT is surely an incredible hyper-car, but it is not as good as some of the other brands in the market. Well, thumbs-up to Zenvo!