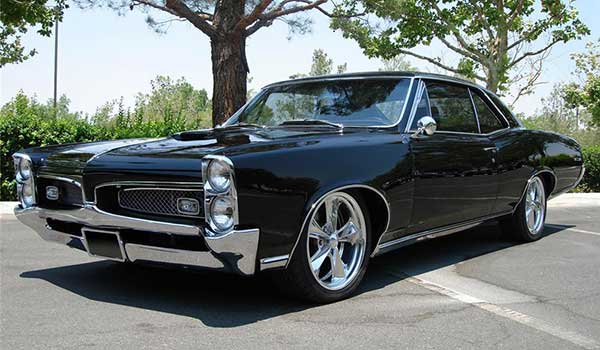 Muscle Cars, by definition, were American cars that appeared in the 50s and that distinguished themselves by a number of features: 2 doors, a V8 engine (most of the times, added by the car owner later on), formidable speed and a considerable degree of coolness. Among the famous exemplars, the 1955 Chrysler 300 C, the Plymouth GTX40, the Plymouth Road Runner or the Holden Monaro GTS 350.

A brief history of this vehicle


The “Goat”, as it was nicknamed back in the days, is considered to be the first genuine muscle car. Thanks to its trademark, the split grill front-end design, the car is easily recognizable.

Built by a special division of General Motors in the early sixties, this vehicle knew immense appreciation during its first 10 years of production, as well as in the beginning of the 21st century. The Pontiac GTO was manufactured between 1964 and 1974, before being restarted by Australian Holden between 2004 and 2006. It was preceded by the Pontiac Tempest and succeeded by the Pontiac G8, both models being less appreciated.

The car was initially intended for racing (hence the considerable speed it managed to attain), which is why its name was actually inspired from the Italian Ferrari GTO (Gran Turismo Omologato). Nonetheless, the chief marketing manager of the GTO, Jim Wangers, decided on the sudden redesign of the Tempest into a “Super Tempest”, of which speed would be the main feature. If the regular Tempest would own a conventional front engine, front transmission and rear-wheel drive configuration, the appended version would take the V8 engine from the classical Pontiac Catalina (389 cu in – 6.4 L).

This way, the car started to appeal to a younger category of clients, for which looks and performance were of considerable impact. Needless to say, all marketing efforts (movie appearances included) were concentrated towards earning this new category’s consideration.

It’s not for nothing that the car was situated among the top muscle cars ever designed. The 1967 model came in three different styles: the hardtop (of which 65 000 models were ever produced), the convertible (approximately 9000 items produced) and the sports coupe (7000).

Design for the new GTO (for all three versions available) was not massively altered, as the focus for improvement went primarily towards performance. If the 1964 model had a 389 engine, the latter was replaced by a 400 one for the GTO 1967. The new V8 6.4 engine owned a carburetor that could produce approximately 335 horsepower and could reach a top speed of 120 mph.

Engine offering was also threefold. The classic 400 came with two extra options: economy and high output. The first one had a two-barrel carburetor, which limited performance to 265 hp. The high output boasted on a 360 hp performance (in comparison to the 335 of the standard one) and on an open-element air cleaner for the engine.

Transmission was manual, 3-speed and ensured the acceleration from 0 to 100 km/h in 7.9 seconds. This was incredible performance for a car of the sixties. Therefore, the car received tremendous reviews: “They’re housebroken Tigers, but they can revert to the jungle whenever you give the word” (Motor Trend, January 1967 Highlights).

It wasn’t only the revolutionary performance that managed to maintain the 1967 GTO among the top muscle vehicles of the era. The modern look, the affordable price (although it was more expensive than the Plymouth) and the impeccable marketing transformed it in an iconic car that is legendary even today, 5 decades after its appearance.

Competition was fierce for the Pontiac, as all other major American car brands were starting to manufacture a model of their own. The Oldsmobile, the Plymouth and the Mustang were among the main competitors, displaying similar performance at even more attractive prices.

A considerable measure of the 1967’s success is the price for which the car is auctioned at the moment: prices vary between $30000 and $50000, which can be quite spicy. But hey, who wouldn’t want their collection to comprise such a cool muscle car?