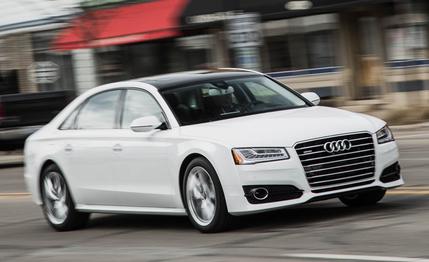 The Audi has been the luxury auto-contender since long.This German automaker has introduced a large range of luxurious cars. Most of these cars have seen a peak in the markets throughout the world. Despite heavy competition laid forth by Audi’s competitors, the company has strived through to come up with amazing cars.

In 1988 Audi launched the Audi V8 which was the first car from this company to use a V8 engine. Audi V8 was a short lived model, which was transformed into a luxury version called A8. That was 1994 when A8 saw the face of the market for the first time.

Since then, A8 has lived through three generation. First being ending in 2002, second continuing till 2009 and the third generation, is presently available. The previous generations of A8 were built using the Volkswagen Group D Platform. The present day version utilizes the MLB platform. This platform is meant to deliver more power and thrust to the car because of its transverse operational techniques.

The model line has various integral and jaw-dropping trims. They include the A8 L (base), A8 hybrid, A8 (L) security and a sports model S8. Besides the standard trims, A8 has also been launched for on choice versions. In 2011 a Long – Term Evolution (LTE) Prototype was launched as a demonstrative model for A8. Soon after that 4G LTE was made available in all the models of A8. During the overall course of production, A8 Exclusive Concept models have even been introduced. Only 50 such cars are produced up till now. The Exclusive Concept model featured the monstrous W12 engine technology.

The Audi A8 bears the price tag of $82,500. Global Cars Brands ranks Audi A8 in one its best-performing cars’ lists.

Audi A8 is one of those cars that have employed aluminum chassis. Well, Audi calls it as the Audi Space Frame. A8 employs a range of gasoline, diesel and hybrid engines. The range comprises of the inline-4 cylinder, V6, V8 and W12 engines.

The category begins from the 2.0 L TFSI hybrid engine. This is the smallest engine available in Audi A8. Interestingly, The engine itself has 208 bhp of power and 258 lb – ft of torque. An additional 53 bhp of power is added to the engine by a 40 kW electric motor. The A8 hybrid thus has a combined power of 242 bhp that gives 354 lb – ft of torque.

Just after the 2.0 L engine, the next engine in the A8 series is the 3.0 L V6 Supercharged. This engine is offered in different tunings. The finest performance of the engine is delivered with 306 bhp of power running at 325 lb – ft of torque.

The next in the range is the 4.0 L TFSI V8 Twin turbo engine. Audi has categorized it as a sporty engine. While the Audi S8 is even equipped with the same engine, but the tuning channels for both the cars differ a lot. A8 with 4.0 L has a power of 429 bhp and torque of 443 lb – ft of torque. These specifications are around 15% lesser than that offered in S8 with the same engine.

All of these engines are laid over the longitudinal platform, mated over 8 – speed Tiptronic automatic transmission. Front – wheel – drive and Quattro are the standard configurations for Audi A8.

Audi A8 has a quite beautiful and elegant structure. It bears the badge for the Executive drives. It’s pretty simple indeed it’s full of elegance. Rather it looks a bit obsolete because most of its family members have been redefined by Audi. But it still bears a shape that was launched at the start of the present generation. Audi Signature LED head and tail lamps and Singleframe® Grille are some major inclusions in the A8 body styling.

Audi A8 has a luxurious interior. Walnut wood garnishing, assorted leather, Valcona Leathering seats along with some other ingredients are the major material of interior designing. Besides the standard interior designing, there are a number of optional interior features available for Audi A8. A panoramic sun and moonroof with power sunshade is available in the car.

Well A8 gets more luxury with the BOSE® Sound System. The car has 14 speakers which results in the production of smooth and clear sounds. Certainly, it’s more scientific to explain it this way.

The Heads – up Display is certainly the drivers’ choice. It displays the speed, navigation and any driver assistive feature enabled.

There is nothing to complain about the safety and security of Audi A8. It has enough number of airbags staged in A8. The active feature of A8 consists of radar sensors. Furthermore, these sensors equip A8 with Audi Pre-Sense®, Side Assist, Adaptive Cruise Control and Parking monitors.

Audi A8 is a royal contender. In conclusion, it’s a complete executive level car. Elegance, harmony, luxury, comfort are all those words that can define this car. It’s an executive in a three – piece suit.