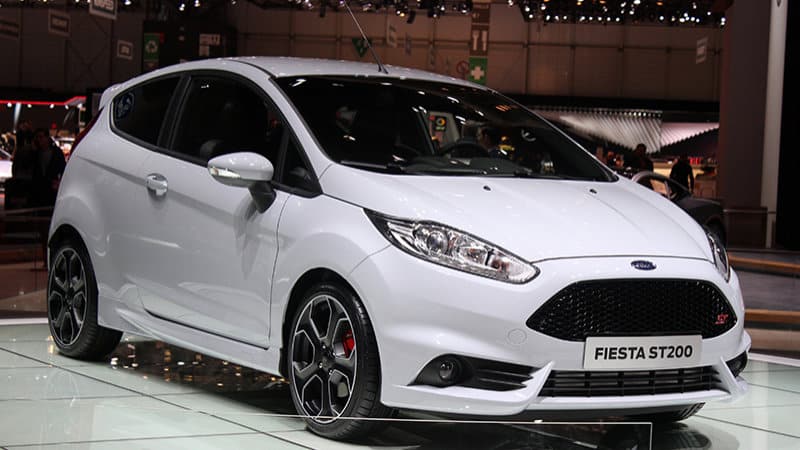 The Ford Fiesta is a global car, which is marketed in almost every country in the world. Since 1976 this car has been in production and since now it has seen seven generations. The present-day generation (7th Generation) has been introduced in the present year.

The 2017 Fiesta gets a mild refreshment in looks and interior. The model line is almost the same as it was prior to this generation. It has Class, Titanium, Zetec and ST models as standard. A new model Fiesta Active has been added to the production line. The sub-models are titled as S, SE, SEL, and SES.

Fiesta ST was introduced in the 6th generation of this car in 2014. ST is the abbreviation of ‘Sports –Tuned’. This had been the high-performance variant of Ford Fiesta before the inclusion of Fiesta Active. The 6th Generation was labeled as Mark-VI, which was launched in 2010. Not to forget, this was the first car from Fiesta Franchise that was marketed in North America. Previously South America, Europe, Far East Asia, South Asia and South Africa were the dominant markets for Ford Fiesta.

Fiesta has been an important means of transportation for the last nine decades. The fame and popularity of Fiesta made Ford establish its assembly lines all over the globe. It is assembled in almost every continent. Additionally, there are many vehicles that appear in the market and many of them go away, nevertheless, some are the food of automobile industries. Similarly, the Ford Fiesta has incorporated new technologies and has remained evergreen in the market.

When the discussion is about the price of a Ford Fiesta, then it is found as one of the cheapest cars. That’s how its demand is increasing day by day. Fiesta is tagged at $13,660 as its MSRP, which is certainly an economical tag for a hatchback dominant car.

Coming to its performance, it is very sustainable in different circumstances. Like in uneven, frictionless surfaces or while taking turns. This is all because of its modest Drivetrain. Fiesta has been designed using the Ford Global – B Platform. The platform has been created for the small family cars, just like the Ford Fiesta. The B Platform is a joint production of Ford and Mazda.

Further, this platform allows different engine types and sizes to be installed in the car. That’s where the Fiesta gets a range of engines. Fiesta is offered with as low as 1.0 L Inline-3 cylinder turbocharged engine. And the performance is elevated with the 1.6 L EcoBoost Inline-4 Cylinder engine.

This platform also allows following through different powertrain system. Thus with the reflexive platform suspension, balancing, shafts, and steering are all synchronized. This increases the handling capability of the car.

Moreover, when it comes to the maintenance charges, they are mainly reduced with the application of this platform.

The car has a rigid body. Mainly it is available in the hatchback body style, but saloon and van body styles are even available. Outer covering is steel – alloy. It is coated with Corrosion – Coat that helps to protect from corrosion and scratches on the exterior.

Moreover, rigid bumpers are fixed in the front end and the rear end of the car. They are very helpful during accidents. Lights on the car along with the indicators have special glowing effects. The side mirrors give an inverted, erect, compressed and exact reflection of rear objects.

It is not a complex car like the luxury and sports sedans. It is an Itsy Bitsy car, but with a number of comfort zones. The Sony Audio System (SAS) and Multicolor Ambient Lighting (MAL) with the color combination of seats makes a wonderful environment.

There is an accommodation of 4 to 5 passengers. The seats have tight-fitting which are very soft with sophisticated seat belts. Glass used in windscreens gives a vivid view of outside world. People sitting in these comfortable seats can easily monitor outside environment.

This car has an Android and Apple Route Destination with Time. It helps in giving the exact destination location with time duration. Also, ‘Intelligent Access Controlling Device (IACD) ‘ is helpful to automatically control brake-pedal, doors and trunk.

Ford MyKey® Facility is available for Fiesta. This allows restricting the performance of the car. So, parents can restrict the performance to a certain limit when their teens are driving.

Along with these, some other features include Dynamic Stability Control (DSC). It is a way of increasing the grip of the car by using a computer technical facility. Also, it helps to stabilize the car over the uneven and frictionless surface. For instance, if some oil, grease or other lubricant is on the surface of the road the breaks automatically and the system aligns the car accordingly.

The Ford Fiesta is evenly cool in terms of security. It is equipped with the keyless entry system. You won’t have to bring out the keys to unlock your Fiesta, the sensors would sense you automatically and open or lock the door. Therefore, it will not be wrong to say that it is a safe car.

Many people who are using Fort Fiesta are very much in favor of it. According to their observation and experience this Super Mini Size Vehicle is affordable and easy to handle’. And this is what makes it one of the best cars for families. In addition, it is easy and simple to use.

Honda Fit is one of the rigorous competitors of Ford Fiesta. Their methodologies of assembly, working system, mini size, style, and designs are very much identical.

Ford Fiesta is economical and this is one of its several strengths. Being a family car it is reliable as well as comfortable. Since its production till now, Fiesta has proved to be a good family car. And we expect the same from it in future. In conclusion, it is definitely a car worth buying.