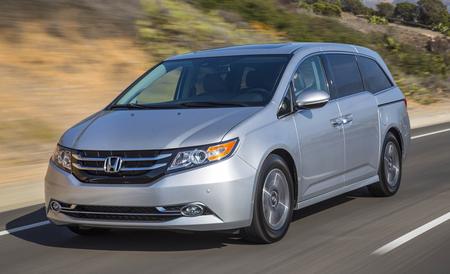 Japanese automobile companies are versatile in producing family cars. Whatever the company you pick, you’ll find amazing small and mid – size cars from it. In the column of the family cars, there is a segment called Minivans. That’s yet another useful vehicle for families.

The Odyssey is a minivan from Honda. As a result of an economic crisis in Japan, the authorities made the automobile companies of the country to produce economical cars. The outcome of the restrictions were the minivans. At that time there wasn’t any update available for those cars as well.

Well in the meantime, Honda launched Odyssey. This was 1994. The car was marketed in the whole world. In Europe Odyssey was marketed as Honda Shuttle and in China as Honda Elysion. The same version was marketed in North America. But there this minivan was unable to earn a good rep for Honda because of its small size.

Internationally Odyssey is offered with a 2.4 L inline 4 – cylinder engine. This configuration has 174 horses @ 166 lb – ft of torque. The car has front – wheel – drive powertrain as standard. While an optional four – wheels – drive powertrain is available with the international Odyssey. This is the Honda’s standard engine configuration. It is the i-VTEC injector engine. This engine technology is certainly a fuel-saving tech.

With the former one, we achieved the mileage EPA of 35 mpg. While the later one gave us 22 mpg. This is because of the V6 machine sitting in the North American Odyssey.

The development of the hybrid technology in Honda resulted in fuel mileage improvement. In 2013 the hybrid tech was introduced in Odyssey. The system resulted in bettering the mileage of the car and reducing the weight. But this version is yet not available in the North American market.

When it comes to steering Odyssey, it is found to be a steady urban candidate. It handling is smooth, sharp and crispy. Ultimately, it is certainly a full fledged family van. The agility of its handling is tested over uneven surfaces. This minivan absorbed almost every shock in the path.

Conventionally the minivans are a stub. Styling and design is not really found in them. But the class from which the Honda Odyssey belongs has contributed towards the design and shape of minivans.

Odyssey has an elegant family shape. From front to back, it gives a sober look. The front grille does not embark the romance of a tiger with aggression roaring from its mouth. Certainly, it depicts the custom of modesty and calmness. The sooth transfers from the grille to the headlights.

Aerodynamics are a part of this minivan. They really don’t contribute heavily in its performance, still, there is some portion present. On the back of the Odyssey, there is a thin spoiler available, which is an active example of aerodynamics.

The road grip of the car is enhanced by its tires. Odyssey has the all – season – tires as a standard for all the models.

In a minivan, you’d rather expect space to be enormous. But Odyssey has something more than that. It allows 7 – 8 passengers (including the driver) to sit in the car comfortably. And on top of that, the interior of the car is comfortable and soft.

Odyssey has 8-inch infotainment system standard in all models. The system features the Pandora® Compatibility, SMS and SiriusXM® Radio. Navigation is only available for the upper trims of the car.

HondaVAC® is a vacuum cleaning feature of Odyssey. It has been installed for instant cleaning of the back row of the car. This feature is only available in SE and Touring Elite model of the car.

Odyssey has attained Five Star Rating in the safety check. Its reliable structure enrolls it in the list of family rides. Well, Odyssey has a number of active safety features. Such as Vehicle Stability Assist™, Tire Pressure Monitoring System, Anti-Lock Braking System and a number of others. In the column of passive safety, Odyssey is amply equipped. It has ample amount of seat safety and airbags available.

Honda Odyssey gets the competition from the Chrysler Pacifica. Both of the cars are similarly priced. But Pacifica has more power and better fuel mileage as compared to Odyssey.

But it doesn’t relegate the rank of Odyssey. She could be an absolute choice for a family, looking for convenience and fun.