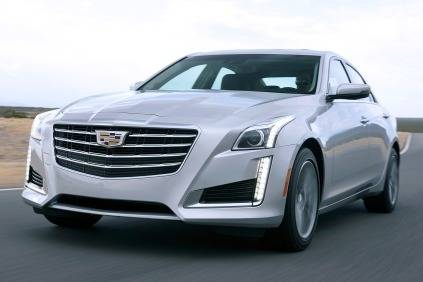 Jumping into the luxury cars for the year 2017, we meet the CTS from the renowned American cars brand, Cadillac. This decent Cadillac starts from $45,560, with an extension of a sports version, CTS – V as well. CTS was first time unveiled in 2002 with a single body style. The subsequent generations have three exterior designs. But the present day generation is offered in a single body style.

The Cadillac CTS is the successor of Cadillac Catera. Catera was generally sold under the label of Opel by General Motors. A trail of the version was even sold by Vauxhall. Both the models were titled as Omega. Catera was assembled in Germany, while CTS has its assemblers in the United States and China.

The body style and the performance of the CTS even reveal that it resembles one of its ancestors, Cadillac STS. Even the market response of both the cars is similar.

The sporty version of the CTS has certainly an immense power. The domestic version doesn’t even lack much of it. Not to forget, the CTS – V has been ranked among the Best Cars for 2016. The initial version of CTS has been remarked for its attractive body style. The vehicle was labeled as Art and Science for marketing.

As far as the performance of the car is concerned, the present day generation is powerful than its predecessors. When it comes to the interior, then the present day CTS is rich in comfort and luxury. Same goes with the exterior of the car.

The third generation CTS was awarded The Car of The Year Award in 2014, by a world famous automobile magazine.

CTS is offered in two engine types. The base engine is the 2.0 L in-line 4 – cylinder turbocharged gasoline engine, while the performance engine is the 3.6 L V6 engine. The V6 engine is also available with twin – turbocharging, but it makes the CTS as CTS – V.

Both the CTS engines are expected to perform eloquently with their massive performing schedules. Indeed they do perform, but there are a few points where CTS’ performance has a catch. While climbing the mountainous roads, the CTS lacks the acceleration, giving a coarse pick. However, when you are climbing hills in a 2.0 L or a 3.6 L naturally aspired V6, you won’t expect such lag in performance.

Besides the transmission, the CTS is a power machine. The base and the performance engines both offer a smooth acceleration and a stable speed. There is nothing to complain about the handling of the car. Instead, after some series of test drives the CTS’ handling was appreciated. Not just the handling, the braking system of the car is quite quick. Such handling and braking systems are perfect when you are driving in city streets.

The Cadillac CTS has a good position among the mid – sized sedans of 2017. Its attractive design and royal looks, makes it rank higher in the list.

The CTS looks more like a royal car, instead of an executive car. The length of the car is evident to its royalty.  It’s more like a classic exterior, rather than a sporty shape. The way the headlamps and the rear lamps are installed, the front grille and the emblem of Cadillac makes it attractive and beautiful.

When it comes to the infotainment system of the car, then there is much to complain about it. The CUE entertainment system is certainly opposite to the performance, interior and exterior of the car. The lag in response and outdated feel makes it reluctant to use.

While comparing the system to the other cars on the road, we found it similar to the infotainment systems of Ford.

However, the CTS is offered with a 12.3” touchscreen in the infotainment system. The all-touch makes it harder to use. The German competitors provide the wheel for ease in usage.

There is nothing to complain about the safety schedules of the Cadillac CTS. Since its first produce, the car has cleared the safety and security tests. The present day CTS (for 2017) has not been tested yet.

CTS carries the standard safety packages, such as the airbags and other equipment. Along with the passive safety, CTS offers the driving assistance tools as well, which makes the driving safer.

In the row of the competitors, we find the Audi A6 as the competitor for the Cadillac CTS. A6 is even offering the similar performance schedules and the price of both the cars is even almost similar. But there are a few things that are differentiable in both the cars. First is the transmission system, which is certainly better with the German. The next is the infotainment system which is responsive in A6, but unfortunately, the CTS lacks it.

The catches in CTS are quite minor. If such catches are ignored, then CTS could be found lying at the top notch among the mid – sized sedans.