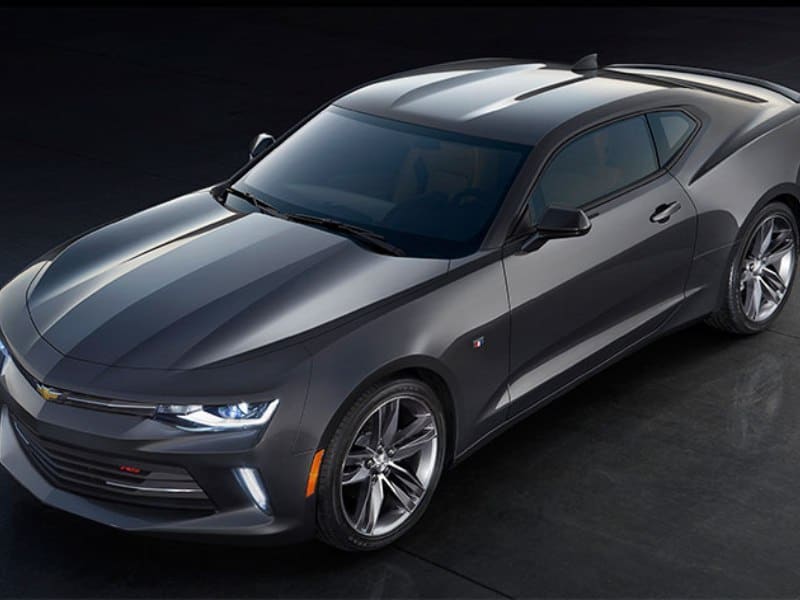 The Camaro is one of Chevy’s most notorious and admired creations ever. The vehicle is classified as a muscle sports car (and some versions also as a pony car). It made its debut in 1966 and was introduced as a competitor to one of the best muscle vehicles to ever hit the roads, the Ford Mustang. Initially, the Camaro shared major of its components and platform with the Pontiac Firebird. However, later the brand developed four distinct generations, after which production of the vehicle ended in 2002.

The nameplate was once again revived in 2009 when Chevy introduced a concept car. This concept car evolved into the fifth-generation Camaro, which received a complete redesign and a new platform for the 2010 model year. Soon enough, the Camaro became one of the most stylish and fastest 2-door coupe cars to enter production. It was because of this reason the fifth-generation variant also made its appearance in the famous sci-fi action movie series produced by Michael Bay, ‘Transformers’.

In 2010, the Camaro even won the World Car Design of the Year award. Two years later, Camaro celebrated its 45th anniversary and it was during this time Chevy began working on redesigning the car for the sixth-generation variant. Till then different model years were introduced with small changes here and there. On May 16, 2015, Chevrolet finally introduced its sixth-generation of the renowned muscle sports car in Detroit at the Belle Isle Park.

According to the designers of the Camaro, over 70% of the architectural components and parts installed in the vehicle are said to be unique. This means the sixth-generation Camaro will not share any similar aspects with other GM products. The brand is reported to begin sales of the Camaro in late 2015, but has released many of its plans and given an early preview for hosts of Camaro fans and media.

Early production models will be available for sale in three variants: a 3.6-liter V6 generating 335 HP, a 6.2-liter V8 generating 455 HP, and a 2.0-liter turbo-charged four-cylinder engine generating 275 HP. The main focus of this review would be on the base 2.0-l engine variant and its performance, exterior, interior, infotainment and safety features.

Nothing can turn heads like a muscle car, and the Camaro is no exception. The vehicle has always been the most stylish in its segment, but this time it also proves to be the most performance worthy. The base model of the 2016 Chevrolet Camaro sports the first turbocharged four-cylinder 2.0-liter engine in the Camaro lineup and delivers exceptional performance, blowing away the minds of many competitors in the sports car segment.

The engine although smaller than its counterparts easily generates 295 pounds of torque and a net horsepower of 275. GM quotes its performance at under 6.0 seconds from 0 to 60 MPH. But, that’s not all; Chevy has also made sure to meet the needs of its fans by introducing two different transmission variants namely: an eight-speed paddle-shifted automatic and a Tremec six-speed manual. However, this doesn’t mean the vehicle compromises on fuel economy.

Chevy estimates fuel efficiency at better than 24 MPG in the city and 30 on the highway. It does so through the new components installed in the vehicle that have reduced the weight of the Camaro by 200 lb (91 kg). This means the new 2016 Chevrolet Camaro will only have a curb weight of 3,611 lbs, which is quite impressive considering it’s a muscle car! Therefore, this just raises the competition bar between Ford and Chevy even more. Regardless of who wins, the Camaro definitely looks thirsty for some Ford Mustang Blood.

There is no doubt in the fact that the previous generation Camaro was an aesthetic success. It outsold the Mustang every year since the fifth generation model made its debut in 2009. Therefore, the brand didn’t want to change the design very much for its sixth-generation model. Of course, the 2016 Camaro does look a little more athletic and leaner, but it still resembles its predecessors and speaks the same visual language.

Regardless, the Camaro has always proved to be a polarizing vehicle and the sixth-generation model doesn’t fail to impress either. The outrageous lines, the edgy appearance, and almost cartoonish character have even allowed the Camaro to continue to find itself a home in the Michael Bay ‘Transformer’ Series. A few cosmetic changes that can be noted in the new model include a new dual-grille, front bumper, fog lights, headlamps, side skirts, rear bumpers, exhausts, and backlights.

The only major change in the 2016 Chevrolet Camaro is that it now proves to be a little smaller than its predecessors. This is a result of the new Alpha architecture being used on the vehicle that have made the Camaro 1.1 inch shorter in height, 2.3 inches shorter overall, and 0.8 inch narrower. Depending on the trim level, track measurements for front and rear have also been reduced by 0.4 to 1.1 inch and the wheelbase is also down by 1.6 inches.

The 2016 Chevrolet Camaro has received the most significant round of changes, yet with regards to the interior design. Much of the interior of the vehicle has been redesigned and even though the Camaro proves to be smaller than its predecessors, it successfully manages to provide exceptional space, comfort and luxury to its passengers and drivers. It can be said that the Camaro strikes a somewhat different chord on the inside.

Part of the reason for this is the installation of new materials and components in the interior. These include a new cockpit-like layout with a central gauge-cluster information center, new leather seats, chrome strips, and adjustable seats. A new flat-bottom steering wheel has also been added with a new speedometer with two rings around to track vehicle performance. Inductive phone charging has also been made available with the 2016 Chevrolet Camaro and the interior is available in five color mixtures.

In addition to color combinations, Chevrolet has even provided the option of customizable interior lighting with 24 different colors. All in all, the interior of the new Camaro is perfect in all aspects and will definitely appeal to a larger market rather than just car-enthusiasts. Add that to the convertible versions that will be released in late 2015 and Chevrolet might just prove to be a bigger hit than the latest Ford Mustang.

The 2016 Chevrolet Camaro comes well equipped both in terms of infotainment features and racing gear. Although the Mustang does still offer a slightly longer list of options, Chevy made sure to equip the budget-friendly Camaro with all imperative features. These include a USB port, satellite radio, iPod Connectivity, Bluetooth Connectivity, Keyless entry, power windows, locks, and mirrors, rearview cameras, and ambient lighting.

Rear seats are adjustable and can be moved lower into the cabin to provide additional space to carry luggage. Atop the dash there is also an 8.0 inch Touchscreen made available on all Camaro variants and models, with a second same-size screen as an option. All in all, for a reasonable price of $24,700, the Camaro offers quite a lot of features to our liking.

Outward visibility has always been a liability and a risk in the Camaro, but Chevy has made sure that with its sixth-generation model it doesn’t make the same mistake again. Therefore, the brand has now made available a rearview camera as standard safety equipment. Apart from the rearview camera, the Camaro comes with a long list of safety features.

These include six standard airbags, stability control, traction control, anti-lock brakes, and Chevy’s latest OnStar telematics system with six months of free emergency services. This new OnStar system proves incredibly useful in instances of a crash or accident and can automatically detect your location and the severity of the incident to immediately send help and medical assistance.

Safety ratings haven’t yet been released and will probably be made available when the vehicle goes into production in late 2015. However, judging from the safety technologies and previous ratings from NHTSA, there is no doubt that the 2016 Chevrolet Camaro is incredibly safe.

All in all, the 2016 Chevrolet Camaro proves to be a complete package vehicle that offers great dependability, reliability, durability and performance, all while maintaining a stylish and handsome appearance. Therefore, it has generated quite a competition in the sports car segment. Some of the top competitors of the Camaro include the 2015 Nissan 370z, 2015 Hyundai Genesis Coupe, 2015 Ford Mustang, and 2015 Dodge Challenger.