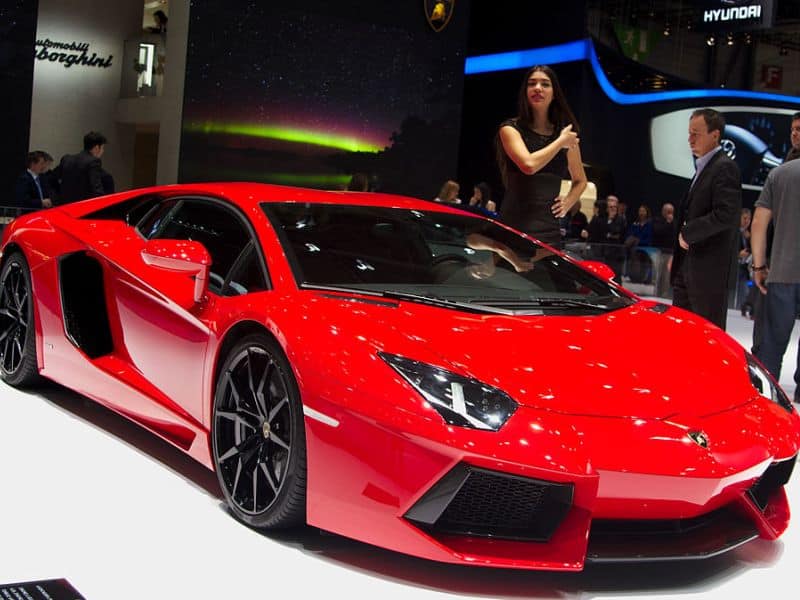 The legendary and iconic supercar, the Lamborghini Aventador is the new flagship vehicle of the Italian car manufacturer Automobili Lamborghini. It is also the replacement for the older Murciélago and improves on its predecessor by being lighter , faster, and more durable, having made its debut at on 28 February 2011 at the  Geneva Motor Show. Like so many Lamborghini models before it, it is named after a Spanish fighting bull, which was exceptionally fearless in the bullring.

The car has been critically acclaimed, having won “Supercar of the Year 2011″ from Top Gear and being described as the “the friendliest V-12 supercar in the world” by the motor trend. Its aggressive design, remarkable engine response, and smooth power output have been deeply praised by drivers and reviewers alike. Having a starting price of $397,500 and with the company had planned to limit the production of the vehicle to only 4000 units, the Italian bull is not only an expensive car but an exclusive one as well. The car comes in two standard versions, the LP 700-4 and the LP 700-4 Roadster, and six special editions but for the sake of simplicity, we will only be covering the standard version in this review.

The Aventador holds the monstrous 6.5 liters 60° V12 engine. The mighty engine is mated to a single-clutch seven-speed semi-automatic transmission and all-wheel drive system. The engine, handcrafted at the company’s headquarters in Santagata Bolognese is capable of producing a max power of 690 BHP and max torque of 508 lb-ft @ 5,500 rpm, making the Aventador a very powerful yet beautiful beast of a car. The car has an excellent weight to power ratio of 426 bhp/ton and the engine provides enough juice to make the car go to an extraordinary top speed of 230 mph and accelerate 0 -60 MPH in an astonishing 2.9 s.

With the fuel economy of just 17.66mpg, this not a car an environmentalist would ever recommend but on the bright side, it is an improvement to the Murciélago at 13.7mpg. The gearbox is light and compact and although the transmission is single clutched, it can easily shift its gear in less than 0.50 milliseconds. But even then, it cannot be said to be on the same level as the Mighty v12 with which it shares the powertrain. The electronically operated all-wheel-drive system, made by the Swedish company Haldex Traction, ensures improved traction and remarkable handling capabilities.

The hydraulic steering is remarkably nice and it gets better the faster the car goes on the road. To stop this unholy bull quickly, a Dual hydraulic circuit brake system with vacuum brake booster is used, having six-piston calipers at the front and four-piston calipers at the rear for maximum retardation. Its massive cooling vents located on the side of the car ensure that the engine never overheats.

A particular drawback in this otherwise extraordinary vehicle is that it under-steers when going through a slow corner, feeling somewhat non-adjustable. In addition, the car has been known to be strangely bothersome to park, with the driver only managing it without much hassle on sports mode manual. Overall the car feels more like it was designed for the track rather than for the road.

Designed by the Italian designer Filippo Perini, the design is heavily influenced by the United States stealth jet fighters such as the F-117A Nighthawk and the F-22 Raptor and is perhaps just as aerodynamic. The body is made with carbon fiber and aluminum alloys with the frame being comprised of high-quality Carbon fiber monocoque with Aluminum for the front and rear, making it both light as well as robust at the same time. The rear spoiler is movable, with the position influenced by the speed and drive mode of the car.

It features the same iconic aspects of the Lamborghini that we all love such as the scissor doors. The angler design features while still managing to look unique in its own right. The handles, trims, front and rear bumpers are painted the same color as the body which gives it a more uniform finish.

The roadster version has a removable roof consisting of 2 carbon fiber panels and can be easily removed and stored in the front luggage area. The Roadster has its own special engine cover design and has an option to attach a wind deflector to improve airflow at high speed in the cabin.

The interior just radiates luxury, despite being jammed packed with all the latest technologies. The looks and feel give the same vibe as that any older models of Lamborghini can give. Once inside, the first thing that catches your eye apart from the limitation in space is the TFT Instrument that looks as if it was once part of a jet fighter before being installed into the car. It shouldn’t come at a surprise that the car has some Audi influence here and there such as the central navigation display which looks like it was savagely taken out from an unlucky Audi A4 and fitted into this car.

But this does tarnish the look of the interior a bit but is also means that the cabin is easier for the driver to get used to. The low profile nature of the interior can be a little troublesome for tall drivers who particularly would need to be a little bit cautious when getting inside the car. Be careful not to bump their head with the edge of the door. When it comes to storage space, it is only so spacious that one can place a few bags of chips in the hobbit-sized club box and storage box between the seats.

To write all the features this car has in details would require an article of its own, as there is not enough space for that in this one. Similar to its predecessor, the Huracán, the Aventador features three drive settings:

-The standard drive mode STRADA, best on-road driving
-The active and aggressive SPORT
-and the thrilling CORSA for track only purposes

And similar to what all Lamborghinis have in common, its engine makes the same sinister howl that they are so famous for, with the wail getting more intense with the increasing speed. It features the 4th generation Haldex Traction system which ensures that the grip and maneuverability is maintained regardless of the conditions. The Brake lights are LED, providing a higher contrast in dark conditions. Headlamps are able to project and automatically adjust the level of the beams. Its integrated key transmitter provides remote keyless entry into the car. The floor is fully carpeted. It only has one LDC monitor located in the front and four speakers for better surround sound.

As it stands, the Car is only as safe as a 1.5 ton, 690 hp supercar can be expected to be. It features an Electronic Stability Control, a computerized system that ensures that improves the vehicle’s overall stability and has a secondary function called the traction control system which prevents loss of traction on roads. The fully automated headlamps adapt to conditions in order to provide illumination for the driver. Other safety features include Side Impact Beams, Dual Stage Driver and Passenger front and Seat-Mounted Side Airbags as well as airbags for their knees and head and Tire Pressure Warning.

Despite the performance and fame of the Aventador, it still needs to contend with incredibly tough competition in the market in the likes of Mercedes-Benz SLS, McLaren 12C, and Ferrari F12 Berlinetta. Being priced at $229,005, $ 229,000, and $ 323,745 respectively, they were far cheaper and more competitively priced than the Aventador. Even the far more expensive Laferrari and the pugani Huayra can cause its super-rich customer base to plunge as these cars offer appeal and better performance. Overall at a glance, the future might not look good for the Aventador but its unique style and experience along with an expanding elite class in the Asian markets could well ensure that all 4000 units are sold within the next decade.

On the other hand, you may also check out our 2017 review for the Lamborghini Centenario.