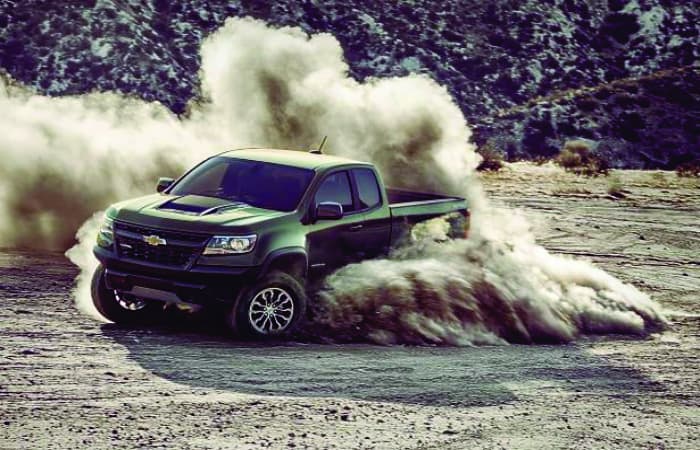 There was a time when pickup trucks were the ultimate off-road machines. But later, they became the errand runners. The pickup trucks had the off-road instincts. They traveled in mud, water, on mountains and the country sides. But now, their tires worn-out if you take them over such a trip.

Though they still are capable of pulling some massive weight. But that is limited to the extent of the cities. Well, these pity innocent beasts have either the four cylinders lying in a line. Or sometimes they are blessed with a mega V6 monster. But the drivetrain and the design makes it hard to believe that such a vehicle could climb a mountain.

Ever since Chevrolet introduced this Colorado, they have been suppressing the soul of adventure. But recently they have analyzed that we Americans are missing the adventurous Chevy. And here we are with the Colorado ZR2; precisely a silent monster.

Way back in 2014, Chevrolet introduced ZR2 at the Los Angeles Auto Show. The response was quite spectacular. Ultimately Chevy displayed the production version of the Colorado ZR2 in 2016.

During the summer of 2016, the Colorado ZR2 went into the production line. And it was announced that the cab would be launched as the model for the year 2017. Finally, we have received this brand new monster, ready to rock and roll.

The standard Colorado comes with an inline-4 engine. It is quite powerful. But it lacks the off-road abilities. Well, to fulfill that need, Chevrolet revamped the mechanics of the Colorado.

Well ZR2 has two drivetrains. One is available in the gasoline engine while the other is for those who prefer diesel engines. The 3.6 L V6 engine is the standard drivetrain. It has 308 hp of power @ 275 lb – ft of torque. Well, this is the most powerful powertrain of the Colorado series. And even, it is the fastest as well. ZR2 with the V6 makes the 0 – 62 mph run in 6.5 seconds. And the top speed for Colorado has increased from 98 mph to 100 mph. Well, we have not experienced anything beyond that.

Well, the 2.8 L inline-4 Duramax turbo-diesel engine is the next powertrain. This is a fuel saving machine. Along with that, it has a subtle amount of power. Well, the Duramax has 186 hp of power with 369 lb – ft of torque. On top of that, it delivers a combined mileage of 20 mpg. Which is indeed a better mileage in an off-road vehicle.

The Colorado ZR2 is available only with the 4 x 4 configuration. And if you jump to the 2 x 4, then you are certainly jumping away from the ZR2. Well, Chevrolet had to make the ZR2 as the off-road contender. And it was certainly impossible without an off-road handling. The ZR2 gets the DSSV Multimatic shocks. It gives you enough bounce to not to jump away from the mountain. The Colorado ZR2 steers quickly. It is quite agile on the city roads. And when it is about the waters and mountains, the ZR2 takes every turn comfortably.

The Chevrolet Colorado received a bold reception for its exterior design. It bears a spectacular monstrous as well as sexy design. But it was not enough for an off-road contender. Ultimately Chevy responded to the exterior design. And brought in the Colorado Z71. But that was not a total countryside design.

While designing the ZR2, Chevy used the concept of the Z71. But gave it a more aggressive look to bear an off-road stance. The hood, wheels and the cab have been improved. The ZR2 features a carbon fiber hood on its bonnet. Further, it employs the giant 17-inch alloy wheels. In addition to that, it even features two cab designs. First is the short box crew cab which is 61.7 inches long. While the next is the long box crew cab which is 74 inches long. Actually, the long box crew cab measures the same as the extended cab. But it features four doors, rather than two doors.

Now is the turn of the interior of Chevrolet Colorado ZR2. Well, we do not find it different from the standard Colorado. Just a few amenities have been added to the interior of ZR2. Those amenities include the sporty seats, fine stitching and increased comfort.

The Colorado ZR2 features the 8-inch touchscreen infotainment system. Well, you would not get lost while driving in a desert or a canyon. As the Chevy’s MyLink supports navigation, 4-G LTE, Apple CarPlay and Android Auto.

Along with that it even features Wi-Fi, wireless phone charging, and four USB ports. The system is fine. And during our test ride, the navigation responded pretty promptly. We do not have any complaint with that.

Chevrolet has taken care of the ZR2’s safety. It has almost every passive safety equipment installed in it. It has the latches, ample amount of airbags and effective belts. Even it has impact reducers installed in the body.

While the active safety is fine enough on this truck. It has cruise control, parking sensors, hill drive assistance, braking assistance and some other features.

There are too many competitors of the Colorado ZR2. But the fact is that the V6 ZR2 does not offer much power to compete with the highly ranked trucks like the Ford F-150 Raptor. Ultimately, the mid-level trucks stand beside the Colorado ZR2. Just like the Honda Ridgeline, which even ranks better than the ZR2. And that is mainly because ZR2 with the V6 has a reasonable performance, but not an outclass performance.

Well, Colorado ZR2 has a lot of adventure. It is fun to drive, the diesel delivers wonderful power and it has ample space in it. But if you are looking for a price match performance, that you would definitely pick something else.