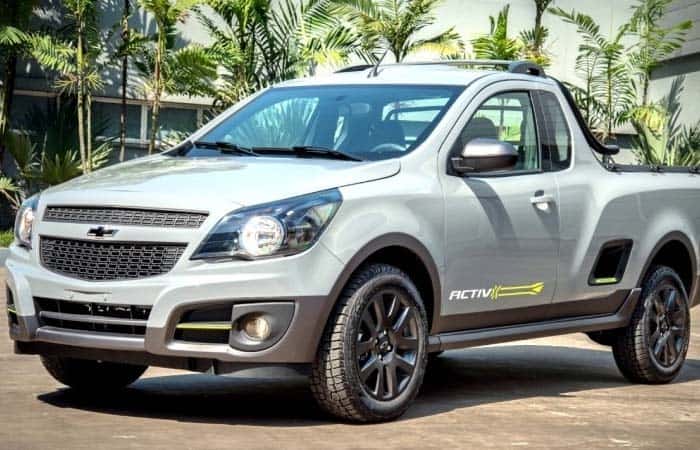 How would a car like SUV seem like? First, you would accept that the owner has got a sedan cut out and fixed it with a chassis. And then you would feel that, no it was not a sedan, it was actually a hatchback with a trailer.

Well, this commonly happens when you see the Opel Corsa based Chevrolet Montana. By the way, Montana is a purpose-built vehicle designed for the commercial markets. Do not get confused with the Pontiac’s Minivan called Montana.

The Chevrolet Montana was introduced in 2003. The design was set up to fit in the day to day requirement of the businesses. Especially the ones concerned with the minor logistic operations and the self-deliverance services. Well, from the front it looked completely like the Opel Corsa. That was only the rear that differentiated the Corsa from Montana. And Chevrolet did not bother changing the design until the second generation.

It could be because the folks liked the performance of this truck. And they would have suggested Chevrolet to not to change the mechanism. On the other side, it could be like the Chevrolet did not bother bringing in a technological change.

Well, whatever it would be, Montana is still surviving. Yeah one more thing, that you would not find Montana in Mexico. Because there this truck is known as Tornado. Further, the starting price for Montana is $15,150.

The Chevrolet Montana comes with a pretty flexible kind of drivetrain. She is available both with the gasoline and diesel configuration. Well, this is a front-wheel-drive vehicle that can manage up to a certain limit of weight.

The 1.4 L inline 4-cylinder gasoline engine comes as the beginner version for the Chevrolet Montana. This is a 105 hp engine with 94 lb-ft of torque. Well, you cannot really expect much from this machine. But in a way, this is a powerful drivetrain.

The 1.8 L inline 4-cylinder gasoline engine is mainly the starting base version engine for the Brazilian market. This is the hustler which is actually the power machine that the businesses could use for loading and logistics. This drivetrain gets 108 hp of power with 124 lb-ft of torque. The underrated power lets save more fuel and require low maintenance. And this is what gets most of the benefit.

The diesel beginner version is available with the 1.3 L inline 4-cylinder engine. This is the low fuel engine that requires lesser maintenance cost. Well, this engine is rated at 74 hp of power with 73 lb-ft of torque.

The giant diesel gets the 1.7 L inline 4-cylinder engine with 125 hp of power at 207 lb-ft of torque. This powertrain is capable of giving 30 mpg as the combined fuel mileage. And this is certainly the choice of a lot of business owners.

Away from the performance, the handling specs are fine enough to roam in a city. There is nothing special included to enhance the handling. It is just rolling with the basic mechanism.

The Chevrolet Montana looks much like a hatchback with a cab. The present-day looks are a lot better than what it was before. But still, the decency is not gone anywhere. Well, the big grille, bigger halogen lamps, fog light and the 16-inch aluminum wheels are some major ingredients of the exterior.

Further, the rear cab is capable of holding around 1550 lbs of weight. But that is mainly dependent on the power rating of Montana.

The Chevrolet Montana houses some basic kind of interior. The cloth seats, black carbon trim, and manual climate control are the interior ingredients. Well, luxury is not something you can find in this car. But all you can get is the convenience. The seating is only available for 2 people including the driver. But if you wish to stuff in the third one that would even do. While you can get the rest of the fleet in the rear.

The Chevrolet Montana is available with different feature standards. Basically, they are differentiated on the basis of the territory. Like the South American version comes with the TFT cluster display and a digital tachometer. While the other versions get the analog dials. Besides Montana comes with an audio system applicable to the radio transmission. Other than that, there is no infotainment system included in the car.

The Chevrolet Montana features some basic safety ingredients. It comes with the dual frontal airbags and reflexive seatbelts. Further, it includes the ABS as the driving aid. Beyond this line, there is nothing more, that you can find in this car. You will have to drive carefully so that you and the others may remain safe.

The Chevrolet Montana gets the competition from its origin land. It is the Volkswagen Saveiro. It is yet another two-door utility vehicle. And it has some decent power rating with a fine design. While Saveiro is also a cutaway hatchback.

The Chevrolet Montana is good enough for the business owners that prefer delivering the items on their own. While putting this vehicle into the family column might not fit into its characteristics.