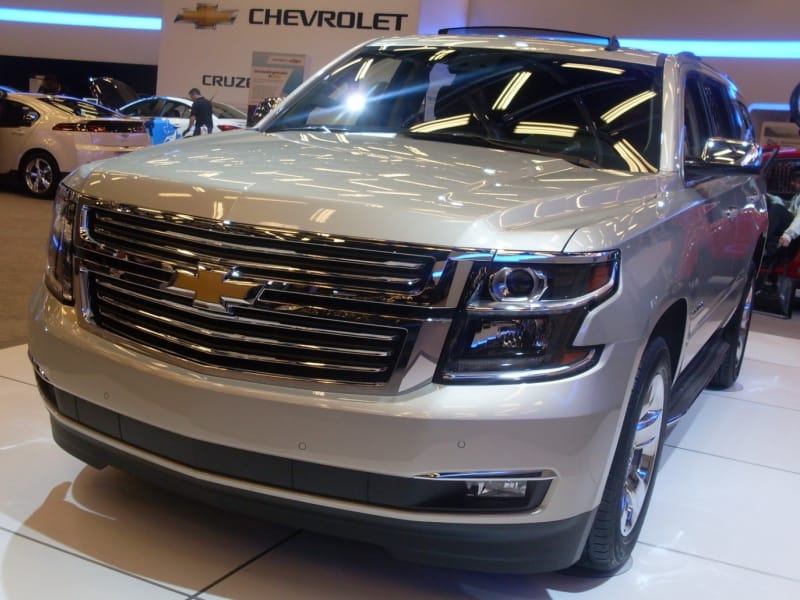 The Chevrolet Tahoe is a full-size SUV that is manufactured by General Motors. The vehicle made its debut in the early 1990s and is probably one of the best off-road and on-road SUVs available nowadays. In fact, the Insurance Institute for Highway Safety has even referred the Chevrolet Tahoe as one of the best vehicles of Chevrolet that offers ultimate safety, reliability, and performance. It is currently sold in the Middle East (except Israel), Mexico, Canada, and the US, and in a total of 16 years has generated sales exceeding 3,153,857 (in the US alone).

Therefore, there is no doubt that the vehicle has experienced great success over the years and will continue to do so even this year with its 2015 model. For those of you who don’t know, the first generation of the Tahoe was introduced in 1992 and was available in three body styles: 3-door, 4-door, and 5-door SUV, but then its second generation model was introduced in 2000. The vehicle was only available as a 4-door SUV, as the other body styles didn’t experience much success.

Regardless, the Tahoe managed to dominate the SUV market for quite a long time and even gave a tough competition to other SUV leaders in the market including Ford, Mercedes, and GM itself. Its fourth generation model namely the 2015 Chevrolet Tahoe made its debut as a pre-year model in 2014 with designs being released in the end months of December. This leaves us asking one important questions: Is the 2015 Chevrolet Tahoe just as good as the previous models?

Well, Chevrolet has always managed to exceed our expectations and introduce something new and unique in the market. Saying so, the 2015 Chevrolet Tahoe has raised our expectations bar even more and definitely proves to be as good, in fact even better than its counterparts. The vehicle is available for a price of only $46,300 and has generated healthy sales ever since its debut in 2014. The base model comes with standard features you can expect from any large SUV, but if you are looking for something better Chevrolet has even introduced numerous other configurations.

The 2015 Chevrolet Tahoe combines some of the best comfort and convenience and even luxury features of any modern vehicle with the best hard-working truck technology. It comes equipped with a large 5.3-liter V8 engine that can generate 383 pounds of torque and 355 HP, without breaking a sweat while also maintaining a good fuel-efficiency delivering approximately 16 (MPG) in the city and 23 MPG on the Highway. Therefore, the vehicle definitely proves to be strong and surprisingly fuel-efficient.

The vehicle is further backed up with a new and improved six-speed automatic transmission that can be electronically controlled while on the tow/haul and override mode, delivering marked improvement to the driving experience of the Tahoe while also increasing the SUV’s overall capability. The Direct Injection fuel system also allow for the more precise and efficient mixing of air-to-fuel ratio (hence explaining the fuel-efficiency).

And, the all-new cylinder deactivation mode allows drivers control the cylinders of the vehicle. For instance, upon switching a cylinder from the controls present on the steering, the engine turns off half of its cylinders under low-load conditions. Therefore, this process effectively turns the large 5.3-liter V-8 engine into a smaller 2.65-liter V-4 that can yield remarkable benefits in steady-state gas mileage. Best part of all: the process is completely and utterly transparent.

This means, the driver doesn’t feel or experience any kind of clunking, vibration, or loss in power while driving, except for the a change in the indicator gauge cluster LCD display that shifts from the “V8” to “V4”. Therefore, there is no doubt that the 2015 Chevrolet Tahoe has a more than improved engine. So, if you are looking for a vehicle that delivers a quieter highway cruising experience, seamless acceleration, and smooth out shifts from the transmission, then the 2015 Chevrolet Tahoe is definitely worth the buy.

In terms of exterior styling, the 2015 Chevrolet Tahoe comes with a new upright shape that is both, modern and bold. It has a new platform that is based on the 2014 model GMC Sierra and the 2014 Chevrolet Silverado pickup-trucks and features a unique sound deadening material that enhances cabin quietness and delivers a luxurious drive. The body panels have also been replaced with a new and more powerful material; hence it doesn’t share any similarities with its old counterparts.

From distance, however, the vehicle seems to have a boxy-type appearance, but upon closer inspection it can be noted that many aerodynamic improvements have been made that also help boost gas mileage and add to vehicle’s overall appearance. But, despite the engineering and aerodynamic shapes, the overall look still remains classy and sporty. Headlights look similar to those of the new Silverado model, but with a more refined shape.

Front and back bumpers, side skirts, mirrors, and wheels have also been replaced. Fog lamps and front tow hooks have also been included, thus making it easier to drive at night and have the vehicle towed in case of breakdowns or any other car-related issues. Other configurations too have identical styling features, but with larger polished and premium painted aluminum wheels. Therefore, there is no doubt that Chevrolet has definitely done its due diligence in terms of exterior styling.

Inside, the look of the 2015 Chevrolet Tahoe is more thoroughly revised. The previously cluttered appearance has finally been removed (just like many of the new SUVs and Pickup trucks introduced by Chevrolet). However, upon close inspection it can be noted that the vehicle shares similar details with Chevrolet’s Silverado, GMC’s Sierra, and the Chevrolet Avalanche, but in a way that presents a more substantial and durable sensation.

The rich color palettes, improved materials, and more modern themes and shapes in the interior have also aesthetically brought a premium feel to the vehicle. But, that’s not all. In fact, the new control panel and touch screen have also made it easier to control the vehicle even while driving, thus reducing the chances of being distracted and ending up in an accident.

New seats have also been added and overall interior space has been boosted allowing the vehicle to seat up to a total of 8 passengers. Therefore, the 2015 Chevrolet Tahoe proves to be the perfect family car for many, as it offers plenty of space seating all the kids, while also having plenty of infotainment features for them to enjoy.

The 2015 Chevrolet Tahoe now definitely looks the part of an up-to-$70,000 SUV, but does it deliver in terms of features? It does! From the liftgate to the dashboard, the vehicle is packed with more features and technology that will simply blow your mind. Although much of the features are related to safety and driver assistance, there is also a wide-range of connectivity and infotainment features.

These include a new information/navigation/audio system with MyLink Connectivity, an eight-inch color touchscreen, a 110-volt grounded outlet, six different power outlets (to ensure everyone’s devices stay charged), and up to six USB ports. A rear-seat entertainment system has also been added that features a ‘conversation mirror’ (like those in Limousines) for parents to keep an eye on their children and also a blue-ray DVD system for the kids to watch their favorite programs or cartoons on long routes.

Pushbutton start and Keyless entry have also been added for driver convenience. Other models of course come equipped with even better convenience and infotainment features that may push the car’s overall price to $70,000 or more, hence the equipment and convenience factor without doubt can match those of a luxury SUV or crossover.

Crash test ratings haven’t yet been released by the Insurance for Highway Safety (IIHS), as it tends not to test the large body-on frame. However, the National Highway Traffic Safety Administration (NHTSA) has given the vehicle top five-star ratings for side, rear and frontal impact protection. Other safety administrations in the US have also given the vehicle an overall safety rating of four stars.

The 2015 Chevrolet Tahoe has earned quite the reputation in just a matter of few months giving a tough competition to SUV leaders in the market including the 2015 Ford Expedition, GMC Yukon, and the large and powerful Toyota Sequoia. But, judging from the features mentioned above, the Chevrolet definitely proves to be the best of all!