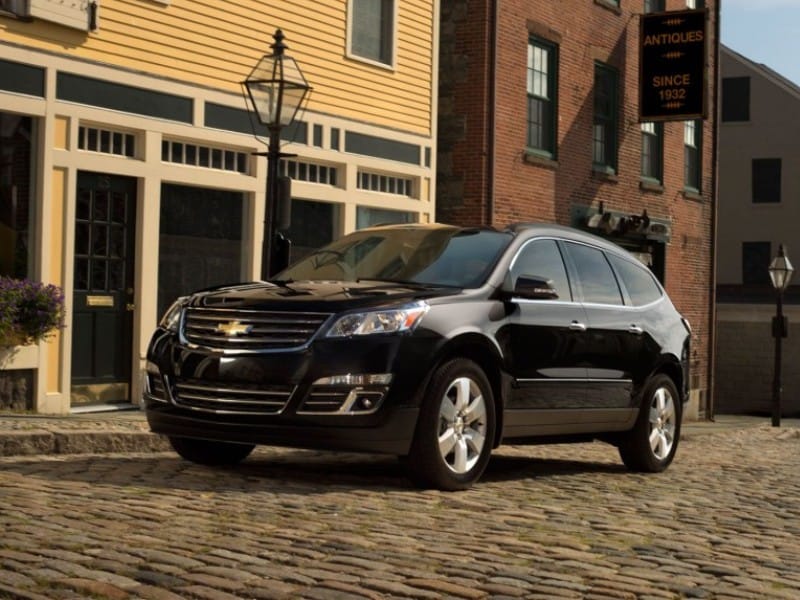 The Chevrolet Traverse is an eight seat mid-size crossover SUV that generally made its debut in 2008. It was introduced as a successor to both Chevrolet’s previous mid-size SUV hit models namely the Trail Blazer and the Uplander and has generated really impressive sales in a period of just 7 years, exceeding 600,421 units (in the US alone). The name, however, was originally used for a concept car that made its debut at the 2003 North American International Auto Show.

But, the concept gave away, as during the same year Chevrolet introduced its latest model year of the Equinox. The design of the Traverse is inspired by the Chevrolet Malibu and the famous Sequel Concept and has a unique sheet of metal that is way different than many mid-sized crossovers introduced by the company. Regardless, within a short period of time, the vehicle has earned quite a reputation for its performance, reliability, and durability and has undergone significant changes over the years.

In fact, in 2010 it became one of the very few Chevrolet vehicles to have been updated twice in the same year. No such changes have been made to the vehicle since other than a few improvements in features. However, the 2015 model year definitely proves to be the most different from the batch and proves to be one of the most popular family vehicles on the road today. It offers plenty of practicality and comfort for the entire family.

Not to mention, it also remains one of Chevrolet’s most spacious and passenger friendly vehicles on the market that offers a front center side airbag (a safety feature not many cars offer). It is available in numerous trims and configurations including LS AWD for a price tag of $32,995, 1LT for $33,795, 1LT AWD for $35,795, 2LT for $36,295, 2LT AWD for $38,295, LTZ for $41,935, and LTZ AWD for $43,935. However, the main focus of this review would be on the base LS model and its performance, exterior, interior, infotainment and safety features.

The 2015 Chevrolet is a big and powerful vehicle and it lets the driver know that! However, even so it remains as responsive as you would expect any other large family SUV to be. The vehicle comes equipped with a large and power 3.3 Liter V6 Engine that generates an impressive 266 pounds of torque and a horsepower of 281. This large engine helps with handling the 5,000 pound curb weight and even provides exceptional acceleration and top speed.

In fact, for a vehicle that weighs more 5,000 pounds the engine can easily give a top speed of 91 mph and reach from 0 to 60 in a matter of just 7.5 seconds. The all-wheel-drive configuration on the other hand could reach 0 to 60 in 6.8 seconds. Regardless, the vehicle is incredibly fast for its intended family-hauling purposes and can even tow up to 5,200 pounds. Handling and overall drive has also improved significantly with new changes in suspension and springs.

The old-style hydraulic power steering has also undergone some serious changes, thus adding to the vehicles quick response and boosting its overall ride. However, if you are looking for something even more powerful, then you can consider the 3.6-Liter direct-injection V-6 trim that is programmed for quicker shifts and better passing of power. The Chevrolet Traverse even has an impressive fuel consumption rating.

It can easily deliver up to 17 miles-per-gallon (MPG) in the city and 24 on the highway, with no compromise on power or acceleration. StabiliTrak and Traction control are also equipped in the vehicle, hence boosting its performance and safety during high speeds. Therefore, if you are looking for that perfect family vehicle that offers exceptional performance, reliability and fuel-efficiency, then the 2015 Chevrolet Traverse is definitely worth the buy.

In terms of exterior styling, the Traverse has never been something extremely exciting or attractive, but the vehicle proves to be incredibly functional for families. In fact, the 2015 Chevrolet Traverse adds up as a smart choice for families who desire extra safety, comfort, and space! It may look a little similar to GM’s large SUV models, but the Traverse is more of a tall family-friendly station wagon (might not prove to be a good option for car-enthusiasts).

If you look at the previous model year designs and the 2015 one, you will notice the Traverse has seen very little change from its original product in 2008. However, last year the vehicle was given a few minor touch ups here and there to enhance its overall aerodynamic (hence contributing to its performance and fuel efficiency). It doesn’t exactly have an athletic exterior design as compared to its counterparts the Buick Enclave and GMC Acadia, but its features are somewhat impressive.

For instance, the Traverse comes equipped with a three-bar upper grille and two-bar lower design (a feature we expect to notice in the future models in the Equinox). Other exterior features include darkened headlights that have a more sculpted round hood and updated front end. Therefore, the front-end of the car has undergone significant improvement mainly because of the addition of new headlamps that look similar to those of Chevy’s Camaro!

All in all, the vehicle may not have an exceptionally good looking modern appearance, but proves to be just fine and practical for families (its primary target market).

This year’s refresh in regards to interior design has brought a little more interest to the vehicle. Ambient lighting, contrast switching, new silver and wood accents have been added making the car’s interior look as refined as ever! The cockpit design is also incredibly simple with a layout that provides plenty of space to move around the vehicle without bumping your head everywhere. The climate controls have also been reconfigured and new soft-touch materials have been made available.

All of these new changes help set the perfect driving mood and feel right at home by helping your family settle in easily through its spacious 8 seats provided in three rows. Therefore, no matter what shape your life takes, the Traverse has the flexibility to go along with it providing exceptional seating and space through its ingenious second-row and third-row bench seats, which can transform or tucked under to provide sufficient space to carry your precious cargo.

All in all, the interior is incredibly luxurious, spacious, comfortable, and responsive, which is actually surprising for a vehicle that has a price tag for only $30,995 (something that not all top manufacturers in the world provide). Therefore, if you are looking for a practical vehicle with a practical interior, then the 2015 Chevrolet Traverse should definitely be at the top of your list!

The 2015 Chevrolet Traverse comes equipped with a range of infotainment features. These include screen-based navigation system, voice-command, automatic climate controls, leather upholstery, and a 6.4-inch color screen with Chevy’s MyLink feature that allows you to connect your smartphone, browse the internet or display everything on the small screen.

Additionally, there are also two standard USB ports in the rear of the center console, hence making it easier for passengers in the rear seats to charge their mobile devices. Other options available for an additional cost include a panoramic sunroof, dual exhausts, rear spoilers, DVD entertainment system, heated and cooled front seats, a power liftgate, a rearview camera, keyless entry, telescopic steering, cruise control, power windows, locks, and mirrors.

The 2015 Chevrolet Traverse is rated as one of the safest vehicles in the US (another reason why it’s a good choice for families)! It comes equipped with a wide range of occupant-protection technology and features that are actually unique to its segment. New features include the Siri Eyes Free that helps drivers keep their eyes on the road while driving, rather on their phones.

It even features the OnStar Technology of Chevrolet that includes six months of Connections and Directions service, with turn-by-turn navigation sent to the car by an actual operator. Therefore, there is no need to stop, input addresses, and wait for the best routes. This technology even include the famous Stolen Vehicle Assistance and an OnStar mobile application that allows you to remotely view vehicle information, start engine, or control locking through your mobile phone.

The Chevrolet Traverse has received numerous accolades and awards over the past years which include the Edmunds Most Popular Large Crossover, Kelley Blue Book’s Best Family Car, and Cars.com’s 2014 Best of the Year Award. Therefore, this has raised a great competition between Chevrolet and other top manufacturers such as GMC and Buick and their models the Acadia and Enclave.