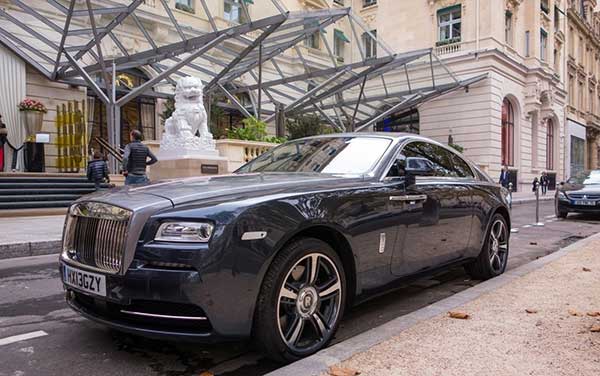 How to tell others on the street that you are rich? Surely it is impossible to move your mansion everywhere you go and clothes don’t always do much justice. So what is the solution? Buying a Rolls-Royce of course! We will cover the 2015 Rolls-Royce Wraith review in this post, talking about the interior, exterior, performance, features, safety and of course its main competitors.

If speed is your thing, then what is better than the new Rolls Royce Wraith, the most powerful and dynamic car in the history of the brand. The name is inspired by the Scottish word for ghost and shares its name with 1938 model of the original Rolls Royce Company. First unveiled at the Geneva motor show in January 2013, it combines the best features of both the modern and the traditional, offering the same luxury, elegance, and comfort as any other rolls Royce while still managing to look fresh and different. Being priced at $294,025, it is a symbol of opulence and wealth, a true gentlemen’s GT.

The car’s unholy 6.6-liter twin-turbo V-12 engine is powerful enough to produce an impressive 623 BHP. This is enough to take the car to a max speed of 155 mph and accelerate it 0 to 62 mph in less than 4.5 seconds. But as the adage goes, with great power comes great responsibility. While the car may love her owner, it hates the environment, for it has a terrible fuel economy of 13 mpg in the city and 21 on the highway. It does not only leave a grand impression on onlookers but also a sizeable carbon footprint.

The advanced satellite controlled ZP transmission ensures that the right gear is used for the right terrain, delivering better handling capabilities. But there is no option of shifting to a manual which can prove bothersome.

Despite the raw power, the car makes no compromise on the comfort. The Wraith’s electronically controlled air double-wishbone front suspension and multi-link rear make sure of that and the car makes little noise (though it is not as quiet as a Phantom) even when pushed to its limits and even though it is capable of producing torque of up to 590 lb-ft, it does so in a smooth and linear fashion, typical of an RR.

The steering like any Rolls Royce is light and easy. On normal roads, it is quite easy to drive and very responsive at speeds. On rugged surfaces, it is good but not as much as it should be. It not as fast as responsive around the corners, while the front end may look like it is following your every whim, the rear feels like it is just barely trying to keep up. But this is to be expected from a car of this size. Although the car is performance oriented, it would be insane to mistake a 17 foot, 5500-pound beast for a sports car.

The Wraith’s frame was designed by Rolls Royce Automotive Exterior Designer Pavle Trpinac and is an amazing mix of classical design and modern features. The Wraith is one of the few cars that is able to look great in a two-tone paint job.

The body is mostly steel with a heavy BMW influence in the architecture, but it doesn’t mean the look and feel of the wraith are any less Rolls Roycey. In fact, at first glance, the average Joe would not be able to tell much difference between the Wraith and other Rolls Royce cars as it shares many features with them. But on closer inspection, you will notice the Wraith’s design to be smoother with a slightly sloping back giving it a more agile, sporty look. It has also, compared to the Ghost, a shorter wheelbase. Oddly though, the most prominent feature of the Wraith, the fastback roofline isn’t British in style but rather Italian, being inspired by the design of car such the Maserati Ghibli 1967.

From the paint job to the brazing, it truly tells you the level of work given in the making of this car. It’s not a just a car but artistic masterpiece worthy of being exhibited at an art museum in London. The famous ornament “the spirit of ecstasy” is featured on the front middle beautifully like all other cars by the manufacturer.

Compared to the Phantom and Ghost, the seating of the Wraith is a little lower keeping in mind the nature of the car being that of a sports coupe. Immediately on entering the coupe, you bear witness to an extreme level of opulence and splendor. Everything in the cabin speaks of high quality and extravagant luxury. The seats are extremely comfortable and they, along with the dashboard, are covered in the finest of leather a car could have (this is another avenue which sparks the luxury vs. environmentally-friendly debate, which is not our concern in this article). The steering wheel is enormous; one feels the same with it as a kid does with the steering wheel of a normal sedan. The door panel inserts are of the best “canadel” wood pieces available. What is really impressive and appreciable is how excellently they have managed to successfully marry the classic looks of the interior with the latest technologies available to the 21st century, all the while keeping the tech features discreet and non-intrusive. Like the phantom, there is an absence of a tachometer. The interior is overall spacious with plenty of leg room, but the Wraith is not one for large families.

The car doesn’t shy away from flaunting all the fancy features you can expect from a great luxury car. These include:

You also get an amazing premium sound system with 8 speakers.

Owners now do not have to worry about the car’s iconic symbol “the spirit of ecstasy” ever getting stolen or damaged again as in the New Phantom, it comes with an automatic electronic retraction mechanism allowing it to retract if the need arises.

The HVAC (heating, ventilating, and air conditioning) and air filtration makes sure the car provides the right thermal comfort and air quality for the passengers and driver

The 2015 models come many more options and changes apart from the standard and with the company’s bespoke program, the number of features is limited only by the person’s imagination ( and money!).

Not satisfied with the color? No problem, choose one you like the 44000 options available.

The roof of the interior looks plain and boring? Don’t worry; just get the option of having a purpose-built a fiber-optic light system that can imitate the looks of a starry night.

The long doors are an unconventional rear hinged which could be problematic, and like other Rolls Royce cars, the Wraith isn’t crash tested. But there is no need of worrying about these minor quirks, for the car is jammed packed with safety features enough to satisfy even the staunchest critics about the high safety measures taken in its manufacturing. The Innovative CMS (Crash Management System) take up 2000 measurements per second and uses the data to execute appropriate safety measures in case of an accident occurring. Given its size, one would think it would be terribly hard to break the car to a standstill, but the truth is quite the contrary.  The 14.7-inch (front) and 14.6-inch (rear) vented disc brakes with 4-Wheel ABS, Brake Assist, Hill Hold Control and Electric Parking is more than enough to stop the behemoth in its tracks easily. Apart from these, it includes all the safety features you’ll find in the latest all Rolls Royce cars.

Its main Competitors are the Bentley’s Continental GT and Aston Martin’s Rapide S being priced at $306,425 and $207,820 respectively, making them cheaper than the Wraith.

Although other luxury cars have the advantage of better modern standards and even technology, in the end, they are just a car while a Rolls Royce is much more. It’s a symbol, a source of pride and worth the money for those who choose to buy it.

On the other hand, you may also check out our 2018 review for the Rolls-Royce Dawn.