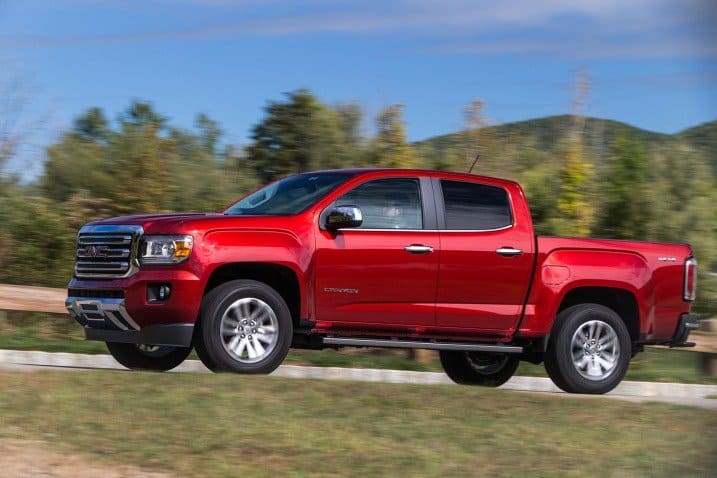 It’s pretty hard to drive in the canyons for the amateurs. But for an expert, it’s really an adventure. So is the GMC Canyon. Canyons are pretty economical over the wallet. The pricing starts from $21,900. As compared to the other small pickups the price level of Canyon is pretty much low.

Mini and small trucks are certainly the speciality of the American Automobile companies. This has been demonstrated equally by the General Motors Truck Company. Since their creation, the company has generated a lot of fame in the creation of light weight trucks.

GMC Canyon has further three models. Precisely all are the power machines, but more you invest the more power you get. Speed and acceleration is not the discussion for trucks and cabs. How much and how far can they go are the only words to listen.  But thanks to GMC for bringing up three distinctive machines under the banner of Canyon. Canyons aren’t fast enough but when it comes to the economy, yet they are the best in the competition. Cars are best in their own way but trucks like this have their ow charm.

See Also: Cars VS Trucks, We Discuss The Pros And Cons

The models of the Canyon franchise are distinguished upon their engine caliber and power generation. The 2.5 L is a four cylinder truck which has a decent performance category and a reasonable power generation technology.

Well, when it comes to the rest of the two models, we get massive powertrain and strengthened drivetrain. The 2.8 L is the 4 – cylinder turbocharged diesel engine and the 3.6 L is a V6 gasoline truck. Both are meant for lifting heavy weight.

22 miles per gallon in the city is among the lowest mileages of the trucks. Over a speed of 100 miles per hour, such an economy is pretty far low for the mini-truckers. Well, the Canyons are even quite powerful. They can tow 3,500 to 7,000 lbs of weight.

Generally, the 2WD models are taken away by the customers but some miners and track loaders prefer to take away the 4WD. That gives a bigger jump to our Canyons. Not like the rest, Canyon has the dual shaft motor. It means the Canyons are 2WD as well as 4WD (optional).

The Cargo box has been worked out to provide more loading capacity and space. It has been made attractive by painting the bed lines. Well, don’t be worried about loading unorthodox articles. The Canyons have the cargo shape accessories which are helpful in loading anything of any shape.

LED Signature front lighting is installed in Canyons. The GMC Canyons has a more luminous vision at night which helps driving over country roads during sunset or at night.

The Goodyear All – Terrain tires add additional road grip in these trucks. These half ton pound trucks are not just good enough in griping tracks, but they even have a nasty look. All – Terrain tires have added points to the cosmetics through their finest cuts and trims.

The internal structure of Canyon is pretty decent. It has eloquent spacing for up to five passengers. But if you mind, you can make four passengers to sit at the back seats, making six passengers. The back seat is almost five to six feet long, which a comfortable seating area.

Canyon is soundproof to the extent that it gives a very calming feeling to the people sitting inside. It has been designed with an Inlaid Dooring patched with triple door seals. Further sound deadeners are applied which makes the outside sound extremely feeble within the cabin.

Well as compared to other midsized trucks, Canyons are pretty comfortable. Seats have dual density foams which makes it easier to drive over long routes. They are colored in contrast stitching for adorable looks. While the hood and the dashboard has the carbon – fiber trims.

GMC practices the Autotrac Transfer Case. It has been added in the Canyons. This assists the driving over complicated routes, such as snowcapped paths or off the road. The Autotrac detects the condition of the track and adjusts the 2WD and 4WD accordingly. In case of more friction, slippery or stoppage the 4WD is engaged in the vehicles.

Canyon has been equipped with EZ – lift and lower tailgate. It is more of a fun to use than working. The IntelliLink has 8” screen with bigger and smooth user interface. Controls over the steer wheel are even made bigger which allows more readability to the driver. Well for the Apple fans, it is a good news, IntelliLink is the Apple CarPlay. It has the capability for supporting the 4-G LTE technology

The artificial technology has yet another support in Canyons. StabiliTrak assists the driving through intelligent braking and acceleration.

GMC practices Nitro carburizing technology which helps is increasing the life of the brake motors. It increases the driving tenure over the longer routes with increased braking life.

Exhaust Brakes have been installed in the Canyon trucks for driving over the hills. It is featured as Descent Controller.  This feature suppresses the engine compression which decreases the usage of conventional braking. It comes in handy when climbing down the hills and steep paths.

Under some uncertain circumstances, the StabiliTrak helps the drivers from inevitable situations. Over uneven paths the technology works to stabilize the acceleration or stop the truck by sensing the environment.

Chevrolet Colorado is yet another practitioner of the economy. This midsize truck is a complete rival of the GMC Canyon. It can’t be casted away that by 2014 Chevrolet and GMC were totally identical to each other. Bit to bit each and everything in their trucks were similar. But today they are slightly different.

The test drives explain that these monster are not just economical at the first bite, they are even economical over the tank. A 600 miles drive showed that an average EPA was distinguished over 28 mpg. Which is a pretty decent mileage for a truck. The load is its fate but along with towing Canyons are performance machines.