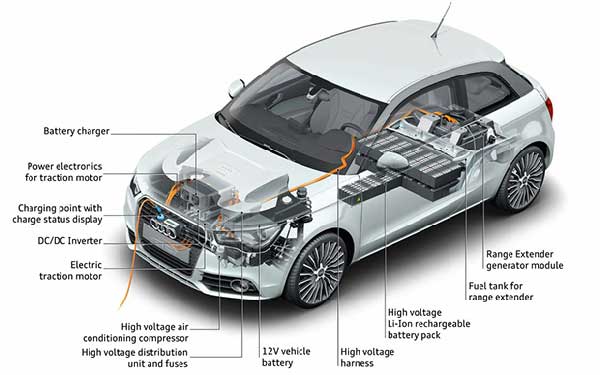 Electric cars have been around since the 19th century, but with the rise of gas and other cheap petroleum-based fuels in the beginning of the 20th century, the research of the electric engine was almost completely abandoned. In fact, the first electric car was designed by the British brilliant mind Thomas Parker, who also drafted and helped develop the London Underground. The first fully functional electric vehicle was put together by the same innovator in 1884, and it was based on custom fully rechargeable batteries. It is also said that Parker took an interest to designing electric engines because he was concerned about the high levels of pollution from the English capital.

What are electric vehicles and what do they use?

Electric automobiles are a response to the oil crisis from the last 3 to 4 decades. To provide a simple and short definition of this type of vehicles, they are automobiles that are essentially based on batteries and that depend on a charging source which implies electrical current. Drivers are mostly interested in purchasing this type of vehicle because they do not pollute and have been proven to reduce greenhouse emissions.

The only true and undeniable downfall of buying an electric automobile is the fact that charging stations are somewhat disparaged, therefore limiting drivers to only some particular geographic regions. This situation doesn’t necessarily take place that often in Western Europe, USA or some highly advanced parts of Asia, but in a number of Eastern European countries, electric cars aren’t that common and thus drivers usually choose hybrid vehicles. The latter are a less eco-friendly version of the electric automobile, because they use a combination between a classic combustion engine that depends on regular gas and a purely electric engine.

Another disadvantage of buying an electric car is its price. Most Americans and Europeans are reluctant when it comes to paying more on an electric vehicle than on a regular one. Price differences are sometimes so shocking that they actually convince customers to skip researching the electric automobile market altogether.

Fortunately, Tesla Motors has recently developed a battery system that could largely decrease charging costs and electric car expenses and that has already been adopted by famous car brands such as Toyota and Smart.

Probably the most acclaimed model of an electric automobile, the extraordinary Tesla Model S still rules the market even nowadays, although it was launched in 2012. Tesla Motors have made a name out of inventing cutting-edge technologies which they surprisingly release to the public, in an attempt to help the world to become fully environmentally friendly. Other car manufacturing companies have the rights to use the same technology in order to improve their models or even create new ones. Its price? Unfortunately, Tesla electic car does not come cheap, so people who intend to purchase one are bound to pay around $137,000.

According to some news, top models with positive reviews include the BMW i3 (circa $40,000), the Nissan Leaf (circa $26,000), the Mitsubishi MiEV (circa $38,000) and the Smart Fortwo Electric, which is also, by far, one of the cheapest, with a price of around $20,000. Smart has actually made a name out of creating a smart electric car for every model they launch. Aside from the models mentioned above, the Telegraph also recommends the Renault Twizy (circa $11,000).

The process of converting a regular internal combustion engine automobile into one using electric energy can be performed by anyone, even at home, and it apparently is among the most popular hobbies among car aficionados from the USA. Before deciding to convert a classic vehicle into an electric one, there are some things to keep in mind:

Stations can use any type of energy. Some can provide electricity generated by nearby plants, while others can produce it themselves, as is the case of charging stations that are also wind turbines. Some others can offer renewable batteries to clients, instead of recharging the ones they already have in their vehicles.

Hope you got all the information you needed, let us know your feedback by commenting below and share this article with others.