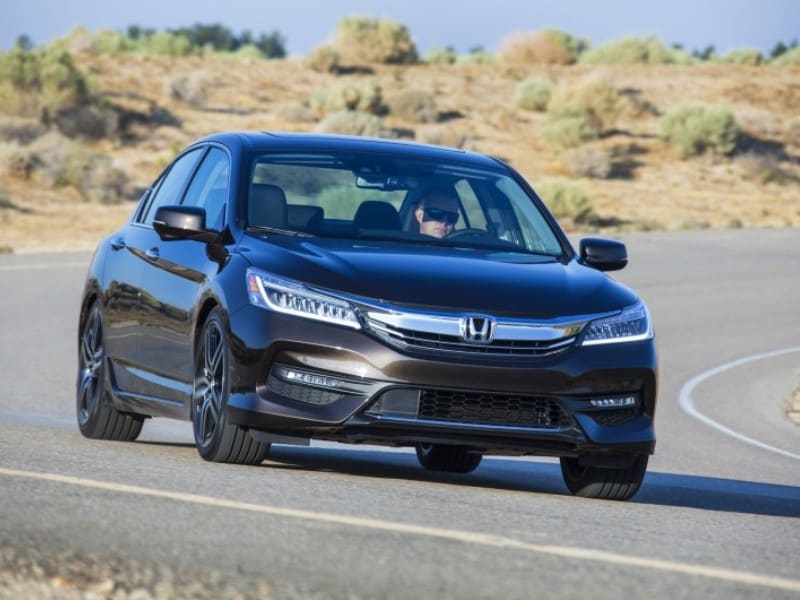 The Honda Accord is one of 2016’s finest. Recognized by car owners, as well as enthusiasts for its reliability and beauty, it’s no wonder the Accord has captivated many drivers out there. This type of car has actually been manufactured by Honda since 1976, which eventually became known for its four-door sedan variant. Since 1989, the Accord has been considered as one of the best-selling cars in the US. Interestingly, the Accord also became the first car from Honda to be produced in America, which is why it has always maintained a strong following in the States. With its exemplary record throughout the years, the 2016 model will surely continue this magnanimous feat. In fact, the Accord has been included on the Car and Driver 10Best list 30 times already, something that’s hard to achieve in the automobile industry. From this accomplishment alone, that really says something about this awesome car.

The 2016 model is as refreshing as the new year suggests with car enthusiasts being happy with the end product. As expected, the latest version is more technologically advanced in terms of safety features, performance, and every other feature a decent car needs to have generally spoken. Inside and out, the 2016 Accord delivers an improved appearance and functionality. Although most of the mechanicals came from the 2015 model, the Accord still offers two stout engine options fitted with a manual transmission, a conventional six-speed automatic, or a CVT. With the Accord’s strong reputation for being a great family car, this 2016 model seems to have no problem at all maintaining that message. The Accord has been one of the best-selling sedans for decades and this year’s enhancements will either make it or break it.

With its appeal and dependability, it’s amazing how these two important features can be used to describe a car. For both the coupe and the sedan, it holds 2.4 liters with 185-hp and a four and a six-speed manual, respectively. But this review will focus on Sports models, which increases to 189-hp. What makes this particular model stands out among the rest is its performance accompanied by its physical charm.

Firstly, it uses a high-flow exhaust with dual tips, which is actually helpful in other ways such as it is capacitated to squeeze more horsepower and torque from the 2.4-liter inline four-cylinder that it shares with others. With this, the total performance becomes 189 horsepower and 182 lb-ft, compared with the 185-181 elsewhere. The brakes are styled and created extraordinarily, too, equipped with 12.3-inch ventilated front rotors and 11.1-inch solid rotors in the rear. Compared with other models, such as the LX and the EX, this is quite a notable improvement.

The optional engine is Honda’s venerable 3.5-liter V-6. The V-6 also uses the i-VTEC technology but is combined with a multi-port fuel injection system. The all-aluminum engine makes a respectable 278 horsepower and 252 pound-feet of torque, which apparently, is a great deal of improvement.

However, if there’s one thing about the Accord that’s admirable is its fluid-ride and the way it handles the balance. Its communicative electric power steering also does not fail to impress as it combats its nose-heavy 59/41% weight distribution with light steering action. Despite its lightness, it never becomes limp. Acceleration is also at its finest considering it possesses zero-to-60-mph dash consuming a full 7.0 seconds and the quarter-mile run requiring 15.5 seconds with the Sport clearing the traps at 92 mph.

Physical appeal of the Honda Accord Sport was polished meticulously. This includes a body-colored decklid spoiler and rocker-panel extensions. The Accord’s front and rear fascias are actually a breath of fresh air. If you look at it, the styling is much bolder but in a good way. The angular projection makes it more attractive with a better grille, a new aluminum hood, and LED-encrusted lights. In the rear part of the car, the tail becomes longer yet sharper chrome accent piece that runs above the taillights. Speaking of the taillights, they’re also fresh-looking with their long LED piping, giving it an extra horizontal dimension. The car is, of course, flashier given the matching chrome piece resides along the lower section of the bumper. The side profile and doors, however, remain the same from that of last year. The Honda Accord Sport has LED fog lights as well and gets larger 19-inch rims, though all models really have LED daytime running lights and restyled wheels.

Inside are exclusive aluminum pedals and a leather-wrapped steering wheel taken or borrowed, rather, from the EX-L models. Already spacious as it is, the Honda Accord Sport’s interior is conservatively styled to perfection. Additionally, it’s incredibly equipped with an 8 -way power driver seat, height adjustable driver seat, bucket front seats, and driver seat with power adjustable lumbar support. The rear seats are also very comfy with folding rear seatback and folding with storage center armrest. No wonder getting in the 10Best Cars list is something it usually does and achieves. It’s good-looking, great at what it does as an automobile, and for only around $25,000, that sounds like a pretty incredible deal.

More interestingly, the lower touchscreen inside the car increased to a larger 7-inch unit. This is paired with the upper 7.7-inch screen in which both screens generate a natural display of information from GPS navigation to song titles, while the lower screen gives the driver the convenience to swipe, pinch, and tap. The rearview camera for 2016 is also much improved. Honda calls it the Multi-Angle view.

Honda Sensing, the driver aids which includes lane-keeping assist, adaptive cruise control, and collision mitigation, is available on the Sport, but with the addition of roughly $2000. Other than that, the Honda Accord Sports performs flawlessly. The manual is even better with tighter internal tolerances, improved synchronizers, and a new linkage for a more convenient functionality. Overall, the Honda Accord is recognized by many for its robust engine, responsive CVT, and graceful driving experience.

In addition, Honda improved the Accord’s steering and suspension for 2016 with test drivers reporting of a composed ride and handling. Power features are also available such as the Remote keyless power door locks and the 1 one-touch power windows. In terms of convenience, the Honda Accord doesn’t disappoint. There are Cruise control, Front and rear door pockets, Electric power steering, Audio and cruise controls on steering wheel, Rear view camera, Tilt and telescopic steering wheel, as well as make you enjoy the little things with Front and rear cupholders and Front seatback storage.

Any driver would also feel much comfort with Interior air filtration, Dual-zone climate controls – driver and passenger, and Dual illuminating vanity mirrors. As entertainment becomes as important as other features, this car delivers Radio data system, USB connection, Auxiliary audio input and USB with external media control, 160 watts stereo output, Element antenna, and 4 total speakers. There’s also a Bluetooth wireless data link for hands-free phone. Of course, with the Accord being technologically enhanced and all, one of its infotainment features focuses on Apple CarPlay and Google’s Android Auto, which are both presents. This means that car owners can connect their iPhone or Android devices to the Accord’s infotainment system and show a condensed version of their phones’ interfaces, which is a great way to travel or go basically anywhere.

Safety-wise, the Honda Accord delivers. From the standard safety features such as the Front and rear head airbags, Dual front side-mounted airbags, Child seat anchors, and Emergency braking assist, it generates more of the safety precautions so that you’d feel safe or you’d feel confident of your loved ones’ safety when going out. This includes Ventilated front disc / solid rear disc brakes, Rear door child safety locks, Engine Immobilizer, Passenger airbag occupant sensing deactivation, Stability control, Traction control, and many others. In fact, it has an overall NHTSA rating of five stars as a result of conducted crash tests.

As mentioned, Honda Sensing is offered, which means it comes with Collision Mitigation Braking System, Forward Collision Warning, Lane Keeping Assist, Road Departure Mitigation with Lane Departure Warning, and Adaptive Cruise Control. All trim levels have the option to go with Honda Sensing, although the range-topping Touring model gets it as standard.

The Honda Accord Sport may be an awesome piece of the car, but it sure does know how to challenge other car makers. With this, the Accord has a couple of equally fine competitors in the market with the Toyota Camry as its one fiercest rival, since Camry is also well-loved by many. In fact, the Toyota Camry and Accord have been competitors way back. Though Camry seemed to win in last year’s competition when it comes to sales produced, it’s too early to say which one to win this year, since the new Honda Accord stands on a very promising platform. Just like the Accord, the Camry is offered with both a four-cylinder and a V-6. Still, the Accord seems to be the obvious choice for those who want to row their own gears or want a coupe because neither is being offered by Toyota.