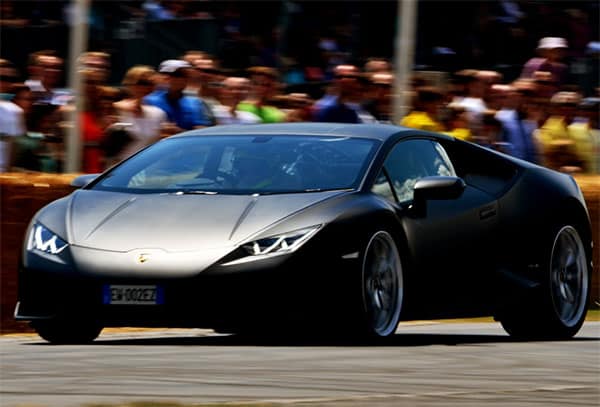 The successor of the highly successful Lamborghini Gallardo, The Huracán (meaning Hurricane in Spanish) is the latest sports car to make its way out of the Lamborghini assembly lines with the same fiery nature and power, characteristic of the Italian automaker. A beauty in design with a beast of an engine, the name of the model (like many of the previous Lamborghini cars) is inspired by a Spanish fighting bull who according to legend known for his courage. Priced at $237,250, horsepower of 602 and with a performance as splendid as the looks, The Huracán is a car fit for a king (or a sheikh for that matter). Continue reading the 2015 Lamborghini Huracan review to learn more about this supercar.

The Huracán was unveiled during the 2014 Geneva Auto Show in March 2014 and was released the same year. It comes in three variants: the standard Huracán LP 610-4 coupe for the commercial market, the Huracán LP 610-4 Polizia made for the Italian police as replacement for the two Gallardo that were destroyed in a car crash, and the Huracán LP620-2 Super Trofeo, a race only version but the focus of this review will be primarily on the LP 610-4 coupe.

The Huracán Processes the legendary 5.2 L V10 engine, a savage beast with a maximum power of 602 HP and a torque of 413 lb-ft. Making full use of the v10 and having an exceptional weight to power ratio of (5.20 lb)/hp, it is not surprising that the Huracán can easily manage a maximum speed of 202 mph and accelerate from 0 to 62 mph in an impressive 3.2 seconds. For the sake of balance and better performance, the Huracán is mid-engined. The V10 hold both a direct fuel injection and multi-point fuel injection, thus being able to harness the advantages that both the systems have to offer to drivers.

The Huracán also features a start-stop system, increasing the engine efficiency of the car by shutting down or restarting the internal combustion engine automatically, also reducing the amount of time the engine spends idling. This also increases fuel efficiency and reduces emissions. The car is an electronically controlled all-wheel drive and monitors the movement of the car using three accelerometers and three gyroscopes located at the Huracán’s center of gravity, hence providing improved traction, movement and overall performance. In fact, the traction is so good that the car turns around a tight corner effortlessly and without the driver feeling any force.

The new “Doppia Frizione’ gearbox is a 7-speed dual clutch transmission is easy and quick to shift and performs differently on modes selected. It has a magnetically controlled suspension system which makes use of magnetorheological dampers that allows it to quickly adapt to new road conditions. In order to decelerate this high velocity steel stallion when braking, the car employs Hydraulic dual-circuit brake system with vacuum brake servo unit having six-piston calipers at the front and four-piston calipers at the rear.

Unfortunately, the Hurricane is only being offered in the market with automatic transmission which to some drivers can make the Huracán feel a little bit tamed when driving. Still the Huracán features the same unholy engine sound that a Lamborghini is so famous for.  One drawback in this otherwise extraordinary vehicle is it under steers when pushed to the limit; feeling somewhat non-adjustable.

Its wedge like profile and angular design strikes a perfect balance between elegance and aggressiveness. The car frame is made of lightweight hybrid aluminum/carbon fiber with the outer skin being made from aluminum, and composite material. The  Huracán  exterior features many changes from its predecessor, the Gallardo, softer lines and greater urbanity to it’s with its Y-shaped running  LED lights it boast a more meaner yet feminine design reducing drag yet producing 50 % more down force.  Overall the exterior is very much detailed and the company has made sure it can build enough down force when driving, eliminating the use of active or moving aerodynamic components.

The Huracán comes with range of interior options to fit the needs of its driver, including the choice of having full electric control and sport seats heating. The cabin definitely has the same jet cockpit like feel to it that is characteristic of all Lamborghinis. Hex-shaped vents fixed on top of the flat dash match the six-sided instrument cluster .Unlike most sports cars however, the  Huracán ’s  infotainment is not located in the center stack allowing (according to the  company) “for the driver to see what he wants to see”.

The center console has been carefully designed with a good aesthetic appeal and is well organized .The Nappa leathered seating are very comfortable yet firm, aptly serving the driver’s and passengers’ need for a relaxed ride. Not surprisingly, there is some Audi influence here and there but the quality of material used is excellent and gives the car a luxurious feel that is on par with any that Ferrari or McLaren can offer. Despite its low profile, the forward visibility is terrific and the new full-TFT screen is a nice add-on.

Also despite all the high tech jammed into the inside, it has astonishingly few buttons with the majority of functions fixed on the steering wheel. The ANIMA feature lies at the bottom of the wheel. What was really a disappointment was how useless the rear view mirror was with visibility almost nonexistent. But this can be countered by having a glass rear deck.

The Huracán is one of the first street cars that comes with the 12.3 inch TFT virtual cockpit and the world’s very first series production car to make use of inertial navigation system. Lamborghini Piattaforma Inerziale (LPI). The TFT virtual cockpit powered by Nacidia’s Tegra 3 offers high-definition3D computer graphics, GPS navigation, Bluetooth Google Earth and Multi Media Interface-like menu and dashboard controls. The car’s head lamps are full Led providing a higher contrast level in the dark compared to your more conventional headlamps. It also comes with the option of  “Lamborghini dynamic steering” which allows the driver to switch the steering performance from normal steering to one that give you a race-like feeling. The Adaptive Network Intelligent Management (ANIMA) oversees the engine, the transmission, LDS, the all-wheel drive, magnetorheological suspension, and the electronic stability control, allowing a driver to select modes to change the car’s performance accordingly. It comes three modes: the standard drive mode STRADA, the active and aggressive SPORT and the thrilling CORSA. Modes are selectable via the ANIMA SWITCH.

It makes use of Electronic Stability Control, a computerized system that ensures that improves the vehicle’s overall stability and has a secondary function called the traction control system which prevents loss of traction on roads .The 4-Wheel Disc Brakes and the car’s smart technology makes sure that while on the road, no matter what the speed, you avoid serious accidents, especially if a person or a vehicle unexpectedly comes in your path. Add to that the fact that the Huracán comes packed with all the standard safety features that come with a luxury sports car including Dual Stage Driver And Passenger Seat-Mounted front and Side Airbags, Side Impact Beams and Low Tire Pressure Warning.

The Lamborghini Huracán faces tough competition in the market with the likes of Ferrari 458 and McLaren 650S with both competing with the Huracán in the on road super car category. If we compare the three, they are competitively price being at $ 237,250, $ 243,090 and $ 267,900 respectively, this can give the Huracán a slight advantage for being relatively cheaper. There is a risk of soon becoming outclassed when it comes to performance but for now the V10 ensures other supercars stay humbled and on the road. The Harucan feels easier to drive compared to rivals and despite the shrinking market in the west, Asian market’s appetite for this car keeps on increasing. With it trademark feel and design, the Huracán has guaranteed that even in the stiffest of competition, a good car can sell itself.