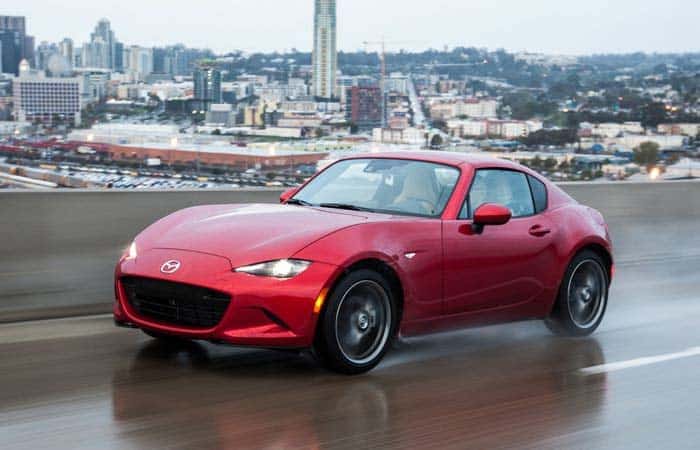 What you prefer to call it? Just the MX-5, the Miata or the MX-5 Miata? Whatever you call, it will still stay notorious. Well, we heard that Mazda is planning to increases the horses in this car. But without the increment, she still has got some nice guts to take over the cheeky city level sports cars.

Back in 1989, Mazda introduced the MX-5 Miata, for the first time. They brought it to the Chicago Auto Show for the introductory display. Well, the MX-5 Miata had not successor at that time. It was certainly an innovation that was brought in. But in a way, this car is considered to be a revoking spirit of the 50s British Sports Cars. That is a pretty cruel kind of empathy for a car like this.

Since then, the MX-5 Miata has continued its journey in numerous markets. And even there have been some rebadged versions of this car as well. Such as the Eunos Roadster which stayed in the Japanese market for a very short time.

With time there have been four generations launched for this car. And each one of them had something better than the last. While the third and the fourth generation brought in a spectacular improvement to this car. Not only the performance got better, but even the exterior designing earned some stylish shape. Even the third generation carried numerous special editions such as the MX-5 Superlight and the Miyako.

The present generation is the fourth one which was introduced back in 2016. While it was initially displayed during the 2014 Paris Motor Show. In this whole long journey, the MX-5 Miata has earned numerous awards, like the 1990s Automobile of the Year and the Fresh Ride of the Year.

The MX-5 Miata is kind of a legendary vehicle from Mazda. Though there are numerous other Mazdas that have a smooth performance. But the MX-5 Miata is a pretty little mind-blowing freak.

The base version is offered with the 1.5 L 4-cylinder SkyActiv engine. Not to forget, the SkyActive technology is one of the favorites for Mazda. Well, the base powertrain offers 129 hp of power with 111 lb-ft of torque. And this is what you will find everywhere in the world.

While the North American market gets the 2.0 L 4-cylinder SkyActiv engine. This is practically a power machine with some good 158 horses galloping at 148 lb-ft of torque. Nevertheless, this is the performance version for the whole MX-5 Miata series. With this powertrain, you can certainly score 133 mph on the track and make a 0-62 mph launch within 6.1 seconds.

Away from everything else, the MX-5 Miata comes mated with the 6-speed manual transmission. While the 6-speed automatic stays optional. Well, if you are a performance junky, you would never prefer the automatic version. And if you prefer economy over performance then the manual is rusty for you.

Besides the performance, the handling of this car is a joy. It makes you feel effortless and gives loads of pleasure. The braking is even at its best. The best stopping distance we noted from 70-0 mph is around 160 – 165 feet. That is fine enough for an everyday car.

The Mazda MX-5 Miata gets a sharp and sexy appearance. The bold features include the projector lamps, LED fog lights, 16 and 17-inch alloy wheel, retro shaped taillights and a giant Mazda signature grille. The MX-5 Miata is shy to weight because of the aluminum used in the design. Further, the convertible top is available as the soft top and the retractable rigid top. The Miata with the rigid roof is notable as the MX-5 RF (retractable fastback).

The interior detailing is pretty fine in this car. The Mazda MX-5 Miata includes leather seats, leather-wrapped shift knobs, and parking brake paddle. Further, it gets the armrest, carpeted floor mats with the driver footrest.

The seating space is available for two, the driver and the front row passenger. Certainly, you would not complain about the space in this car. While the MX-5 Miata even offers a modest space for the cargo and luggage.

The Mazda MX-5 Miata comes with the dual frontal and side airbags. Further, it gets the door beams to reduce the collision impact. Along with that, it includes the adjustable seatbelts that have pretensioners. Ahead of that, the active safety features include blind spot monitoring, rear cross traffic alert, cruise control and the tire pressure monitoring system. The finest trim even includes the lane keeping assist.

When talking about the Mazda MX-5 Miata, you would definitely come around the Fiat 124 Spider. The 124 Spider is certainly the same car as the MX-5 Miata. But it lacks a bit in performance.

Well, the MX-5 Miata is certainly the best in its slot. It is a good performance, the ride quality is enjoyable and the price is subtle. It really makes it an obvious option if you need a savvy kind of a sports car.