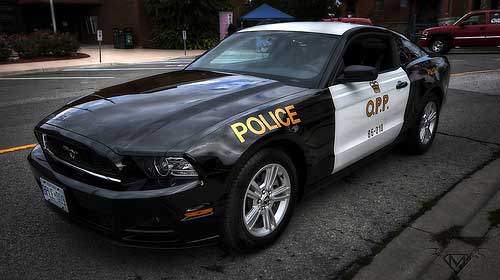 To protect and to serve are two main duties of any policeman. Peace seldom comes up in the day of an officer, because fighting crime is no easy task. Some very few happy moments do happen while on the job, and one of them is when the local administration decides to buy a set of new cars. And not any type of cars… expensive and fast ones, too!

Italians like their luxurious cars. The first one we will talk about didn’t even come from abroad. They came in the possession of a Lamborghini Gallardo, after the manufacturer decided that it would be a nice addition to the Italian State Police. What’s even cooler about this vehicle is that it was specially equipped with gun racks and a video recording system because it is, after all, a police automobile.

In October 2014, the fresh new ride of the Italian Police became the Lamborghini Huracan. This one’s a super-car, and it’s no wonder they call it that. With a whopping 602 hp and a 5.2-liter V10 engine, this car’s bound to be both fast and furious.

The British have always had their share of extravagant cars, with brands like Land Rover and Aston Martin. One of their current picks in sports cars is the Lotus Evora S. The model now belongs to officers in Norfolk, Sussex, Essex, Cambridgeshire and a few other areas from the UK.

In the spirit of tradition from the United Kingdom, the police department had to pick a classic British model belonging to a classic British manufacturer. That’s how the Jaguar XF became an automobile used in chasing delinquents. It may be a diesel, but thanks to a maximum speed of 155 mph, it’s a clear way of keeping up with the bad guys.

Netherlands inhabitants are known for their eccentricities, and this feature also had to be seen in official police cars. No car aficionado could picture an old Porsche 356 as the ride of an officer. What’s even more surprising is that the model is a convertible, which makes it a little difficult for constables to survive shootings.

Although they may not be as extravagant as their Italian neighbors, Spain’s officers still deserve a nice drive. And they’ll get it, thanks to the new Renault Megane RS, of which only two pieces were recently purchased by the Spanish Police Forces. Periodismo del motor reported that the two vehicles will mostly be used for escorting official and political characters. The former has no reason to be concerned for their safety, as the automobiles are fully armored.

Dubai is known for being one of the richest countries of our times. Everything about Dubai is lavish, outrageously expensive and strikingly shiny. Police officers from this country actually have the opportunity of driving a Ferrari FF, which is regularly used on the town. Since Ferraris are always limited editions, collectors sell them from one to the other, which is why the model we’re now talking about ended up costing almost $6 million.

Yet another fast sports car donned by Dubai constables is the Lamborghini Aventador, which came before the Ferrari FF. The Aventador was released in honor of Lamborghini’s 50th anniversary. Unfortunately for the model, it had to be painted white and green, because this is the official design of police vehicles from the United Arab Emirates. A Ferrari in white and green would be considered a sacrilege for some… but who are we to judge?

Americans can pick almost any car model, be it for their police forces or for their personal use. After all, the US is one of the most powerful economic countries in the world. Which is how bluecoats from this country can choose from driving a Chevrolet Corvette or a Nissan GT-R. Sure, Nissan might not be an American brand after all, but the Japanese manufacturer has installed subsidiaries in the US, so the model is produced locally. In fact, the GT-R was the inspiration behind a super-secret project, which dealt with creating an almost indestructible automobile.

They may come from the land down under, but Australians have select Nordic tastes. Their chosen Volvo S60 Polestar is powered by a 3.0-liter V6 engine, which produces 350 bhp. What’s more, the Volvo has a top speed of 155 mph. Australian officers also own a series of HSB GTSs, but these ones are more focused on impressing civilians than on chasing criminals. Don’t be mistaken, though, for these automobiles are pursuit cars. You won’t get anywhere too far if you’re chased by a cop driving an HSB GTS.