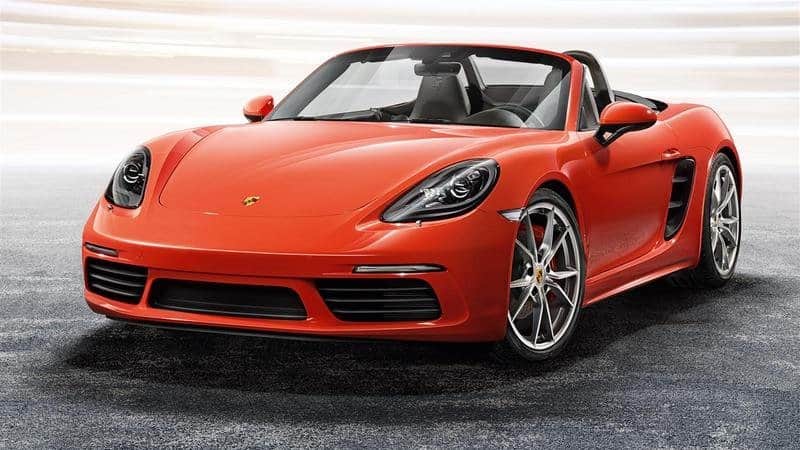 Boxster had six – cylinder flat engines in the previous generations. The Second generation had more powerful drivetrain as compared to the first generation. But the Third generation has some weekend drivetrain. Now Boxster comes with a four in line cylinder engine.

While the flat 4 is more powerful engine as compared to the previous engines used. The torque interpretation is quite higher in the present day model of Porsche Boxster. The only thing missing is the sound that it used to produce. That growl really was an attraction for a number of Boxster fans.

The Porsche 718 Boxster has received some impressive touching on its cosmetics. It looks quite smarter and attractive as compared to its ancestors.

The MSRP of Porsche Boxster is $56,000. A sporty luxury car in such a price would definitely be economical on the wallet.

Porsche 718 Boxster is a rear wheel drive. It comes with two gearing methods. The first is the simple manual gearbox with 6 speeds. While the automatic one is the 7 – speed PDK dual clutch automatic gearbox. The gearbox comprises of the aluminum made structure, which reduces the weight of the gearing system. While when it is compared to the manual gearbox, it is heavier.

The PDK gearboxes are pretty helpful in making the drive economical. As the gearing ratio are divided in a way that the 3rd and 7th gear of PDK doesn’t let much gas flow.

The reduced cylinder count has not much effected the performance. But it definitely has helped in bettering the mileage. The Porsche 718 Boxster has an improved mileage which saves almost 22% more fuel then the last models of the franchise. When it comes to the CO2 emission, then 718 Boxster is quite environmental friendly.

The single turbocharged mid-engine Boxster has pretty decent performance schedules. The powertrain has significantly overrun its ancestors. The track records showed that 718 Boxster has 5 seconds of better acceleration than the older versions. The turbocharging has made this possible. As it does not allow the flow of energy into atmosphere as a waste. Besides it utilizes it to its max. That how the reduced cylinders in 718 Boxster have not effected on the performance. Rather the performance has increased.

An additional powertrain boosting option is offered in Porsche 718 Boxster S. Over 3500 rpm the car can generate more torque, letting more acceleration and speed. While comparing the performance graphs of 718 Boxster, the older 3.4 L Boxster is not in competition. It is pretty much weaker than the present day model.

The Happy Face Porsche 718 Boxster has got some enchanting cosmetic updates. The updates include enhanced aerodynamics and increased range of colors. The ride height has been decreased which gives reduction into the drag coefficients.

While the initial looks don’t give a much changed shape. Although at times it seems that this present day shape is as same as it was in 1996. But don’t worry, Porsche has really improvised the shape.

Especially the aerodynamics are taken care of nicely. And they even prove to be useful for speedy driving. Take spoiler as the example; the automated spoiler is a great support to reduce the air frictional work and drag force while the older versions suffered.

The Porsche 718 Boxster has a classy inclusion of luxurious material. The interior looks pretty simple in the first look but it is rich in material and colors. The seats are comfortable as compared to its previous variants. Even the trunk space is ample for placing luggage. Rather when it compared to a number of sedans, it has much more space in trunk.

The sound insulators are another enchanting feature of the Boxster. The outside sound is quite feeble or certainly absent within the car. It is a cool feature when driving over the jam-packed roads.

The Bose Surround Sound System makes it a fun to drive. The sound is pretty addictive and soothing when it comes from the speakers. It grooves the whole environment.

The 7 inch infotainment is the Porsche’s self-designed system. It has a good navigational panel with responsive navigational stats. Further the system is pretty prompt in responding and gives a 0% of lag.

The Porsche 718 Boxster weighs heavier than its predecessors. It is because of its enhanced braking system. It allows more room for safe driving at high speed. The braking standards of Porsche 718 Boxster has even crossed the milestones of the Safety Regulation Departments.

Besides the braking, rest of the safety parameters are completely followed by this German fella. It has ample amount of air bags, predictive safety system, emergency braking and everything else.

The Chevrolet Corvette is a competition for our Porsche 718 Boxster. Though Corvette has some 50 to 100 more horses to run. But still the Boxster has the power to reach them easily and smoothly. The price is not even a bigger notch between both the models.

This mid – engine Porsche 718 Boxster is a fun to drive. If the price is considered, then it is definitely an economical car. Whether it’s the price tag or the fuel economy, Boxster is truly friendly. And when it comes to the performance, it’s a complete performance package.