If you were to choose from a list of European sports coupes, which one would you go for? It most certainly depends on the type of person you are and what you are looking for in a sports car. (Read this article to learn how a car defines your personality) What if I told you that there is a car out there that has a little bit of everything? Continue reading to see the 2015 Porsche 911 Carrera 4S Review. 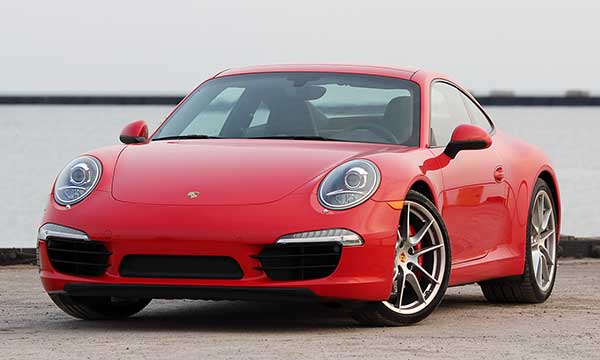 The Porsche 911 is a two-door, high performance sports car manufactured by German automobile company Porsche. The car was introduced in 1963 and, although it has undergone continuous development, the basic concept has suffered very few changes. Its distinctive design reminds us of the initial car even 50 years later. The vehicle has got rear-engine and independent rear suspension. The engine was air-cooled until 1998 when the Type 996 was introduced.

Throughout the years, the 911 has suffered many modifications in order to be able to perform in racing or rallying competitions and is renowned for being one of the best competition cars ever. In the mid-1970s, the 911 Carrera RSRs won important world championship sports car races including Targa Florio, Daytona, Sebring and Nürburgring.

The 911 came fifth in the 1999 international poll for the Car of the Century Award. It is one of the oldest sports coupes still in production and, judging by how things are going, will remain on the market for many years.

Although it has changed in many ways since the last generation, the Porsche 911 keeps its iconic shape and continues to offer a wide range of models including the Turbo S and the GT3, as well as the Carrera and Carrera S models, both of which are available with all-wheel drive. The base Carrera comes with a 350-horsepower flat-six engine, while the S models get a 400-horsepower version.

The Interior Of The Porsche 911 Carrera 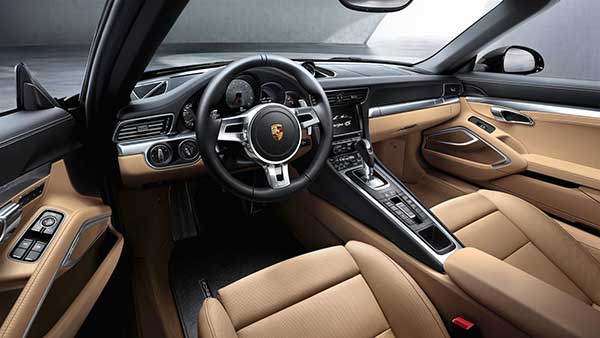 If you are looking to buy a 911 model, you should know that, although you have the possibility to choose from different performance options, the cabins are pretty much identical throughout the lineup. All 911 models have comfortable front seats, as well as a large windshield and side windows. The rear seats are mostly used for extra luggage, since they provide minimal leg room and are not very comfortable. The rest of the luggage can go into the car’s front trunk which offers a fair amount of space.

Narrowing things down to the 2015 Porsche 911 Carrera 4S, the interior looks similar to that of other 911 models: sport seats with 4-way electric adjustment of backrest and seat height, integral headrests in front seats, split folding rear seat backrests, partial leather front seats with seat centers, side bolsters and headrests upholstered in grained leather, as well as sports steering wheel with manual fore/aft and height adjustment.

When it comes to the technical specifications, the car has a 3.8 liter horizontally opposed 6-cylinder aluminum engine which creates 400 horsepower and 325 lb.-ft. of torque. The car is all-wheel drive and uses a manual or a 7-speed Porsche Doppelkupplung (PDK) transmission. The top speed is of 299 km/h, while the acceleration from 0 – 100 km/h (0 – 62 mph) takes 4.5 seconds.

A car this fast needs excellent brake systems. That is why the Porsche 911 Carrera 4S uses 6-piston aluminum fixed monobloc calipers front and 4-piston aluminum fixed monobloc calipers rear, as well as internally ventilated brake discs that are 340 mm in diameter front and 330 mm in diameter rear.  There is also an ABS, as well as an electric parking brake.

It’s fast and comfortable but is it safe? The Porsche 911 Carrera 4S comes with airbags for driver and front passenger (including a knee airbag for both). The Porsche Side Impact Protection System (POSIP) for driver and front passenger comes with side impact protection elements in each door, integral thorax airbags in seat backrests and head airbags in each door panel. There is also an engine immobilizer and alarm system with contact-sensitive exterior protection and radar-based interior surveillance.

What is the price for all of these? Well, the price for a 2015 911 Carrera 4S starts at around USD 264,750. You might think it’s expensive but I’m sure that, by now, we’ve all figured out what an amazing car this really is. It combines traditional looks with state-of-the-art technology to provide owners with memorable driving experiences. This is one of those cars that never grow old. In other words, this iconic  sports coupe could go on display 50 years from now and create the same emotion within the public as it does in 2014. 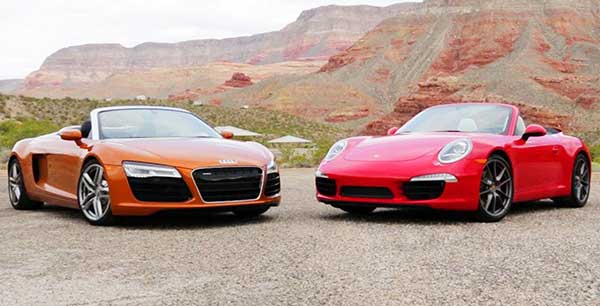 The similarities between these two cars lie in the fact that both are German sports coupes, both have all-wheel drive transmissions and both have naturally-aspirated engines.

Similar to the 911 Carrera 4S, the Audi R8 comes with a choice of two transmissions. Whichever you choose, the R-tronic single-clutch automatic with paddle shifters or the manual one, both are seven-speed transmissions. In the engine department, although the R8 has a 4.2-liter V8 which creates 420 horsepower, it only creates 317 lb.-ft. of torque compared to Porsche’s 325 lb.-ft. of torque. Even if their engines are very different, both cars go from 0 to 100 km/h in only 4.5 seconds.

However, the Porsche Carrera 911 4S has an entire history behind it that makes it valuable and appreciated not only for its performance, but also for its ability of keeping generations of drivers entertained for so many years. In fact, Bill Gates is known to have 3 Porsches

Regardless of the model, the Porsche 911 is much more than an average sports coupe. It’s THE sports coupe!