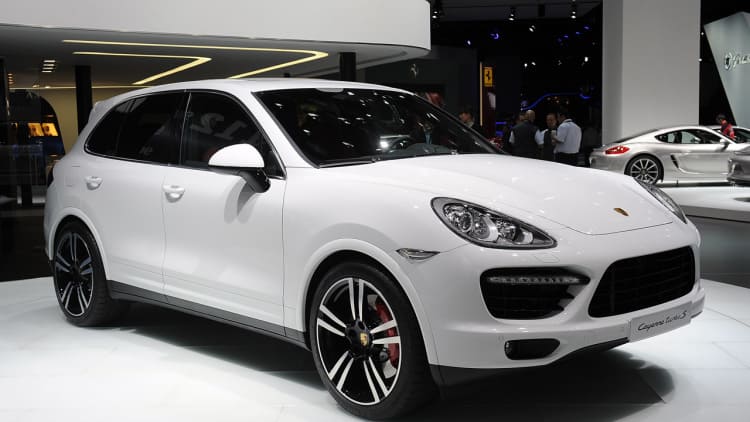 The commendable Porsche has maintained its trend of luxury and class. The German auto manufacturer has a long trail of performance and luxury cars. From the hatch for the year 2017, we have grabbed the Porsche Cayenne. It is starting from $56,900.

The Porsche Cayenne has 5 models in range with 15 sub-models. The whole range comprises of a number of engine technologies, different variants of chassis, unique powertrains and some different cosmetics. Cayenne was first launched in 2002 as the model of 2003.

Porsche has been noted for its performance cars. There is an enormous range of variety of sports cars. Among them Cayenne is the only one, having four doors, but it’s not termed as a sporty vehicle.

The present day version of Cayenne is in its second generation. The version was revealed in 2010 as the model for 2011. There had been some drastic changes in the franchise. The major inclusion included the addition of electric hybrid versions.

Porsche last time created a V8 car in 1995. That was the Porsche 928. Since then Cayenne is the first vehicle from Porsche which used the V8 engine technology.

The models of the franchise are Base, S, GTS, Turbo and Turbo S. The sub-models are divided into these models while the E – Hybrid models have a distinct classification.

Though Porsche doesn’t call it a sports car, but the natural instinct of Porsche could still be found in Cayenne. The handsomely crafted Porsche Cayenne delivers a tremendous performance on and off road along with spectacular sports drive.

Let’s get started with our Porsche Cayenne!

Porsche has equipped the whole series of Cayenne with a number of power and drivetrains. The Cayenne Base models are equipped with 3.6 L VR6 engine. The engine is capable of producing 300 lb – ft of torque with 300 horses. When you jump above this range, you meet the Cayenne S, having 3.6 L V6 engine. Though it’s a spectacular performance car, but it has been deemed as a low profile performance technology. The engine is capable of towing as low as 7,716 lb of weight. Cayenne S even holds the branch of Hybrid drive tech. The Cayenne S E – Hybrid comes with a 3.0 L V6 engine having 440 lb – ft of torque with 410 horses. The performance of Electric Hybrid Cayenne S is more than the standard S. The standard Cayenne S has 70 lb – ft less torque than the electric version.

In 2008 Porsche revised the engine technology of Cayenne. Since then it is having a direct injection engine.

The second generation of Cayenne resembles the Volkswagen Touareg. It is because both of the cars share a similar platform. The frame and doors of both the vehicles are similar. The happy face is the designing signature for Porsche. Every next Porsche you will get will have a happy face. Similarly, the Porsche Cayenne has a bright happy face.

Indeed the Cayenne is the Porsche setup for domestic driving, but the body structure offers more than that. The weight adjustment and aerodynamics provide relative support in helping the performance. Usually, such aerodynamic structures are not available in a number of other SUVs. Porsche made the luxury and performance happen together.

The interior is a mix of leather fabrics and fine wood cuttings. The regular interior includes the long journey seats, ample to fit in passengers of any age and physique. Whether you drive on heavily packed roads or freeways, the seats make the ride comfortable.

Besides the regular interior, there are a number of add-ons available for every mode of Cayenne, such as the ventilated seats.

When you go around the back, the cargo capacity of the Cayenne SUV is not adequate. It is wished to have much space at the back when one is having a family to travel with. Still, it doesn’t become its catch.

Cayenne’s cabin gives a cockpit look. There are a number of buttons and switches on the setter and other consoles to operate the functions of the car. Well, it is not that hard to learn the functionality of every function.

Porsche has featured a number of safety tools. Besides the passive safety program, Cayenne has driver’s assistive tools, such as the lane departure and blind spot monitoring.

Though the rear screen vision is less, due to larger side pillars. But it doesn’t affect the reversing capability of Cayenne. The 360o Camera System and parking sensors help in reversing the car.

The Germans get the competition from the Italians. The Maserati is coming up with the V6 Levante. Both the cars have much brass for the challenge. After going through the performance of Levante, it won’t be wrong to say that Germans have got a hard challenge. When you talk about the price, it is even the same for both the cars. Even Maserati has made Levante an ambassador of luxury, like Porsche does with Cayenne.

Certainly, Porsche has created Cayenne as a family wayfarer. The powerful engine and superior technology makes it a fantastic car to drive. The topping of luxury and comfort fills the arc of perfection.