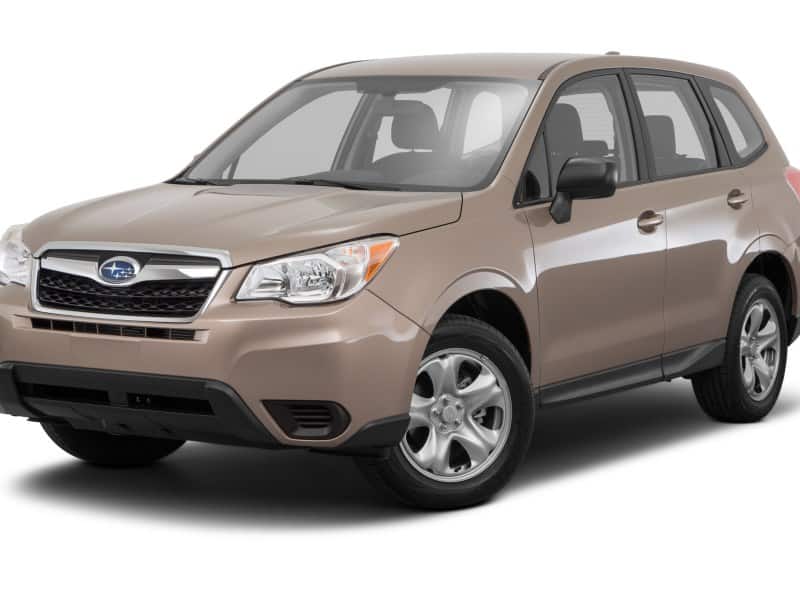 Manufactured beginning in 1997, the Subaru Forester is a compact crossover that was introduced as a compact crossover wagon. Since then, the Japanese-made vehicle has been well-received among car owners. Because of its practical functionality, reliability, and good looks, the Forester has garnered recognition, including Motor Trend’s 2009 and 2014 SUV of the Year and The Car Connection’s Best Car To Buy 2014. It was actually introduced in 1995 in the Tokyo Motor Show, but was only sold in 1997 also in Japan. The following year, it reached the United States. Built to look like a car, but only taller in facade, and also possesses higher h-point seating, and an all-wheel drive drive train. Its slogan “SUV tough, Car Easy” became well-resonated among car drivers. Forester also replaced the Subaru Subaru Impreza Gravel Express, though the latter’s production continued in the US (where it is known as Subaru Outback Sport). The Forester has a low center of gravity, making it meet the United States federal safety standards for passenger vehicles.

In the early 2000s, the second generation of the Subaru Forester was introduced in the form of the 2003 model at an auto show in Chicago. It was still on the Impreza platform, but on the new one, thus it featured fine-tuning enhancements. For instance, the 2003 model was designed to have weight-saving improvements in the forms of aluminum hood, perforated rails, and a hydro-formed front sub-frame. Of all the changes, the most remarkable was the 2.5 L versions being offered. In America, turbo charged 2.5L models were then introduced. With innovation as its greatest inspiration, Subaru presented the STI variant of the Forester. Called the Forester STI, it was made available in the Japanese market. In 2006, Subaru had notable changes, such as redesigned headlights, tail-lights, bonnet, grille, front bumper and side-moldings.

Subaru’s third generation was introduced in 2008. The dimensions of the vehicle were taken from the structure of the Japanese-spec Impreza wagon with the rear platform of the U.S.-spec Impreza sedan. With these are notable changes, such as the wheelbase’s increase to 3.5 inches (89 mm), with overall increases of 3.0 inches (76 mm) in length, 1.8 inches (46 mm) in width and 4.3 inches (110 mm) in height. Also, fans of the this model were thrilled because Subaru finally removed the frameless side windows that were used on Subarus since the early 1970s, making it more modern. It definitely is an improvement from the older wagon design. Other remarkable enhancements are the bigger dimensions and the sloping roof line with more cargo space. The fourth and the latest generation was then introduced in 2012, with the latest model, the 2016 Subaru Forester.

The 2016 Subaru Forester offers multiple trims powered by one of two engines. The base engine is a 2.5L 4-cylinder, which makes 170 hp. This particular engine has two options for the transmission – a 6-speed manual or a continuously variable unit. The turbocharged engine, which is only optional, runs on 2.0L which makes 250 hp. However, the turbocharged engine is only available with a consistently variable transmission. Despite this, the CVT has a mode where it copies a traditional manual that makes upshifts and downshifts possible via paddles on the steering column. On the other hand, 2.5i Foresters are being offered in four different trims. These are Base, Premium, Limited and Touring.

Base trims, being base, don’t have most of the lucrative features, but they’re still remarkably decent with other good and essential features like the tilting and telescoping steering wheel with audio controls, a sunglass holder, a 4-speaker stereo with MP3 capabilities, a 4.3-inch color multi-function display, and a rear backup camera. If you’re someone who’s into getting most of life and experience, you would want the premium models where a panoramic sunroof, roof rails, 17-inch aluminum alloy wheels, a 10-way power adjustable driver’s seat, reclining rear seats, and a 6-speaker stereo are available.

There are also limited models. These, on the other hand, are standards models but with CVT transmission and with leather seating, in addition to heated front seats, a power liftgate, fog lights, a rear spoiler and heated mirrors are also standard equipment. The top-of-the-line Touring models, of course, being the highest end, are equipped with the most amazing features. These include limited trim plus a navigation system, a dual-zone automatic climate control system, and 18-inch wheels.

The wheels of the 2016 Subaru Forester are as robust as ever with 17″ Steel with a spare also made of steel. To complete its rugged look, there’s a compact spare tire mounted inside under cargo. It has been made to be more appealing with its clearcoat paint, giving it a polished appearance. There’s a black bodyside cladding, the side windows trim and the front windshield trim are all in black, while the door handles are body-colored. The rear windows are equipped with fixed internal wiper and defroster, while the glass is light tinted. The panels are galvanized steel and there’s also a grille with chrome bar. Another strong feature of its exterior is the power rear gate. With this, you can open and close the rear lift gate at the push of a button on your key fob, or by controls on the dashboard, or even on the hatch. In addition to these, this also enables you to adjust the height of the gate.

The interior of the Subaru Forester is as prolific as the exterior. Considered a great vehicle for the family, the inside of the Forester was made to suffice every family’s needs as part of their journey. There’s air filtration, 3 12V DC Power Outlets, Engine Immobilizer, Front Center Armrest, and the seats are comfy with cloth black materials. It has a Perimeter Alarm, Valet Function, Front Cupholder, and has a 5-Person Seating Capacity. There’s Cruise Control with Steering Wheel Controls, and even a Locking Glove Box and Driver Foot Rest for the driver’s soothing driving experience. Other inside features are Digital/Analog Display, Trip Computer, Systems Monitor, Power Door Locks, and Cargo Area Concealed Storage, among others.

The 2016 Subaru Forester also uses the EyeSight Driver Assist, which means that the security system of the car reacts to circumstances even before you do. Example is both audio and visual alert telling you that it senses collision. If you don’t hit the brakes automatically, it will with the likeliness of really saving your life. With EyeSight Driver Assist, it can also optimize cruise control and give a warning when the driver is going outside their lane. This new technology is really more of a concerned buddy that will have your back no matter what. With price range that starts at $22,395, the 2016 Subaru Forester is certainy a

Even the older versions of the Subaru Forester has met the required safety standards in the US. Being the 2010s and all, it is righteous to believe that the safety features of the vehicle have gone way better. Strong in accident avoidance, the safety features include the standard anti-lock brakes, traction control and stability control. Other than the base model, the Forester is also equipped with a rear backup camera to guide the driver and passengers more thoroughly. Its symmetrical all-wheel-drive system is also a standard for all the models. Other safety equipment include several airbags, including knee and side curtain airbags and a rollover sensor, while keyless entry and an engine immobilizer are two of its standard features. In addition, the 2016 Subaru Forester applies the STARLINK Safety Plus package, which has an Automatic Collision Notification. This will alert an advisor should there be an emergency. The said package also has remote services, which allows you to lock or unlock your vehicle using your computer or mobile device. There’s also the Enhanced Roadside Assistance.

Being a well-known car internationally, Subaru Forester has earned competitors along the way. Its Japanese competitors are Mitsubishi RVR and the Suzuki Grand Vitara.