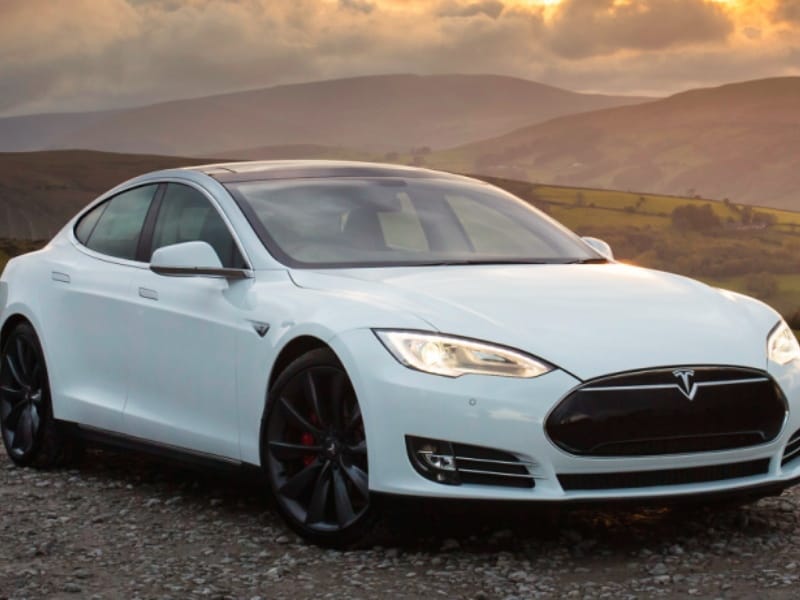 A five-door full-sized all-electric luxury liftback, the Tesla Model S is obviously produced by Tesla Motors. It was first introduced in June 2012. Upon its introduction, the Model S became prominent among car enthusiasts. It even became the first electric car to reach atop the monthly new car sales ranking in any country, topping twice in Norway and Denmark. The official range for this car set by United States Environmental Protection Agency (EPA) was 85 kWh (310 MJ) battery pack is 265 miles (426 km). At the time, it was higher than any other electric car. Its energy consumption was rated at 237.5 watt·hour per kilometer (38 kWh/100 mi or 24 kWh/100 km) for a combined fuel economy of 89 miles per gallon gasoline equivalent (2.64 L/100 km or 107 mpg-imp) by the EPA.

In 2014, it reached No. 2 as the world’s best selling plug-in electric vehicle and became No. 1 the following year. As of late last year, the Model S’s leading markets are the United States and Norway, as well as China, the Netherlands, Canada, Denmark, Germany, and Switzerland. Next to the Nissan Leaf, the Model S is the world’s second best selling plug-in car in history as of December 2015. Justifying its popularity, the Tesla Model S has won various awards. These include the 2013 World Green Car of the Year, 2013 Motor Trend Car of the Year, Automobile magazine’s 2013 Car of the Year, Time Magazine Best 25 Inventions of the Year 2012 award and even the Consumer Reports’ top-scoring car ever. Car and Driver went on to name the Model S as the Car of the Century in 2015.

For this year, there’s the 2016 Tesla Model S entering its fifth model year. It is consistent with being the highest-range electric car sold in any kind of volume. Model S was actually designed by Franz von Holzhausen. He was with Mazda North American Operations prior to working with Tesla Motors. The car was designed to have different versions, which differs in energy capacity (battery size), power (motor size), and equipment. The 2016 Model S cars did not start its production until January of this year. Typically, Tesla assigns a “model year” based on the car’s final-assembly date.

It also standard for Model S Performance to have an All-Wheel Drive Dual Motor, combining the high performance rear motor with a high efficiency front motor to achieve supercar acceleration, from from zero to 60 miles per hour in 2.8 seconds. The Dual Motor Model S is apparently an improvement on traditional all-wheel drive systems. Incredibly, Model S digitally and independently controls torque to the front and rear wheels made possible by two motors, that is one in the front and one in the rear. With this, there is an unmatched traction control in all conditions and in all respects. Another highlight of the Tesla Model S is its lighter, smaller and more efficient motor when compared to its rear wheel drive counterpart. With this, improved range and faster acceleration are pretty much achieved and secured.

Externally, the Model S is very charming, speedy, and generally very comfy. Designed with oozing endurance, the Model S is great in a way that the air flows smoothly above, as well as around and below in order to reduce drag. As a result, it maximizes battery range. There’s the smart air suspension that lowers the car’s height at highway speeds to decrease its frontal area. Its intelligence is also beyond compare as electronically controlled vents remain closed until sensors detect that cooling is needed. The door handles of the Model S are a wonder themselves. They automatically extend when a key is in close proximity. Otherwise, they retract into the body of the car when no longer being used. This this generates a seamless surface for air to pass over. The streamlined body panels indicate that the Model S does not have a fuel door. The hidden charge port then opens on its own when you approach the driver’s side taillight with a charging connector. Thus, the charging connector cannot be removed until Model S is unlocked.

The interior of the Model S is as superb as you can get. To achieve the dynamics of a recording studio, the cabin combines thorough noise engineering paired with Tesla’s quiet powertrain. Of course, the treasure inside is none other than the 17 inch touchscreen. It is angled toward the driver and includes day and night modes for excellent visibility at all times without any distraction. Of course, mobile connectivity is within grasp so you can easily find your destination, be relaxed with music, or easily find the city’s new restaurant.

Model S also receives over the air software updates that add new features and refresh the look and the overall feel of the touchscreen. In addition to all these, there’s the Autopilot Convenience Features comprising of automatic steering and summon, traffic-aware cruise control, automatic lane centering and changing, parking space detection, self parallel parking, and automatic high/low beam headlights. With all these features highlighting ease, design, technology, and functionality, the Tesla Model S seems to be the perfect car, at least to those who can afford it since it starts at around $70,000.

Model S definitely gives abundantly when it comes to safety. In fact, it earned the highest safety rating in the United States by the National Highway Traffic Safety Administration. From this alone, it is enough reason to highly consider the Tesla Model S as a car of your choice, as safety should be one of the highest priorities when choosing for a vehicle. Basically, this car is designed to be the safest car on the road and it has proved itself to be so, even reviewed by others with a consistent 5 stars in all categories of the National Highway Traffic Safety Administration (NHTSA) crash test.

The distinctive electric drivetrain that occupies beneath the car’s aluminum occupant cell in its own subframe is primarily the main reason why the Model S is the safety car out there. This is because the said positioning lowers the car’s center of gravity. As a result, this enhances handling and minimizes roll-over risk. This also replaces the heavy engine block with impact absorbing boron steel rails. All this makes the safety trick that makes the Tesla Model S awesome. There’s also the essential factor in which side impacts are met by aluminum pillars reinforced with steel rails for the purpose of reducing intrusion. The passengers are protected of course, and even the battery pack all while improving the stiffness of the roof. In dire circumstances like accidents, there are are eight airbags to protect front and rear occupants while the battery source becomes disconnected to the main power source. Since there will always be accidents, it is better to trust a vehicle that is capable of lowering risks and saving lives.

Because the Tesla Model S is a top choice among car enthusiasts when it comes to a luxury sedan, there have been a series of competitions aimed directly at the Model S. Some of these are the Porsche Mission E, the Mercedes-Benz Concept IAA, the BMW i5, the Fisker Karma (Re-boot) E-Lux, and Audi which focuses on electric crossovers.