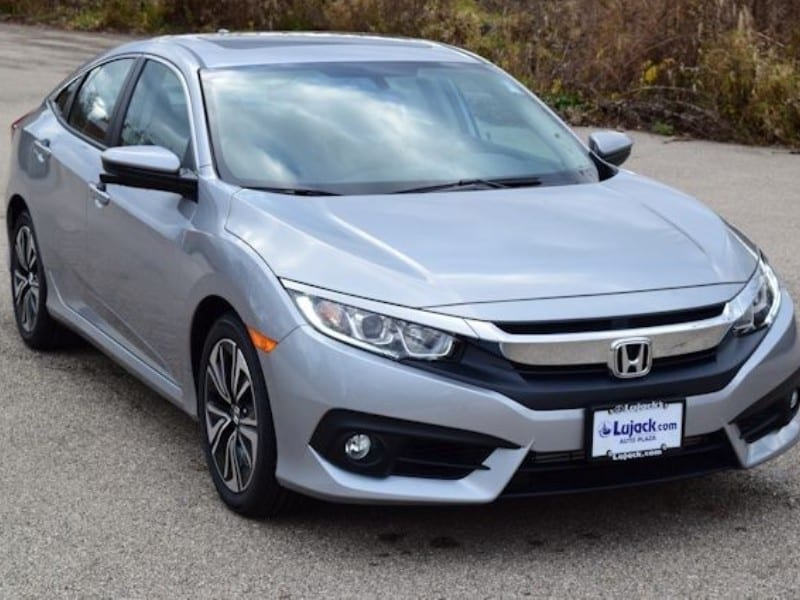 A line of compact cars generated by Honda, the Civic was originally a sub-compact, which has just undergone changes throughout the years in the form of numerous generations. Currently, it fits between the Honda Fit and Accord. It was in 1972 when the first Honda Civic was introduced, but only as a 2-door model. It became a 3-door hatchback shortly after. Despite its small dimensions, the Civic became a likable vehicle because of its great interior space. At the time, it had a 1169 cc transverse engine and front-wheel drive like the British Mini. In its subsequent generations, the Honda Civic became well-known for its reliability and for being environment-friendly. This car has also established itself as a vehicle focusing on fuel efficiency, which is something that many car buyers highly consider when deciding what to buy. Its later designs became more sporty in style and nature with a much more improved performance and robust reliability.

Being an essential part of all Honda line-ups, the Honda Civic became the basis of other Honda models, such as the Honda CR-X, the Honda CR-X del Sol, the Honda Concerto, the first generation Honda Prelude, the Honda Civic Shuttle (later to become the Honda Orthia), and the Honda CR-V. The Honda Civic is also a best-seller in the United States and Canada for many years already. In Japan, however, production of non-hybrid Civic ended in August 2010 because it no longer qualifies the Japanese Government dimension regulations in terms of the width. Production of Civic and Civic hybrid continued for export markets though.

Currently in its tenth generation, the 2016 Civic sedan was introduced in September 2015 with sales starting in November that year. The Civic couple, on the other hand, began its sales on March. Honda Civic are offered in different variations: sedan, coupe, 5-door hatchback, Si trims, and Type-R models. With Honda fans and users, this is a wonderful time to review the all-new 2016 Honda Civic and how it differs from the ones in the previous generations, as well as to similar cars from different companies. With a price starting from $18,000, the 2016 Honda Civic is the stylish car that’s reasonably priced without compromising the quality and many essential features.

Two I4 engines are available, either a naturally aspirated 2.0-liter DOHC paired to either a 6-speed manual or CVT transmission, or an optional turbocharged direct injected 1.5-liter DOHC engine. Compared to previous offerings, the new Civic is much lighter while the internal friction has also been lessened. All this while giving out an additional 15 horsepower and 9 lb-ft of torque. This results to an overall of 158 horsepower at 6500 rpm and 138 lb-ft at 4200 rpm.

The 2.0-liter engine paired with the CVT runs on an EPA-estimated fuel economy of 31/41/35 mpg city/highway combined. The wheelbase is 1.2 inches longer made standard with rear disc brakes. Basically, the Civic is made on a new platform that uses better grade steels, and the unit body, as mentioned is lighter, 68 pounds lighter to be exact. The center of gravity has been reduced 0.6 inches as well. Another important aspect of the new Honda Civic is the fluid-filled suspension bushings that was added to minimize NHV.

Models such as Civic EX-T uses a 1.5-liter, turbocharged engine to ensure high cruise efficiency and strong performance on the road. Because significant developments to the power steering and rear suspension have been made, the new Honda Civic promises a smoother driving and riding experience without affecting the excitement of driving it. Every journey becomes more remarkably peaceful and exciting at the same time. Surely, you car’s performance has something to do when you’re in a good mood behind the wheels.

The exterior of the new 2016 Honda Civic is something to celebrate for. Why not? The improvements are apparently much better looking and the design has never been this sleek and stylish. With the large greenhouse, the Civic has already removed the old fashioned front quarter windows. The entire structure of the car has several sculpting details that add to its already charming physical appearance. It also has some distinctive enhancements, which includes the rear-three-quarter view as a result of the C-shaped LED taillamps, as well as the tapering windows and the deep-seated backlight. With all these, it can be easily concluded that the 2016 Honda Civic is one nicely-designed ride that fits whatever lifestyle you have.

In addition, the said awesome improvements since it’s been too long since Honda implemented such style changes. High beams along with amber LED turn signals, on the other hand, are optional. Giving importance to everyday situations such as dealing with unpredictable weather, the all-new Honda Civic has the Rain-Sensing Windshield Wipers. Apparently, the Civic knows when it’s raining, and can activate its wipers automatically. Putting efficiency at its topmost priority, Honda also designed the all-new civic as intelligent and useful as it can possible be with the Capless Fuel System. This means that the fuel filler neck opens when on contact with the pump nozzle. As a result, every refill is achieved in the simplest and cleanest way possible.

The interior of the 2016 Honda Civic is as exciting as the outer look. The environment of the cabin brings the presence of safety and adventure at the same time. Stylishly modern and cozy, car owners would definitely love the much-improved interior presence of this vehicle. Inside, it can be noticed that the dashboard is much wider, there’s a one-inch lower front hip point, and a taller center console that’s designed to serve whatever the passenger needs. For those who busies themselves with the sceneries of the outside world, this vehicle indulges with the low windshield cowl. With a seating capacity of five passengers, three heat levels in the front can be opted (though only from the EX-T and above).

The good news is, the new Civic allows outboard rear passengers to enjoy heated seats, too. Front row seats, on the other hand, are designed for a personalized soothing journey. It doesn’t matter whether you’re the driver or the passenger, as long as you’re inside this fantastic car, you’re in for a relaxing ride. To made use of space, there’s the 60/40 Split Rear Seats. If you need more cargo space, this capability becomes handy. All you need to do is fold down one or both sides of the rear seatback to make way for both gear and passengers. Of course, a car’s interior is never complete without media accessibility. With the Apply CarPlay, it enables you to access many of your smartphone features on the Display Audio touch-screen, making the driving experience as entertaining and relaxing as possible.

With the sleek design and the overall modern style being secured in the all-new Honda Civic 2016, car owners and enthusiasts alike can be assured that the features are just as exhilarating as the enhanced physical improvements. There’s the the 7-Inch Display Audio with Touch-Screen where you can touch, pinch and swipe your way through, music, podcasts, and many more. The Steering Wheel Controls allows you to be distracted for a little while without worrying about your safety.

With this feature, you can change the music or take a call with ease. Standard for all models are Bluetooth Streaming Audio and USB Audio Interface. The 2016 Honda Civic also utilizes the Lane Keeping Assist System, which helps you stay in a detected lane should you stray outside the said allotted lane. Then there’s the Tech Center Console Storage where you can put all your personal stuff for safekeeping. With the huge console storage, the Honda Civic is surely designed to meet car buyers’ higher standards when it comes to convenience. Other features highlighting convenience are Remote Engine Start, Electric Parking Brake, and Dual-Zone Climate Control. All these certainly come in handy in normal scenarios, so there’s really nothing here that’s less important.

The safety features are made more robust with the Advanced Compatibility Engineering Body Structure. This body structure is one of Honda’s exclusive features. The said design is for enhancing passenger protection and crash compatibility in frontal collisions by distributing crash energy more evenly throughout the front of the vehicle. As Honda recognizes that safety is one of the main concerns of all car buyers, it does not hesitate to invest in such technology that would ensure safety in all levels and respects.

There’s also the Tire Pressure Monitoring System. This means that you’re notified when the pressure in any of your four tires become very low. Next is the Multi-Angle Rearview Camera. This enables you to clearly see what’s behind you using three various angles: normal, top-down and wide. Another strong safety precaution that the Civic imposes is in the form of Collision Mitigation Braking System.

This means that with this safety feature, the Civic stops automatically when it senses an unavoidable collision with another vehicle right in front of you. These features are all part of the Honda Sensing features with Road Departure Mitigation, Forward Collision Warning, and Roadside Assistance. Over the years, the Honda Civic keeps on improving when it comes to its safety features. Because of the continuous improvements in terms of safety, the National Highway Traffic Safety Administration (NHTSA) in the United States has given the recent Honda Civic models higher ratings compared to before.

However, it was the eighth-generation Civic sedan’s crash test performance, which has been rated impressively by both the US government’s NHTSA and even the Insurance Institute for Highway Safety. Moreover, the IIHS awarded the Civic sedan with a rating of “good” on both frontal and side impact crash tests. It also lists the Civic as the second-best 2007 small car in overall crash-worthiness, while the Civic coupe is rated and considered “acceptable” in the side impact test.

Starting out in the 1970s and lasting in the automobile industry this long despite tough competition really says something about the endurance and consistency of the Honda Civic. Especially with the new version this year, car enthusiasts and buyers alike would really highly consider this car with the sleek design, reasonable price, and fuel-efficiency features as the main reasons. Thus, it is not surprising that the Honda Civic has accumulated competitors throughout the years of being a well-known car in the industry. Some of its toughest competitors are the Toyota Corolla, Chevrolet’s Cruze, Ford Focus, Hyundai Elantra, Nissan Sentra, Volkswagen Jetta, and the Mazda3. All are equally nice-looking cars with strong performances, thus making this kind of competition a bit bloody.

On the other hand, you may also check out our 2018 review of the Honda City.