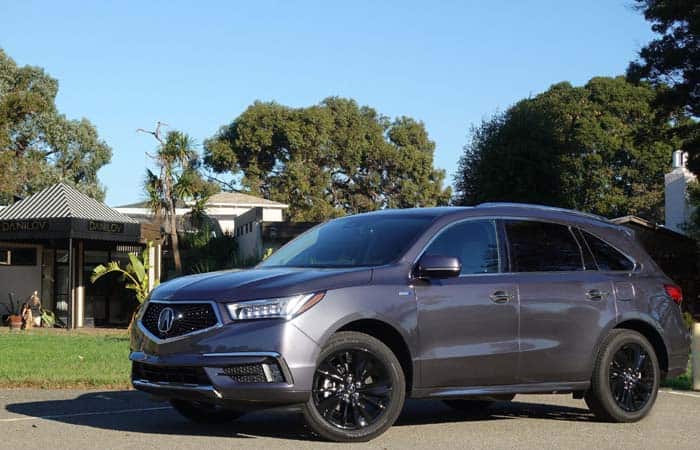 The Acura MDX ranks below the best 10 SUVs and it takes a week position among the hybrid SUVs. Though MDX has spent almost a couple of decades in the market. But its influence is just on par.

The hybrids are considered to be stronger, efficient, faster and reliable than the standard versions. But it is not something you can find every time. Sometimes the hybrid versions appear to be lethargic, lousy and even stupid. They are more like a white elephant that needs the whole acre of sugarcane to be fed.

Well, some similar traits are found the in Acura MDX Hybrid. The vehicle is certainly better than the standard edition. But it is not as much appealing than its counterparts. Well, under all such consequences the MDX Hybrid does find some fans. Some like the looks, some appreciate the technology and some prefer its interior appointment. Overall the Acura MDX Hybrid scored 7.5 out of 10 marks for the consumer preference.

The refreshed MDX Hybrid would be available with an improved transmission program. Along with that, the idle-stop system has also received some improvements. Further, a new optional package has been added for the exterior and interior add-ons.

Ahead of that, the MDX Hybrid is only available with the Technology package trim and the Advance Package. The pricing begins at $52,800 while it goes up to $59,550.

The Acura MDX Hybrid gets a different drivetrain than the standard version. It comes with the 3.0 L naturally aspirated V6 engine powered along 3 synchronous permanent magnets AC motors.

The powertrain comes mated with the 7-speed dual clutch automatic transmission with manual shift mode. The revised transmission programming has improved the gear timing and the torque routing, making it accelerate faster than the previous version. While it launches from 0-62 mph within 5.8 seconds with a top speed of 110 mph. But still, it is slower than some of its competitors in the market. And the speed lovers might not like prefer its performance.

The handling is pretty poised. The all-wheel-drive configuration adds some fuel to the grip of the car. And the torque vectoring makes every turn balanced. While the braking is similar to the standard version.

The overall performance is quite fine for the family riding. Further, the MDX Hybrid offers some good saving on fuel. It offers 28 mpg as the combined fuel mileage, which is almost 5 mpg better than the standard MDX.

The exterior designing is similar to the standard MDX models. And there are no refreshments available for the exterior design. While the new A-Spec package enhances the design. Well, it includes the diamond pentagon grille, Jewel LED headlights, LED fog lights, dual exhaust tips, 20-inch alloy wheels and the LED taillights. Further, the MDX Hybrid features the active damper system. And the electric package adds 200 lbs of weight to the total system, making it weigh 4,471 lbs.

The interior appointment is even similar in the MDX Hybrid. But it has some difference in the ingredients. The base hybrid version features premium leather sports seats with contrast stitching. While the upper trim level comes with the Milano premium leather sports seats with contrast stitching and piping. Further, the rear heated seats are even included in the top model. Further, the MDX Hybrid is not much shy to the spacing. Six to seven passengers including the driver can get seated in this car. But it is almost 7 cubic feet shorter to the actual spacing of MDX. And there are plenty of convenience spots available for a comfortable journey. Some additional interior features include a heated steering wheel and wood trim.

The MDX Hybrid borrows the dual-screen infotainment system from the standard versions. The features are same, besides the entertainment add-ons. Well, the Hybrid version gets the option for the ELS audio system with 11 speakers. Further, the Pandora and the SiriusXM radio are even available. Besides entertainment, the MDX Hybrid even features the Android Auto and the Apple CarPlay. The base model gets a 9-inch screen for the rear row. While the upper trim level gets the 16.2-inch screen.

Ahead of that, the Acura MDX Hybrid comes with 4 driving modes. While the fourth one is the Sport+ which is supposed to add some energy to the performance. But instead, it brings in some agility to the handling.

The safety features are no different than the other MDXs. The same airbags, same belts, and even the same antilock braking system. Specs are pretty fine and enough for a safe drive. Further, the only different feature is the rain sensing wiper installed in this car. And indeed it is a necessity where it rains often and without any notification.

The Lexus RX450h is a pleasant competitor for the MDX Hybrid. It is stylish, good-looking, sharper and features more specs. And certainly, it overtakes the MDX Hybrid in numerous markets.

Well, the Acura MDX Hybrid is not a bad choice for the family drivers. But it offers a few differences at a very expensive price. And that certainly relegates this car.