Quality is something that can be compromised by a number of us. But we don’t usually set at par with the beauty. And this is what Alfa Romeo has also followed. The car that we are going to discuss today is a clear example of it. And it seems like you will love it. Especially if you go for beauty.

The Alfa Romeo Giulia went into the production line in 2016. But, several times its design got rejected. And this resulted in a delayed launch.

After getting to know its features, we expected this car to be costly. The beautiful outfit, classic interior, and superb performance definitely need papers in applause. The starting price of Alfa Romeo Giulia is $72,000. There are some useful packages and add-ons available for the car. These features may definitely help in increasing its price. 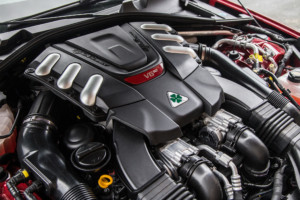 The Italian engines are renowned worldwide. Especially the ones developed by Ferrari. They are found in a number of performance cars around the globe. The Alfa Romeo Giulia Quadrifoglio is equipped with a 2.9 L V6 twin-turbo charged engine. This engine has also been developed by Ferrari. And it resembles the design of Ferrari F154 V8 engine. It’s completely an aluminum engine with each cylinder of almost 500cc. It makes a total displacement of 2,891cc, rounded off as 2.9 L.

Giulia Quadrifoglio delivers an average fuel mileage of 20 mpg. Thanks to the cylinder deactivation system available in this car. It helps to save the fuel. Most noteworthy is that this cylinder deactivation system deactivates 3 cylinders of the car when they are not needed. This helps in saving fuel. The EPA may even rise if Quadrifoglio drives only on 3 cylinders. Mind running groceries only?

A car from Italy should have smooth performance and agile handling. Steering is certainly perfect in Guilia Quadfrifoglio. The car runs sharply and smoothly whether it is a difficult turn or a long round around curve on a freeway. Moreover, the braking system works fine. From 70 – 0 mph, the car stops within 143 feet using the iron brakes. Well, carbon ceramic brakes remain optional for Giulia Quadrifoglio. 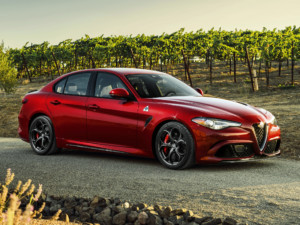 The Giulia concept, revealed in 2015, was quite attractive. The V-shaped grille design, sexy headlights, and impressive wheels design enchanted the spectators.

The exterior utilizes carbon fiber and aluminum. Unlike the standard Giulia, the Quadrifoglio is lighter. It also has improved aerodynamics. Quadrifoglio weighs 3,360 lbs which is 400 – 500 lbs lighter than a number of its competitors.

Besides the regular aerodynamic equipment, Quadrifoglio features automated aerodynamics. Like the automated splitter shuts down to let the car speed up. But on reaching curves and turns, it opens and assists the braking system by giving a down thrust of around 220 lbs.

In addition to aerodynamics, there is a thin sleek spoiler at the rear of the car. It’s an up-west kind of spoiler. And its purpose is to provide a push to the car. The 19-inch Tecnico aluminum wheels are standard. While three optional wheels are even available in 19-inch. 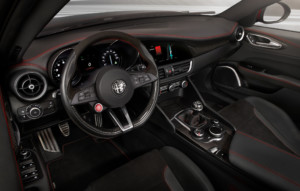 It employs subtle ingredient for the interior. It’s pretty luxury and comfortable. The steering wheel is quite gentle to hold. The seats are pretty soft and are lovable. The accent trace stitching enlightens the detailed state of the art in this car. 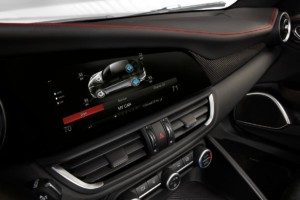 Commendable performance, elegant shape, and comfortable interior make you expect a recent technology to be running in Giulia Quadrifoglio. Though it is full of features. However, its infotainment system is disappointing. The 8.8-inch touchscreen infotainment system employed with navigation and rotary control is certainly obsolete.

It has enough to suffice the modes of the car. But it has less to explore its functionality. Rather we’ll rate it as obsolete. Besides navigation, voice recognition, Bluetooth radio streaming, SiriusXM Radio and some other amenities are standard. 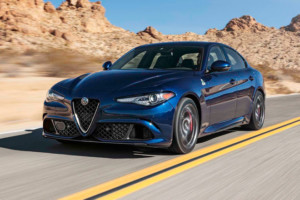 Safety authorities have given 5 stars to all the Giulia models. The Giulia Quadrifoglio features a number of passive safety measures. And these are quite enough to make the passengers inside the car safe. Most of all, the active safety includes Electronic stability control. Other safety measures are Adaptive cruise control, Blind spot monitoring and Anti-lock braking system. Furthermore, an optional package is even available for adding some additional safety features. Also, the Driver Assistance Dynamic Package adds lane monitoring. In addition, it also offers autonomous (rather semi-autonomous) braking and forward collision. Furthermore, it offers alert and automatic high beam system. Hence, it’s not wrong to say that it is a safe car. In fact, it is much better than several other cars in terms of safety. 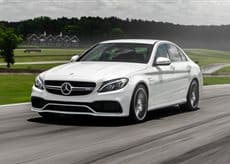 The bi-turbo V8 Mercedes-Benz AMG C63 S competes the Alfa Romeo Giulia Quadrifoglio. Though Quadrifoglio is just a V6. However, it runs way faster than the Mercedes. And even it has appointed more luxury than the C63 S. Moreover, its features are even good enough to make it a good competitor of Mercedes-Benz.

In conclusion, Quadrifoglio is a class apart, superb and mind blowing version of Giulia. A car worth 75 grand is for eccentric? No, it is for the true driver. Still, there is no harm in trying it.