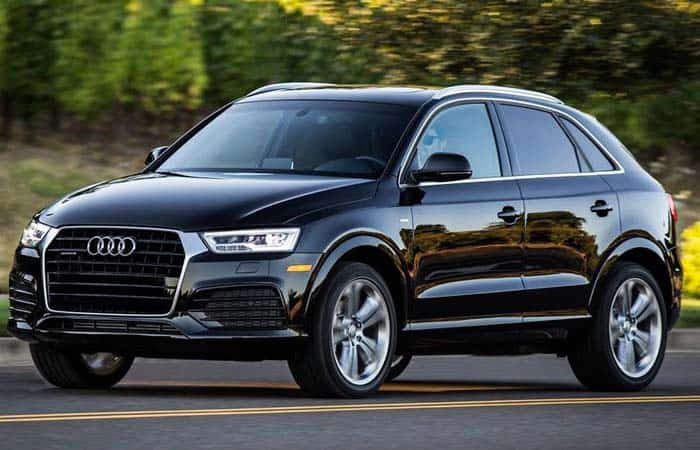 Too many automakers mean too many cars. Some make the awesome and fresh cars. While some rely on the ruins of the previously mastered vehicles. The Audi Q3 is brought up from the smaller Q-series SUVs. But this is an entirely new car for the Audi SUV lineup.

The first version was introduced in 2006. But it remained merely as the concept vehicle. It was never thought that Audi was planning to bring up a compact luxury crossover SUV. But by 2007, the plans seemed to be determined.

Well, something went fishy and the production was halted. The vehicle was not launched and the whole project was terminated temporarily. The reasons are uncertain. Some said it might have been because of the economic transmission of that time. While some said that Audi never planned to have something like an SUV. But 2009 revealed a new spark when a press release narrated that Audi is planning to go ahead with the Julian Hoenig’s design.

During the 2011 Auto Shanghai, Audi displayed the production version of the Q3. That was the first time when the commercial model was displayed. And finally, in the same year, the vehicle was launched in the market, besides North America. It was something like Audi never thought that Q3 would be a success in North America. Well, by 2015 that got some courage to introduce this SUV in the American markets.

Since then, this car is surviving the slaps of the market chill. Well, the present day model is available for as low as $32,900 only. And the available trim levels are Premium and Premium Plus.

The Audi has blessed Q3 with a pretty huge variety of drivetrains. For every market, they have a distinctive version. Like for the North American region, the Q3 is available with 2.0 L 4-cylinder TFSI engine. The drivetrain comes equipped with the front-wheel-drive configuration. While the optional all-wheel-drive or the Quattro is also available. Further, it has 200 horses making 207 lb-ft of torque. And this drivetrain comes matted with the 6-speed automatic transmission.

The rest of the world gets the 1.4 L inline 4-cylinder engine as the basic powertrain. This engine comes with 148 horses pounding at 184 lb-ft of torque. And the 6-speed manual transmission is the standard gearing system that you get with it. While the 6-speed S-Tronic automatic transmission stays optional.

The upscale models come to equip with the 2.0 L 4-cylinder engine having 178 hp of power and 236 lb-ft of torque. In addition to that, they get a 6-speed manual or 7-speed S-Tronic automatic transmission. There is also an availability of the highly tuned version of this powertrain. That even gets the option for the Quattro. Well, it gets 217 horses at 258 lb-ft of torque. And 7-speed S-Tronic automatic is the only transmission available for this version.

The diesel version Q3 is highly appreciated in the European market. The base version comes with the 2.0 L 4-cylinder engine having 118 hp of power with 214 lb-ft of torque. The mid-level tuned model has 30 more horses at 251 lb-ft. While the performance edition gets 181 horses to make 280 lb-ft of torque.

The exterior designing is pretty familiar. The Q3 gets Audi’s signature grille with the frontal vents. Well, its engine technology does not really requires such tech. But it still has it for additional cooling. Further, the cosmetics include the 18.5-inch alloy wheels, LED head and taillights, roof rails and a crossover fall. Indeed the designing is pretty common but it is attractive. Certainly, it is full of luring edges and stances.

Comfort and luxury are the basic features for the Audi Q3. The heated leather seats, leather wrapped steering wheels and gear knobs, aluminum, and wood trims are some basic ingredients for the interior. Further, the spacing is pretty fine in this car. The front and rear row offers plenty of space to sit. Along with that, there is a decent amount of space for the cargo and luggage. While the rear folding seats enhance the storage capacity in this car.

The Q3 comes with the Audi’s MMI infotainment system. Well, it is a system with the Android Auto and the Apple CarPlay. If it had these options, this would have been a wonderful infotainment system. But still, it is doing fine. Ahead of that, it is a multimedia system with car dynamic control options. For the audio options, these Bose Surround System is available for the Audi Q3.

Besides the media options, the Q3 even gets the option for the navigation. Further, the keyless ignition and stop are readily available for this car.

The Audi Q3 includes a complete package for passive safety. It has the frontal airbags, front side airbags, and the head curtain airbags. Further, these airbags are occupant sensible with the detection feature. Ahead of that, the active safety includes the ABS, EBD, electronic stability control, off-road mode and traction control. While the security feature includes the Anti-theft alarm system with the engine immobilizer.

In addition to that, the driving dynamics include the side Assist, parking assistant package with sensors and cameras, tire pressure monitoring system and hill descent assistant.

In some markets, you would find the Volvo XC40 sitting next to the Audi Q3. The Volvo XC40 is even the user choice with a decent powertrain and remarkable interior setup. In a way that is a perfect competitor of the Audi Q3.

Well, the Q3 is doing fine with its performance, exterior designing, and the interior setup. Even the convenience points are quite remarkable in this car. But the only thing that hinders its progress is the pricing issue. While it seems like Audi would take care of it momentarily.