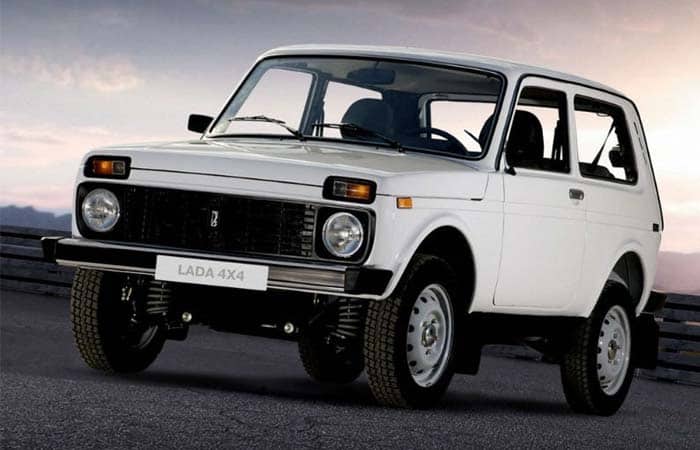 One of them is the Lada 4×4. It was 1971 when the USSR government gave the order to a couple of Russian automakers to build a car that could be utilized in rural areas. The government then was eyeing to replace the already existing vehicles and to bring in a change in the vehicular index. Ultimately, the selected automakers started working on a design that could be inspired by the rural citizens.

Well, that same Niva was not only appreciated in Russia, but it even found its customers in Europe and a lot of other markets. Even the General Motors got impressed by that design and they even took some share of that vehicle.

The Russians had to change the title of the vehicle because of some legal clause. And that forced them to rename it as 4×4. Well, the present day Lada is available in 5 different models. Further, the base model is available for as low as $12,280. And the Bronto takes the highest rank among all the models.

Under the hood of Lada 4×4, there is a 4-cylinder 1.7 L gasoline engine. This is the only drivetrain available for this car. Well, besides this option, there used to be a couple of diesel versions also. But they have been discontinued a decade back.

This powertrain is rated at 83 hp of power with 95 lb-ft of torque. The power seems to be under-rated for such a big engine. As the cars with the similar drivetrain have almost more power than the Lada 4×4.

When it comes to the handling, the base models do not really seem to be friendly. But the upper trim level offers some neat handling abilities. Especially the sporty Bronto adds in some more fuel to the steering and movement skills because of its firm suspension.

Overall, the Lada 4×4 is just a decent car that is certainly not designed to be driven in cities. It is meant for pavements and country-sides.

The 4×4 is based on a unibody platform. The structural design has attracted many automakers to follow the technique for their SUV platform. Such as the Suzuki Vitara is closely formed under the structure of the Lada 4×4.

Well, the 4×4 has been designed as the box. The frontal design is totally horizontal with the round halogen lamps and a fiber grille. The fog lamps are installed above the grille with the side indicators. Further, the fall resembles plenty of obsolete SUVs. The base models are available with the steel wheels and 3-door design. While the upper trim levels come with the alloy wheels and 5-door structure.

The Lada 4×4 Bronto features a sporty suspension, off-road wheels, and an aggressive shape. That is certainly the most exclusive version among all 4×4.

There interior of the Lada 4×4 offers plenty of space to sit. Even you get a lot of space for the cargo. In a way, this car has been designed to carry stuff. Further, the cosmetics are pretty basic. Like you get the cloth seats, fiber accent and that is all. While the cushioned cloth seats are an add-on option available for this car.

Though the seats are pretty basic, they do not feel uncomfortable. Certainly because of the spacing they feel pretty relaxing. Especially for the long journeys, they prove to be very much exclusive.

The Lada 4×4 features only the audio system with radio. That is certainly all that is available for this car. While if you need the parking cameras, infotainment system or anything else you would certainly have to visit the aftermarket. Even if you are planning to get the premium sound system, you might need to have a look around for the ones adjustable. Certainly, with this car, you would have to compromise with the technological features.

The Lada 4×4 has every basic safety equipment installed in it. It has the airbags and the adjustable seatbelts. Even its structure is strong enough to reduce the collision impact. But that is all you can find in this car.

Rest of the safety is based on your driving.

The cheap price, lower maintenance cost, and decent fuel mileage are some cool aspects of the Lada 4×4. But if you are seeking comfortable and relax driving environment, then you certainly would have to shop around.