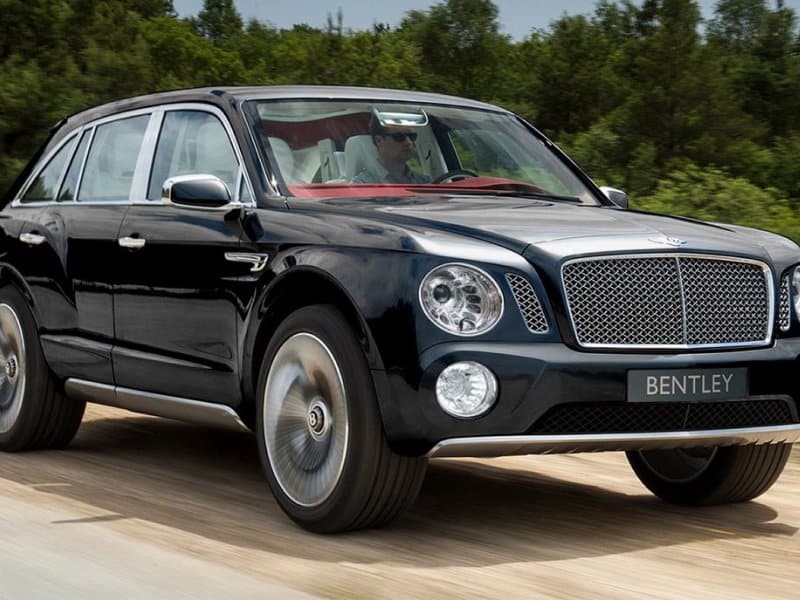 This five-door luxury SUV is a four-seat vehicle made with a unibody construction. There’s also an option for having five seats. It is built with a Volkswagen Group W12 engine and full-time all-wheel drive. Based on the Volkswagen Group MLB platform, this is the same platform that was used in the second-generation Audi Q7 as well as in Porsche Cayenne, although 80% parts are totally unique. The said platform is powered by a 6.0-litre W12 engine producing 600 hp. The Bentayga is recognized as Bentley’s first production SUV. It evolved from the 2012 Bentley EXP 9 F concept car with the production version being announced in 2013. In the next few years, it was has been redesigned a number of times, aiming to appear more conventional. The final design, however, was only presented in 2015.

It was officially introduced in September that year at the Frankfurt Motor Show while production started two months later as a 2016 model. The name Bentayga was inspired by the word Taiga, which is the world’s largest transcontinental snow forest. In Swahili, it means means “carried interest”. Volkswagen actually planned for Bentayga to be manufactured at the Volkswagen Bratislava Plant in Slovakia. This is the factory where all other models based on the platform are generated. An agreement, however, was reached with the British Government for the car model to be produced at the Crewe factory in England instead. For the first edition, a total of 608 units will be produced and 75 of them will be sold in the United States market.

The W12 Bentayga’s competitive performance includes a top speed of 187 mph (301 km/h). Despite its heaviness, the Bentayga’s body roll is reduced courtesy of the 48 volt electrical system that control its electronically controlled active anti-roll bar (EWAS), generating a smoother ride. It runs on Bentley’s new twin-turbo W12 engine, the first model to ever receive said engine. For now, the W12 will be the only engine option for this model as it’s capable of bypassing a cylinder row if required. The 6.0l, twin-turbo will have an estimated 600 hp (608 PS; 447 kW) and 664 lb·ft (900 N·m) of torque and will move the Bentayga from 0-62 mph (0-100 km/h) in under 5.0 seconds.

Furthermore, the 8-speed automatic transmission splits torque with 60% to rear, and 40% to front. More importantly, Bentayga can tow up to 3,500kg with incredible ease and strongly surpasses all kinds of off-road conditions and other unexpected scenarios in its stride. On the other hand, Bentley has confirmed the Bentayga to be launched in 2017 will be Bentley’s first production of plug-in hybrid. There’s also a consideration to also get a diesel engine. For 2018, a V-8 version is planned to be produced. The model’s price is estimated at around $200,000.

The wheelbase is at 2,992 mm (117.8 in), length is 5,141 mm (202.4 in), width is 1,998 mm (78.7 in), and the height is 1,742 mm (68.6 in). The layout is longitudinal front-engine, four-wheel drive and the body style as mentioned above, is a 5-door SUV. The design has been criticized prior to the launching of the final model, that’s why it underwent lots of redesigning in the previous years. With the polished look, critics are more positive. The Bentley Bentayga is a combination of class, uniqueness, and strength. At least that’s what comes to mind upon seeing the model’s overall exterior. The design is also a mixture of luxury and boldness, a combination car enthusiasts certainly look for in an SUV.

Amazingly, the exterior of the Bentayga boasts a mix of materials, including an advanced aluminum exterior. This perfectly covers the model’s body and structure that already blends aluminium castings with an impressive high-strength steel. The surfaces are flawless and every curve and line is highlighted by Bentley’s signature sharp lines. The front wings are extra remarkable brought by the innovative superforming technique that was adapted for the Bentayga to stand out. The LED lamps add to its already attractive body frame, in addition to the integrated washers in order to fit flush the body. The optional 22” fully-forged and machined aluminium wheels are the biggest for a Bentley production. Together with the sizable brightware, these details enhance the SUV’s impressive physicality. With this revolutionary masterpiece, many predict that this model can increase Bentley’s sales by a third or more as it will finally enable car owners to drive over curbs. May it be for a rough adventure or a friendly family use, the Bentley Bentayga surely addresses almost all factors one is looking for an SUV.

The interior of the Bentley Bentayga is as exhilarating as the exterior. For starters, it has a full-leather Interior with a choice of 4 Veneers and a full-leather Interior with a choice of 15 Hides. The acoustic IR front screen and acoustic side glass are all heated for maximum comfort with a choice of 17 piano-finished paints for one’s aesthetic preference. The interior can also be described as highly polished and sophisticated. It is finished with the most exquisite materials, giving it a uniqueness that can be felt when inside the vehicle. Its presence is strong and it provides a feel of utmost relaxation and luxury. There’s also the cockpit architecture based on double Bentley wings generating an impression of symmetry and harmony. The veneers made of beautiful wood are meticulously chosen to provide the interior the classiness the Bentayga aims to spread. There’s a robust metal detailing with precision finishes that add to the sharpness of the interior and giving it a unique edge among competitors. The panoramic roof serves as a source of light that makes the whole cabin positively bright. This adds to the sense of space, and so much more.

Also, the SUV’s Event Seat definitely makes every ordinary day feel like a special occasion. The Event Seat is the patented sliding and folding seat that is trimmed and finished in leather with diamond quilting for maximum relaxation. With this, you can enjoy views around you. It is shaded by the tailgate during the day while shaded by the built-in stage lighting from above during the evenings. The seat slides away easily when you’re ready to go. Further serving convenience, it can also be used as a luggage divider.

As much as the Bentley Bentayga is classy and luxurious and equipped with tough-to-beat features, it also focuses on the importance of safety. One standard safety feature this SUV applies is anti-lock brakes. This automatically sense when a tire has stopped rotating under severe braking, which will then adjust the brake pressure to enable the tire to rotate, enhancing the ability of the vehicle to turn while using the brake. Next is the stability control, which intelligently senses when the vehicles handing limits have been exceeded. To help prevent the driver from losing control, this safety feature then decreases engine power or applies select brakes.

During a collision, there’s the seatbelt pretensioners that tighten seatbelts by default in order to place the passenger in the optimal seating position and thus, avoid severe consequences during accidents. Of course, there’s a competitive security system that’s designed to expect and detect unwanted vehicle intrusion. This is because the Bentley Bentayga is geared up with an ignition disable device that will prevent the engine from starting should there be a break-in and the correct original manufacturer key is not used. Of course, there are side impact airbags, overhead airbags, and front-impact airbags. With all these safety features available, the Bentley Bentayga is a much-needed and a much-wanted SUV available in the market today.

The Bentley Bentayga has some equally incredible SUVs to compete with. Some of these are the fully loaded Range Rovers and AMG G-wagens, the Rolls-Royce SUV, as well as the LaForzas and Lambo LM002s. Each vehicle has its own uniqueness, strength, and highlights that will make it so tough for car enthusiasts to make a decision.