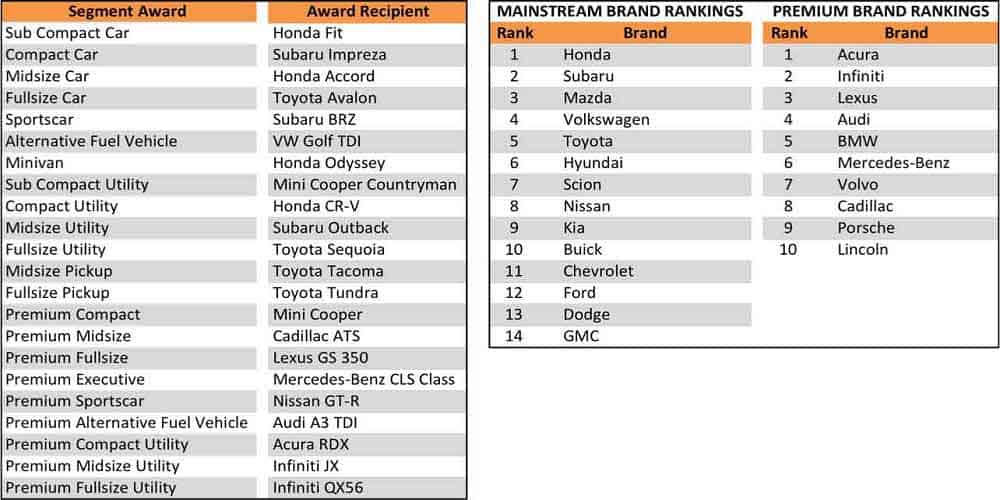 When it comes to making investments, automobile aficionados and collectors develop an interest for cars with best resale value, regardless of time and specifications. Purchasing a vehicle is a somewhat serious commitment, and buyers like to take their time before making a pricey decision.

But what are the best cars that hold their value and how can one prevent car depreciation?

Forbes claims that, after only five years of moderate usage, a $50,000-worth vehicle will end up being resold at a price of around $19,100. Since second-hand auto sales are on the rise, it’s only natural for one to know what to expect, when paying big bucks for a model that may or may not complete user expectations.

Fortunately, ALG, a company specialized in estimating resale values of vehicles, has created an annual contest that goes by the name of the Residual Value Award. In 2014, Honda became the Mainstream Brand and Mercedes-Benz the Premium Brand, according to the rating system developed by the company. Honda was closely followed by other imposing brands, such as Toyota, Subaru, Hyundai, and Mazda. Since Mercedes-Benz received its award for luxury automobiles, its competitors consisted of Acura and Audi.

Inspired by the classification performed by ALG, Yahoo Autos published an article about the seven models that can be considered the year’s top residual winners. Out of these, three are small vehicles (Hyundai Accent, Mazda 3 and Kia Soul), two are sports cars (Chevrolet Corvette and Chevrolet Camaro), one is a premium executive automobile (Porsche Panamera) and a single one is a full-size vehicle (Toyota Avalon). To quote from Yahoo Autos, the same organization announced the top most favorite possible choices for the 2014 awards, in five new categories:

The Telegraph, a widely acclaimed British publication, put together a classification of its own, which is mostly based on a ranking performed by CAP Automotive, focusing on the highest retention values of car brands. Motor cars with a high resale value that stand its ground after 3 years of usage or 30,000 miles should probably be chosen from the following vehicles:

If you intend to sell your vehicle and purchase a different model in the future, we suggest you pick one of the automobiles we’ve already talked about. If on the other hand, you are interested in buying a model that lasts for many years, thanks to its highly feasible and reliable features, CBS Money Watch recommends you pick one of the following vehicles:

To conclude, we’ll say that values of vehicles decrease naturally, regardless of rough usage or the age of an automobile. The longer you wait to sell it, the more disappointed you will be, because of its final price. In today’s auto business, it’s better to choose a reliable vehicle which lasts for years and which, when the time comes, can honorably be retired by its owner.

Also, while selling your car, it’s better to sell to a private party. Used car values are much higher than trade-in value, and you can get an estimate by using KBB’s tool to see what you can get for your vehicle.