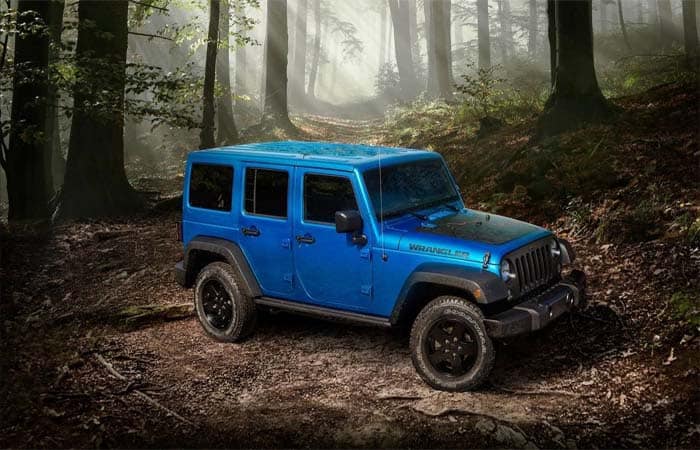 The Jeep has a varied history of automobile production. The exact dates of the Jeep production cars are still unknown. Though the company is existing since 1941. But some of its cars date back in the beginning of the 20th Century.

Well, those were specifically the military automobiles and were mainly produced during the World Wars. In the Second World War, the CJ became famous among the soldiers because of its unbending structure and powerful mechanism. After the war was over, that SUV was brought into the commercial line. And since then it could be seen in any shape, color, and mechanism.

The Jeep Wrangler is even one of the cars living on the concepts of the CJ. Wrangler was introduced by the American Motor Company in 1986. Particularly it was narrated that it is the successor of the CJ. But Wrangler was not able to encompass every ability that CJ had.

The first generation of the Wrangler given the production title of YJ. It was to make it real that Wrangler is the qualified successor of the YJ. Later in 1997, the second generation Wrangler was introduced. The YJ production title was swapped with the TJ. This generation rolled on the streets for 9 successful years.

The Jeep Wrangler has a wide market throughout the world because of its close relation with CJ. The base price of this SUV is $23,995. Further, there are 11 models available.

The Jeep Wrangler is one of the classiest SUVs. Its construction and mechanism unitize the hard performance system. But with time, the Wrangler has even become a tamed SUV. Presently it is less wild and aggressive as it used to be in the past.

The present-day Wrangler comes with the pet 3.6 L Pentastar V6 engine. This is a gasoline toy that comes with 285 horses and 260 lb-ft of torque. Well, this is the maximum displacement available today in the Jeep Wrangler. A lot of guys have modified the mechanism of this SUV. But we would recommend to run it as stock.

This Pentastar engine enables the Wrangler to hover 0-62 mph within 7.5 seconds. Well, that is a pretty figure for an off-road ride. On top of that, the track best of the Jeep Wrangler is 109 mph.

Away from the gasoline world, we meet the 2.8 L inline-4 cylinder diesel engine. This is a master blaster available with 177 horses and 302 lb-ft of torque. Well, you really can pound the rocks with these specs.

The Wrangler is a hard companion. It would not leave you along even on the dusty peaks. And that is why this SUV is preferred by a number of armies. One good example could be extracted from the Call of Duty: Modern Warfare 3. The Modern Warfare 3 commercial featured Sandman driving away from the enemy forces in the Jeep Wrangler. Well, that is a hell of a thing.

Well, let’s get back to the track. The Wrangler is equipped with a flexible suspension. It would not let you go derail on any sort of hill. And in the city, that is as sweet as honey. Steering is even agile.

The Jeep Wrangler is dressed up in the same way as it was in the World War-II. It has the same designing, but modern cosmetics. The Wrangler was born on a battlefield. It is a warfare vehicle. Its structure today even depicts the stiffness and strength of a soldier.

It comes with steel bumpers, dome vented hood, rack rails and tread plates. The shock absorbers and the axle are even as hard as a soldier. The 16-inch steel wheels are available with the base models. The upper trim gets the 17 and 18-inch aluminum wheels. The base model gets the standard off-road tires. While the upper trims enjoy the premium BF Goodrich and Bridgestone off-road heavy duty tires.

The Halogen headlamps are standard in the Jeep Wrangler. But the top notch and the 4×4 versions get the LED headlamps. After all, those are the top members of the Wrangler family. And certainly the richest ones.

Jeep can keep the same exterior design for the Wrangler that was in the World-War-II. But it cannot keep the same interior. The interior definitely needs to be improvised to enhance the comfort level of the driver and the passengers.

Leather and cloth seats have become standard for the Wrangler. Further, the inclusion of the heated seats has made the winter journeys easy. And along with that, the availability of the bucket seats is even a fantastic facility. Well, you fold the rear seats and can make room for carrying a wholesome of luggage with you for a picnic.

Why would you convert the roof on when you are able to have some fresh air? But not every atmosphere is healthy. And you would certainly have to take the roof on. For that, the Jeep has installed the Air Conditioner in Wrangler. It does not seem strange but for a number of Wrangler lovers, it might be weird.

The Jeep Wrangler does not feature much of the tech. It just has some necessary technology that is required for the safe and smooth driving. Like it has the auto-dimming mirrors with reading lamps. It even has an information center. But it is mainly concerned with the vehicle information. Well, you even get the 6.5-inch touchscreen infotainment system with SiriusXM Satellite Radio.

Further, it has a pretty decent sound system. And there is even an option for the Alpine 9-speakers sound system. Well, navigation is a necessary feature for the off-road vehicles. But this is optional in Jeep Wrangler.

The Jeep has not compromised about the safety of the Wrangler. The Wrangler has everything that an SUV should have for the occupants. It has the advanced multistage front airbags, electronic roll mitigation, and the electronic stability control. Further, the hill start assistance, speed limiter, and traction control are some other features available for safety as well. The tire pressure monitoring system adds more safety to Wrangler. Especially when it is ridden off-road.

Well, if you are looking to get something that could make your off-road journeys memorable, then the Jeep Wrangler is the best option. But if you need something modern and with more features than you would have to shop around.