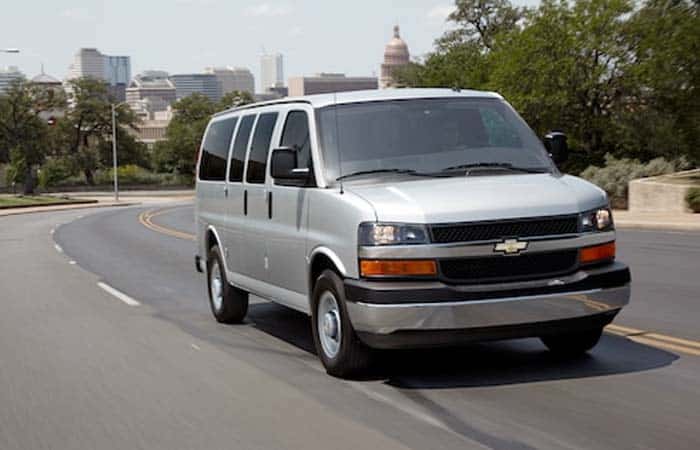 The Chevrolet Express is ranked among the highly grossing commercial vehicles in North America. The Express is the sibling of the GMC Savana that is even a commercial van. Well, these are the business vehicles which much of their strength implicated in the heavy duty jobs.

That was 1995 when the Express and Savana were introduced. The Express was introduced to replace the Beauville, also called the Chevrolet Van. The Chevrolet Van was also a heavy-duty business runner that remained in service for almost 31 years. But after such a long time, it became necessary to discontinue the Van and bring in a new brand. Especially, the Ford vans made it mandatory to bring in a new generation under a different badge. Because the competition got stiffer. At this time, North American markets were no relying on the purely American vans.

The Express had been improved time to time. Almost in every year of its service, some improvements had been introduced for this car. The recent improvement had been made last year for the present year models.

The commercial vehicles are expected to have some muscular drivetrain. Since the launch of the first commercial van, the heavy-duty engine, reliable transmission, and quick steering abilities were incorporated.

Well, the same fashion is followed for the Chevrolet Express. The Express comes with the 4.3 L V6 gasoline engine with 276 hp of power with 298 lb-ft of torque. This is certainly the base version of this van. And it is among the highly grossing powertrain for the passenger vans. It is because, it is neat, fast and economical.

The V8 is the next available gasoline powertrain for the Express. The 6.0 L V8 engine comes with 341 horses galloping at 373 lb-ft of torque. This tuning is not just available for the gasoline V8 but it even goes with the flex-fuel V8. The flex-fuel version is designed for the CNG and LPG.

Well, nevertheless, the V8 Express is the outdated fella of this whole series. Though it has been introduced recently, still it sounds like an old monk. Further, it is even the performing version of the Express series. Generally, the Vans are not tested to lap the quick acceleration or record their track best. But we did it. The V8 Express lapped 0-62 mph within 8.9 seconds. That is certainly fine for such a massive van. Ahead of that, the Express topped at 100 mph. That is indeed subtle for a passenger and cargo van. Because you do not need speed and acceleration here. Instead, you require the load pulling abilities.

Besides the gasoline and flex-fuel drivetrains, the Express is also available with a diesel engine. It the 2.8 L Duramax inline 4-cylinder diesel engine. This powertrain has 181 horses revving at 369 lb-ft of torque with the 8-speed automatic transmission.

The Chevrolet Express is available with the regular and extended wheelbase. The regular wheelbase gets the nominal length with the standard driving abilities. While the extended version gets a bit lengthy.

Cosmetics are pretty simple to Express. It has halogen lamps, steel wheels, chrome and carbon fiber bumper. Away from this all, there are some exterior options available for both the configurations. Like, assist step, heated mirrors, antenna, rear door window glass, tinted glass and some other.

The interior setting is simple as the standard vans. The Passenger Van gets the spacing for 12 people as standard. While you can get 15 passenger seating for $475. The cloth bucket seats are standard for every version. Further, the amenities include vinyl seats, leather-wrapped steering wheel, rear air conditioning, illuminated visors and the commercial customer bin.

Though it seems pretty much enough for a van. But the competition offers some eloquent choice for the interior appointment. Especially, the Ford and the Mercedes spend a lot on setting the interior.

The Chevrolet Express gets the option for the 7-inch touchscreen infotainment system. With this system, you get the option for power outlets, useful navigation, and USB connectivity. Further, the Bluetooth connectivity is also available for this van. Well, ahead of this all, you can make your passengers enjoy with the option of the 4-G LTE Wi-Fi. It can support up to 7 devices. If you have all 12 people be seated in the van, then you might have to ask 5 of them to turn on their Wi-Fi in the other trip.

The myChevrolet Mobile App offers some cool features. Like, you can start and stop the van, can navigate, run the diagnostic tests and keep the parking recalls.

Under the column of active safety, the Express gets the options for tire pressure monitoring, post-collision mitigation, and parking assistance.

The Ford Transit is the closest competitor for the Chevrolet Express. Well, the Transit is a powerful van, with better mileage and stylized design. Though the Express is not a weak option, it seems more like a vintage.

But still, the Express is an ideal choice when you are looking for a commercial vehicle. It has an economical price, decent structure, and acceptable fuel mileage.