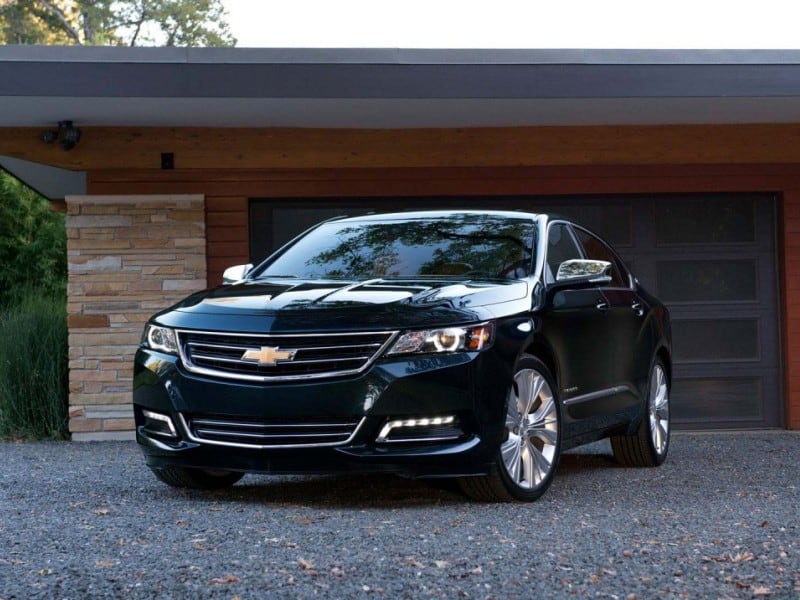 The Chevrolet Impala is a full size sedan that generally made its debut in 1958. Its name is derived from the South African antelope. Through 1965, this line of Chevy vehicles became the best-selling automobile in the United States, where it competed against vehicles such as the Plymouth Fury and Ford Galaxie 500. Therefore, it has remained as one of Chevrolet’s most successful vehicles for many decades now and with the latest design and technology it probably will continue to dominate the sedan market!

The first generation was introduced in the late 80s as a 2-door convertible and hardtop vehicle, but after achieving great success soon Chevy also introduced sedan models of the impala. Nearly four generations were built carrying the same design, but it was the fifth generation model that became Chevrolet’s top selling vehicle. The vehicle during the early 70s went through a complete redesign and looked more muscle and powerful than ever.

The sixth generation model was introduced a few years after, which were narrower, taller, and shorter in length than before to meet the changing demands of the industry. One redesign led to another and it was finally the eighth and ninth generation models that became the ideal designs of the impala. However, the latest tenth generation model became the most successful of all, due to its exceptional performance, reliability, styling, and safety.

All 2015 Impalas come equipped with a front-wheel drive and six-speed transmission. If you are a manual transmission lover, you will be glad to know that the manual-shift mode can be activated through a switch on the shift lever. Although the transmission is not as seamless as compared to GM’s earlier benchmarks, it reacts quickly enough when provided the right amount of pedal.

Chevrolet offers only two powertrains this year, with the former Impala Eco mild-hybrid being dropped. The base models of Impala now are carrying a 2.5 liter four-cylinder engine, which boasts a decent 196- horsepower. The engine performs well enough in most driving conditions, and with the vehicle’s voice cancellation system, engine noises that are disturbing are cancelled out effectively.

In situations where swift acceleration is needed, however, the four-cylinder lacks juice and does not gather speed quickly enough. Nevertheless, if strong and smooth power is what you are looking for, you will find GM’s 3.6 liter V6 more than sufficed. This powertrain is standard in the Impala LTZ and LT and offers an impressive 305 horsepower.

Not to mention, the engine is specially modified for CNG duty. The CNG tank carries an equivalent of 7.8 gallons of gasoline and delivers an approximate 150 miles of city range, which is not bad considering the fact that the output of Impala drops significantly when running on CNG. The vehicle runs on CNG by default, but a dash-mounted switch allows you to change fuels as you desire.

The new Chevrolet Impala looks nothing like its uninspiring model from last year. With a long hood, swept back roof, and sculpted front end, the Impala now has a serious presence, showcasing nothing but pure class. On the front, the LTZ models boast new HID headlights and premium LED daytime running lights, whereas the base model doesn’t hold back as well featuring brand new low-profile project-beam headlights.

The 2015 Impala, at a glance, gives off an overwhelming sense of contemporary luxury, which is further enhanced by an array of infotainment and user-convenience features. Regardless of the features, the exterior is without doubt Chevy’s best recent efforts. It can be said that the design of the Impala is a blend of the latest generation Chevrolet Camaro and the tenth generation impala.

It is because of this redesign that the vehicle looks incredibly sporty and attractive. But, that’s not all. The vehicle even shares a few styling features with the Traverse and Malibu at the front and combines sport with practicality in the best way possible. Therefore, there is no doubt that Chevy has done its due diligence in terms of styling by introducing mingling looks while keeping the brand distinct from its other famous models.

On the inside, the Chevy Impala feels more like a luxury or premium sedan. Cabin materials are upscale and attractive, while its large dashboard is notable for its well-executed, smooth, and flowing design that flows into the door panels, therefore creating a wraparound effect which has become GM’s trademark.

Upper trim models offer leather seats and an 8-inch touchscreen command system in the center of the dash. Chevy, unlike some of its rivals, does not feel the need to make all system controls touch-oriented, and allows settings such as fan speed and climate to be changed easily through the use of dials and buttons.

The seats are attractive and comfortable. Not to mention, the generous wheelbase gives the new Impala some serious passenger space both in the front and rear, allowing you to have a cross country trip in absolute comfort. That is what most people expect from large sedans, and the Chevy Impala certainly does deliver.

In addition, the wide seats offer a range of upholstery options, which includes cloth, leather, a vinyl/suede combination, as well as a cloth/suede option. If you are looking for a particularly upscale appearance, then there is no doubt that the vinyl/suede combo is the best available option to choose from.

The new Impala comes in LS, LT, and LTZ trims, with only the latter offering the powerful V-6 engine. The LTZ brings with it standard a rearview camera, 19-inch wheels, ambient lighting, leather seats, pushbutton start, parking sensors, a power passenger seat, and a sun roof. It also includes a bunch of safety features (also standard) such as a lane-departure warning system, forward-collision warning, and blind-spot monitors.

The Impala LT provides a combination of vinyl and cloth upholstery. It offers a passenger seat with power height adjustment, a fully powered driver seat, and a CD player bundled with an LCD audio screen. Options include a power passenger seat, 19-inch wheels, a rear view camera, Bose audio with 11 powerful speakers, microfiber or vinyl seats, pushbutton start, navigation, and a sunroof. Most of the safety features that are standard on the LTZ are also offered as optional on the Impala LT.

Moreover, both the LTZ and LT come standard with Chevrolet’s infotainment controller called MyLink. The brightly colored icons on the touchscreen give you access to a wide range of connectivity and streaming options, allowing you to stay connected and updated with the world on the go. All 2015 Impalas come standard with 18-inch wheels, power windows, cruise control, locks, and mirrors. When it comes to the LS, however, the options offered are fewer, which only include rear headrests, rear parking sensors, and a cargo net.

Rear parking sensors are optional on the Impala LT and LS. An Advanced Safety package with forward collision alert is also optional, as is a rearview camera, blind-spot monitoring, rear cross-traffic alert, and a lane-departure warning system. All of the abovementioned items are standard on the LTZ, except for the automatic braking feature, which intervenes and applies the brakes to lessen the severity of a crash or to help avoid it completely.

According to crash tests carried out by the federal government, the 2015 Impala has the potential to deliver top-quality safety ratings. It has already scored five stars each for total frontal-impact, total side-impact collisions, and overall crash protection.

Even the Insurance Institute for Highway Safety has awarded the Impala its top rating of ‘good’ for the basic frontal and side impact tests they have done so far. In IIHS testing, Impala’s optional automatic braking and frontal collision warning systems proved effective as they earned an impressive rating of ‘superior’.

The Chevrolet Impala arrives in a new form this year, boasting a sharp new suit and an interior filled with creature comforts and technology. Not to mention, it offers eye-catching design, plush-ride manners, ample space for cargo and passengers, helpful features, and so much more. Therefore, it yet again stands out in the full-size sedan segment which includes competitors such as the Toyota Avalon, Dodge Charger, Chrysler 300, as well as Ford Taurus.