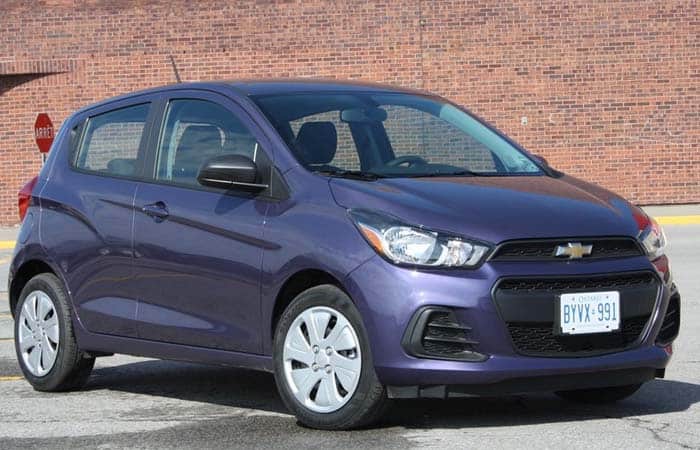 Not every time the supercars and the hypercars lead the race. Though they seem incredible spectacular, they do not have the ability to save fuel, require less maintenance and take less space to run.

Well, generally the city cars are the ones that take the lead. Because they are economical, require less fuel to run and want less maintenance budget. And every nation has its own glorious automobile manufacturer that builds the economical city cars.

The Chevrolet has its own long history of the self-created and rebadged city cars. Well, the one notable among the rebadged versions are the Chevrolet Spark. It was previously made by the South Korean Automobile manufacturer, Daewoo. And it was known as the Daewoo Matiz. Well, after General Motors took over the Daewoo, they found Matiz to be quite beneficial. Its design, performance schedule, and the interior impressed the GM and they took it over to North America as Spark.

In 2005, the Spark got its formal entry into the market. Though the title Matiz was still in, but a lot of European countries got it with the new name. Certainly, that was the second generation of this car. While the first was introduced in 1998.

Soon after that, the Spark got a drastic improvement and was launched as the third generation Spark. It ruled the streets for 6 years and then it entered into the fourth generation which is presently active.

A number of copies have been made for this car. Some had the same exterior, while some other had the same interior design. And among those, there were some that were exactly the same as Spark.

The Chevrolet Spark offers a pretty urbanized drivetrain that it quite sufficient for saving fuel. The entry-level version gets the 1.0 L inline-3 cylinder engine. It is the kind of a baby version available among all the Chevrolets. Well, this drivetrain offers 74 hp of power with 70 lb-ft of torque. With this babysitter, you can definitely reach the heights of fuel saving. But you can never touch the sporty meter with this gentle lady.

When you travel to North America, you will meet the upscale drivetrain of the Chevrolet Spark. It is the 1.4 L inline-4 cylinder engine with 98 hp of power and 94 lb-ft of torque. Well, in a way this would be the performance version of the Spark series. Though, these cars are not really meant for racing. But who knows that when would Spark appear in the hatchback rally races.

Well, we tried it and she gave her best at 70 mph. And she took 10.8 seconds to roll from 0-62 mph. Indeed that is not bad for a city car ranging below 100 hp of power. Further, both of these drivetrains are available with 5-speed manual or CVT.

All that mattered us was its handling. Our city ride was awesome. It turned over every corner diligently. And the braking is even quite impressive. The Chevrolet Spark stopped from 70 – 0 mph within 177 feet. Well, that is really important for a city car to have strong braking capability. Along with that, the poised handling has increased the scoring of this car.

Overall, Chevrolet has improved Spark a lot. As compared to its previous generations, this one is quite agile.

The Chevrolet Spark is a tiny little fella. It is certainly shorter than the standard cars in North America. But it does qualify as the economic car in a number of Asian regions. The Spark is 143 inches long and 58.4 inches wide. It is more like the Japanese economy hatchbacks with the underpowered drivetrain.

Well, the cosmetics include fog lamps, halogen headlamps, body color door handles and the sunroof. The standard models come with the steel wheels. While the upper trims come with the 15-inch alloy wheels. And they even include the rear spoilers.

The black chrome hides are available in the top models. And the finishing is done quite neatly. The rear gives a pretty flat look. Well, that does not give an awkward appearance.

After knowing about the improvements in Spark, it was our desire to have a ride in this car. Once we got in, we met some neatly appointed interior. The base model includes the clothed seats and carbon fiber trim. While the upper trim levels get the leatherette seats and leather-wrapped steering wheel.

The front seats have sufficient space for the driver the passenger. While the rear seats offer a very less space. You cannot really get in the six feet tall people in the rear seats. They would not really strike their head in the roof. But they would certainly hit their knees in the front seats. Further, the cargo offers 27.2 cubic feet of space. That is enough for a hatchback.

Chevrolet has intelligently invested in the technological features of Spark. Nowadays, the tech specs are fancied more than the performance. Especially, the teenagers love the telematics more than the sound of the engine.

The Chevrolet Spark comes with the 7-inch touchscreen infotainment system. The system gets the application of Apple CarPlay and the Android Auto. Further, this central entertainment zone has the SiriusXM satellite radio, Bluetooth stereo, and telephony. While the OnStar Turn by Turn navigation is optional.

Chevrolet has included a number of airbags in this car. Further, the seatbelts are fine and LATCH system is even included. Further, the Spark features safety cage to reduce the collision impact.

Well, the parking assist, rearview camera, pre-collision alert system and the lane departure monitoring system adds more sense of safety to this car. And the electronic cruise control is yet another driving assistant in this car.

The Fiat 500 is one of the closest matches of the Chevrolet Spark. Although there too many global competitors available. But the 500 has some close specs. The Fiat 500 has better performance as compared to the Spark. But it is not that much attractive.

A cheaper price tag, smooth performance, lower fuel mileage and neat interior offers a blistering impression. Indeed, she is a fun to drive a car.